Presenting the Spin
Sep 25, 2012
CAR BRANDS IN THIS ARTICLE

At the 2012 Indonesia International Motor Show, which is currently ongoing until September 30, General Motors (GM) Southeast Asia made the regional debut of Chevrolet's new subcompact MPV, the Spin.

The Chevrolet Spin will be manufactured at GM's Bekasi plant in Indonesia, which is scheduled for completion in the second quarter of 2013 and will have an annual production capacity of 40,000 units. The biggest news--to us, at least--is that besides selling the small MPV in its domestic market, GM Southeast Asia has confirmed that GM Indonesia will also ship the Spin to other countries in Southeast Asia, including Thailand and the Philippines, while simultaneously exploring other additional export destinations.

Though developed and designed by GM's engineering and design center in Sao Paulo, Brazil, GM Indonesia and its customers also had some significant input on the Spin before it underwent extensive testing in four continents.

According to GM Southeast Asia, the Spin has a 2,620mm wheelbase--140mm shorter than the Orlando compact MPV's 2,760mm--and yet it can seat the same number of passengers (from five to seven). Like the Orlando, the Spin will also reportedly have theater-style seating to ensure that the occupants in all rows get a clear view of the road ahead while maximizing space. There are also up to 23 configurations for the seats, giving the Spin a cargo-carrying capacity of up to 1,668L--or 74L more than the Orlando's 1,594L with both its second- and third-row seats folded flat.

As for the powertrain options and specifications for the Indonesian-market Spin, these will be announced closer to its launch next year.

"The Spin has been developed to meet the needs of fast-growing Southeast Asian markets and strengthen Chevrolet's presence in the region," said GM Southeast Asia, GM Thailand and Chevrolet Sales (Thailand) president Martin Apfel. "The Spin's unique design, flexibility and agility will make it one of the most popular products from Chevrolet in the coming year." 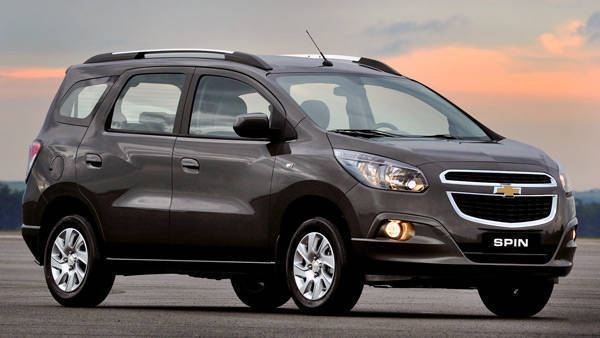