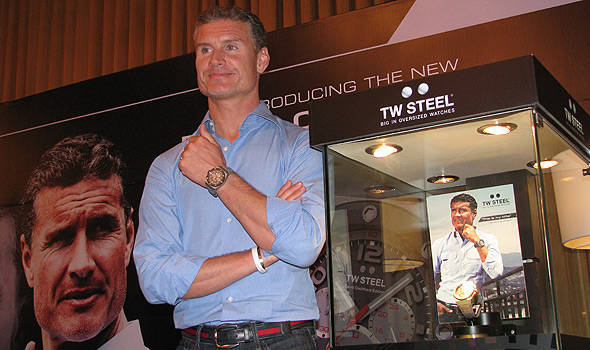 No less than ex-Formula 1 driver David Coulthard graced the launch of his namesake watch by Dutch watchmaker TW Steel in the Philippines less than four months after it was first unveiled in Monaco.

TW Steel watches are popularly known for their oversized design. During the Philippine launch, Coulthard poked fun at himself by saying that his namesake watch is as square as his head. The 40-year old Scotsman had a say on the colors used on the watch.

"Even though it's my signature watch, I didn't want it to make any big reference to my name or the design of my crash helmet. I wanted it to be something that I can wear on any occasion," Coulthard said. "When I travel, I don't bring a lot of watches; I just bring one that can be worn on any occassion, either casually or smartly. I wanted my signature watch to be that kind of watch."

TW Steel is a fairly new watch brand from Netherlands, having started out with a simple four-model collection in 2005. Since then, the brand has been associated with motorsports with its sponsorship of World Touring Car Championship and Dakar drivers--and twin brothers--Dutchmen Tom and Tim Coronel, respectively. TW Steel also sponsored the now-defunct A1 Grand Prix and counts established race car drivers Dario Franchitti and Emerson Fittipaldi as its ambassadors.

"TW Steel is a fun and exciting brand," said Stuart Morrison, TW Steel's public relations and communications manager. "So when we came into Formula 1, with its millions of viewers in every race, the only person we could think of who could best represent the brand and the sport is David."

The David Coulthard Special Edition is available in 44mm and 48mm case sizes. A polished finish on the side of the bezel, the push-buttons and the mid-piece crown serves as an accent to the sandblasted steel case and the PVD dark titanium plated bezel that has also been sandblasted. The grey dial features Coulthard's name and is offset by the red numbering on the chronograph and tachymeter and a similarly colored chronograph secondhand. It measures time accurately to a 1/20th of a second with its Miyota 0S24 chronograph movement. Functional as it is stylish, the Special Edition watch also features a sapphire crystal, comes with a grey leather Italian strap and is water resistant to 10ATM.

The Philippine launch of the David Coulthard Special Edition watch also served as the introductory model for the local launch of TW Steel's CEO Tech Collection.

The TW Steel David Coulthard Special Edition watch is available at the Podium Mall's TW Steel Boutique, the very first of its kind in the world, for P44,000. TW Steel is exclusively distributed in the Philippines by the Lucerne Group of Companies.

Where can you get the best after-sales service in the Philippines?
View other articles about:
Read the Story →
This article originally appeared on Topgear.com. Minor edits have been made by the TopGear.com.ph editors.
Share:
Retake this Poll
Quiz Results
Share:
Take this Quiz Again
TGP Rating:
/20