10 Pinoys to compete in regional finals in Singapore
by Anna Barbara L. Lorenzo | Sep 20, 2010
CAR BRANDS IN THIS ARTICLE 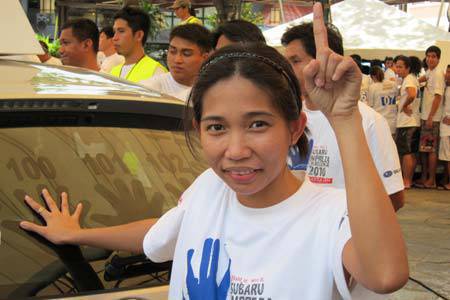 Motor Image Pilipinas declared Apple Joy Lee Balibado as the champion in the Subaru Impreza Challenge – Manila Leg for the second consecutive year as she outlasted 94 other contestants in the competition last weekend.

The 29-year old hardly looked like she's exhausted and when asked how she was feeling after the grueling competition, she merely said, "Okay lang." She did say she'll hit the bed for some well-deserved sleep the moment she gets home.

Balibado will lead nine other Filipinos (see list below) who will represent the country in the upcoming Subaru Impreza Challenge in Singapore. Last year, she managed a 57-hour record to be the last Filipino contestant standing during the regional finals.

The petite contender admits that Singaporeans are really good when it comes to the Subaru Impreza Challenge. The 2009 champion, 40-year old Singaporean Mohamed Anuar, clocked in 77 hours and 43 minutes. George Lee, also from Singapore, holds the all-time record of 81 hours and 32 minutes.

Balibado said she will conduct research on how to outlast other contenders during the regional finals next month.

Check out photos of the events here:

Family of victims in Toyota crash that prompted recall accepts settlement
View other articles about:
Recommended Videos
Read the Story →
This article originally appeared on Topgear.com. Minor edits have been made by the TopGear.com.ph editors.
Share:
Retake this Poll
Quiz Results
Share:
Take this Quiz Again
TGP Rating:
/20