Not right now, at least
by Patrick Everett Tadeo | Jul 19, 2012
CAR MODELS IN THIS ARTICLE 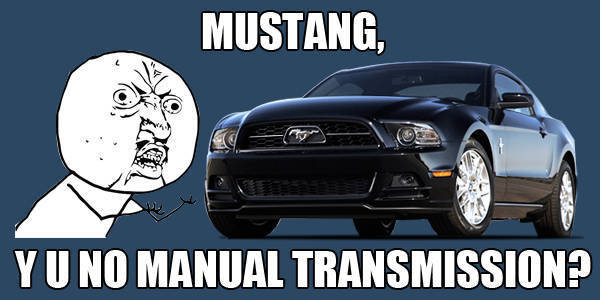 If you've read the Chief's story on the Ford Mustang's launch in the Philippines yesterday, you already know that it's only available with a six-speed SelectShift automatic transmission.

As expected, concerns were raised about how such an iconic muscle (or pony) car could be saddled with a heavier, non-performance-oriented slushbox--how it robs the driver of the purest of motoring pleasures, which comes with timing your gear change precisely with your footwork between the clutch and accelerator pedals.

We asked Anika Salceda-Wycoco, Ford Group Philippines' assistant vice president for communications, if a manual transmission-equipped Mustang will ever find its way here.

"Right now, we will have these two variants only," Salceda-Wycoco responded, referring to the 3.2-liter V6 Premium and the 5.0-liter GT Premium, both of which are equipped with the aforementioned six-speed automatic gearbox. Reading between the lines, we can assume that a manual transmission may find its way here eventually.

Salceda-Wycoco stressed that the SelectShift automatic transmission gives the driver virtually the same kind of control a manual transmission offers, allowing the driver to hold a gear right up to the redline if he so desires.

We can only surmise that with the Mustang being an iconic nameplate that dates back to the 1960s and having a P2.5- to P2.9-million price tag, its market caters to those who can not only afford the car but also appreciate its place in history after having grown up with it. In short, it's for the elderly millionaire gentlemen who grew up dreaming about the first-generation Mustang--whose styling greatly influenced the design of the current model--yet might find the six-speed manual transmission a wearisome chore on our crowded streets.

But maybe, just maybe, if there's a demand for it, a manual-transmission Mustang just might make it here soon. After all, that's how FGP and its dealers managed to eventually bring the Mustang to our shores.

Check out the all-new Mazda BT-50 pickup truck
View other articles about:
Read the Story →
This article originally appeared on Topgear.com. Minor edits have been made by the TopGear.com.ph editors.
Share:
Retake this Poll
Quiz Results
Share:
Take this Quiz Again
TGP Rating:
/20