Honda marks milestone with City sales in the Philippines

Honda Cars Philippines recently sold its 20,000th unit of the City, a milestone for the third-generation subcompact sedan.

"We are proud to share that the City has consistently generated sales milestones for Honda," said Tatsuya Natsume, Honda Cars Philippines president and general manager.

Natsume recalled that prior to the launch of the new Honda City, sales of the subcompact car in the Philippines were reaching approximately 3,400 units per year.

"With the entry of the third-generation City, annual sales on its launch year soared to 8,882 units. Such record was even surpassed on its second year with 8,914 units in 2010," Honda's top executive said.

Honda's 20,000th City was bought by Gilbert Grafia, who was represented by his wife and children in a special ceremony held at Honda Cars Fairview. The Honda City 1.5 E in Crystal Black color is the Grafia family's first car.

"My husband monitored car reviews from the internet and was impressed by the positive feedback on the actual performance of the City," Grace Grafia said. "We had gone to several family trips as soon as the car was released. I'd say the City has performed beyond our expectations. We love how it looks and how comfortable the ride is."

"Honda would like to thank the family of Mr. Gilbert Grafia for being our 20,000th City customer," Natsume said. "We are truly grateful for the tremendous support that the market has given us. They inspire us in continuously looking for ways to bring more joy and value to our products and services." 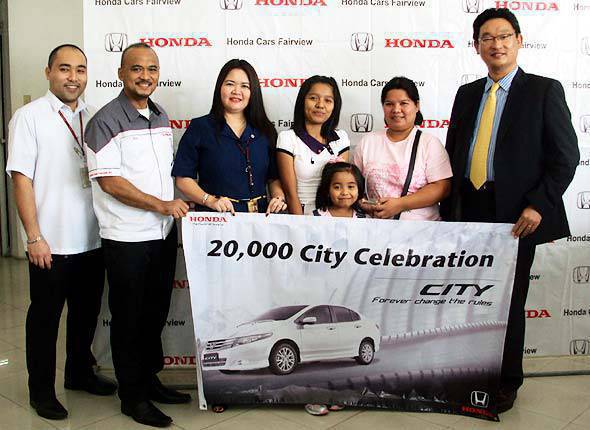 To know more about the Honda City, check out our Buyers' Guide