2013 Subaru Challenge regional final in Singapore: By the numbers

Get to know the contest rules further
by Tracy Carpena | Oct 27, 2013
CAR BRANDS IN THIS ARTICLE 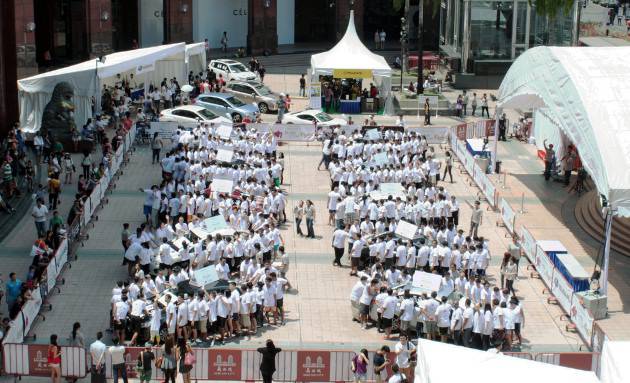 The 2013 Subaru Challenge: The Asian Face-Off kicked off yesterday at Ngee Ann City in Singapore. The Philippine contingent--featuring the seven Manila winners, the Cebu leg winner, the Pampanga leg winner and the Davao leg winner—will try to outlast the other 390 participants from Asia. Here is a rundown of the figures relevant to the annual endurance contest:

12: the number of years the Subaru Challenge has been staged. For this milestone, the organizers--MediaCorp Pte Ltd and Motor Image Group--will give away prizes to contestants holding onto the cars for every 12 hours. Special prizes include lifestyle vouchers, Osim uAngel massage cushion, GPS navigation system and Samsung Galaxy Tab 3.0.

10: the number of Asian countries represented. Singapore has 310 contestants, while Cambodia, China, Hong Kong, Indonesia, Malaysia, Taiwan, Thailand, Vietnam and the Philippines have 10 representatives each. There will also be 10 cars at the contest; each car has 40 participants placing their palms on pre-drawn, designated hand stickers.

81: the competition's longest winning record time in hours. Held by 2008 champ George Lee, 81 hours and 32 minutes is the official winning time of the Singaporean.

* doing physical violence such as punching and slapping or any sort of unruly behaviour (toward a marshal or fellow participant, we suppose);

* relieving themselves in their clothes (urinating) during the challenge;

* taking their palms off the designated decals.

Once a contestant is caught doing any of these, he or she is immediately disqualified.

28.3: the average age of the Philippine contingent. Our youngest representative is Albert Saguillo, the 20-year-old working student and hotel employee from Davao. The 34-year-old serviceman, Juan Furiscal Jr., is our oldest bet.

4: the number of times the most veteran contestant of the Philippines has joined the contest prior to the 2013 edition. Alex Neblasca, four-time finalist of the endurance challenge, also competed in 2008, 2010, 2011 and 2012. He won the titles of country winner and regional winner in 2011, and country winner in 2012. Will he win the car this time?

3: the other special prizes of the contest:

* Country Winner - This is awarded to the last standing representative of each country; it comes with a cash prize of SGD1,000 (around P34,000);

* Country Team Winner - This is awarded to the country team with the longest standing combined time; the winning contingent receives a cash prize of SGD10,000 (P340,000).

1: the number of brand-new car that will be given away after almost four days of grueling competition. Only one winner brings home the key to this car, and the prize varies according to the winner's country of residence:

0: The number of Filipino participants who have emerged victorious in the regional final. For the past 12 years, a Singaporean has always won the most coveted key. Will a Filipino finally win it all this year?

What safety systems is Ford Motor Company developing for the future?
View other articles about:
Read the Story →
This article originally appeared on Topgear.com. Minor edits have been made by the TopGear.com.ph editors.
Share:
Retake this Poll
Quiz Results
Share:
Take this Quiz Again
TGP Rating:
/20