In case you thought he had shifted to Mazda
by Vernon B. Sarne | Nov 25, 2014
CAR BRANDS IN THIS ARTICLE 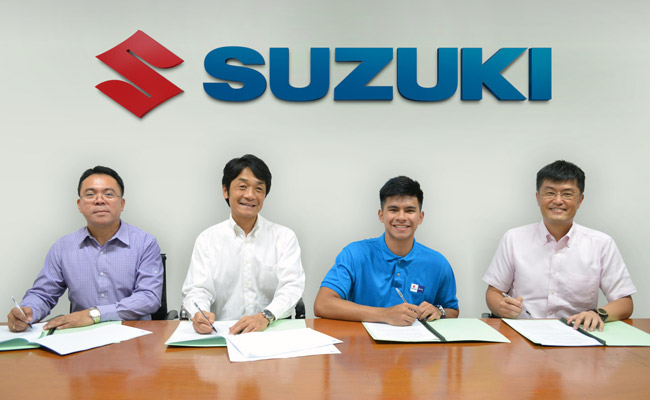 In May last year, UAAP basketball player Kiefer Ravena of the Ateneo de Manila University became the official brand ambassador of Suzuki. Which was a good move on the part of the Japanese carmaker, considering a few of its product offerings in our market are directly aimed at young buyers (Swift, Celerio and Alto).

But then last month, Mazda Philippines awarded Ravena P20,000 in cash for winning the MVP trophy in the recently concluded UAAP tournament. On top of that, Mazda gave the young baller free use of a 3 compact car for four months, a period that will reportedly commence on December 1 and end on March 31 next year. No doubt some people wondered whether Ravena was still an active endorser of Suzuki, because it would be weird seeing a Suzuki ambassador driving around in a Mazda 3.

We can all stop wondering now, because Suzuki Philippines has just announced that Ravena has renewed his endorsement contract with the brand.

"We are very happy to continue being represented by Kiefer Ravena," declared Suzuki Philippines president Hiroshi Suzuki (yes, that's his surname). "His personality and performance on the court best embody what the Suzuki brand is all about--fun, dynamism, reliability and excellence. We look forward to sharing the Suzuki way of life with more customers, especially the younger market, with Kiefer as our endorser."

Our question now is: Who will drive the Mazda 3 that will be lent to Kiefer? His dad perhaps? Or will the basketball star sneak out at night and take the 3 for a secret joyride?

Honda PH has updated the CR-V
View other articles about:
Read the Story →
This article originally appeared on Topgear.com. Minor edits have been made by the TopGear.com.ph editors.
Share:
Retake this Poll
Quiz Results
Share:
Take this Quiz Again
TGP Rating:
/20