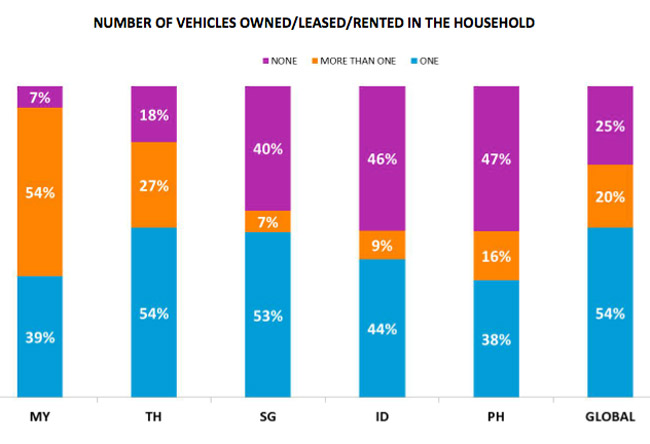 Nearly half of all Filipino households--or 47%, to be exact--are carless, according to the Nielsen Global Survey of Automotive Demand. The study--which was conducted between August 14 and September 6, 2013, and polled more than 30,000 consumers in 60 countries throughout Asia-Pacific, Europe, Latin America, the Middle East, Africa and North America--indicated that the ratio of car ownership in the Philippines is currently the fifth-lowest in the world (the study didn't mention the four countries that ranked lower).

The study also found that 38% of Filipino households have one car, and some 16% have more than one car.

By comparison, one of our ASEAN neighbors, Malaysia, only has 7% of its households not having a motor vehicle. Its 93% car ownership rate among households--39% with one car and 54% with more than one car--is, in fact, the third-highest in the world.

In Thailand, meanwhile, only 18% of all households do not have a car. Fifty-four percent have one car and 27% have more than one car.

In Singapore, a huge 40% of all households are carless, but that's only because of the prohibitive costs of car ownership (which requires, among other things, a certificate of entitlement). Fifty-three percent have one car and 7% have more than one car.

In Indonesia, 46% of all households are without a motor vehicle. Forty-four percent have one car and 9% have more than one car.

"Automotive demand in the Philippines has been relatively low, and for many households owning a car has been financially out of reach," said Nielsen Philippines managing director Stuart Jamieson. "We, however, expect a more robust automotive demand in the coming years as more households join the middle class and reach the financial means to make their first car purchase."

Other findings in the study?

* Current car owners in the Philippines display the highest level of intention to upgrade globally. More than nine in 10 Filipino car owners (96%) intend to upgrade their vehicle when they are financially able (versus 95% in Indonesia, 93% in Malaysia, 89% in Thailand, 87% in Singapore, and 89% globally).

* In terms of how they view their cars, Filipino car owners are almost as pragmatic as their Singaporean counterparts. Eighty-eight percent of Singaporeans view their car as a tool to get them where they are going, followed by Filipinos (87%), Indonesians and Malaysians (85%), and Thais (82%).

* Many Southeast Asian car owners also believe their car is an important symbol of the success they have achieved in life, and the Philippine market along with two other Southeast Asian markets ranked in the top 10 countries globally when it came to viewing their car as a status symbol. Seventy-nine percent of Thai car owners ranked second-highest globally in viewing their car as a status symbol, followed by Filipinos (72%, fifth-highest globally), Indonesia (67%, 10th-highest globally), Malaysia (62%) and Singapore (54%). This compared with 52% of consumers globally.

"Consumers, particularly emerging middle-class consumers, are not only in a better position to buy the things they want and need, they are also looking to make purchases that demonstrate their improving social status," Jamieson pointed out. "For many of these consumers, car ownership is the ultimate symbol of the success they have achieved." 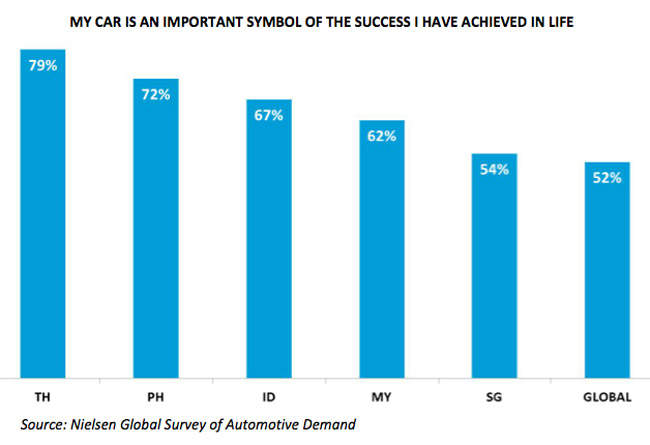 Volvo expands plant to increase production to 300,000 cars a year
View other articles about:
Recommended Videos
Read the Story →
This article originally appeared on Topgear.com. Minor edits have been made by the TopGear.com.ph editors.
Share:
Retake this Poll
Quiz Results
Share:
Take this Quiz Again
TGP Rating:
/20