Will we ever see the BMW i3 urban electric car on our city streets? 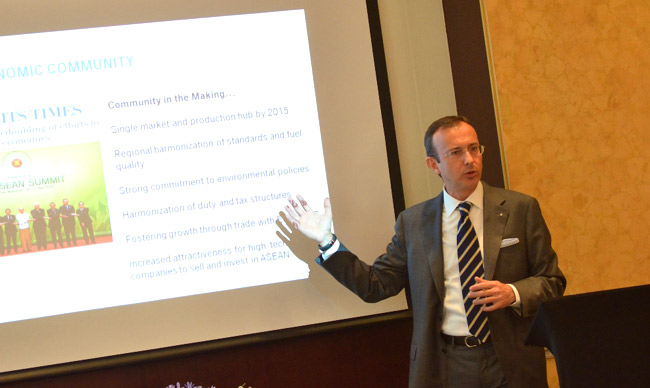 In accordance with BMW Group's plans, the all-electric BMW i3 will only be available in four countries in Asia. Out of the 30 countries that will have the electric car, only Singapore, Korea, China and Japan will get it in the Asian market. This was shared by BMW Asia president Sergio Solero at the BMW Group's "Mobility of the Future" press conference last Wednesday.

"But that doesn't mean that the i3 is not coming to the Philippines," said Solero. "Bringing it in the Philippines is not yet in the plans, but we are considering it."

The executive cited Norway as an example. The German carmaker initially did not plan to enter the electric city car in the aforementioned European market. But because of the Norwegian government's reception and support for the infrastructure necessary to make the i3 viable, the all-electric car has now been roaming the streets of Norway.

BMW sees a bright future for the Asian market, and considers the Philippines as "one of the shining stars" in the region. The company believes electrical mobility will come--but it will take time, Solero said.

Before introducing the i3 to the Philippine market, local BMW distributor Asian Carmakers Corporation must first tick off certain items on the checklist. For one, the right infrastructure should be in place. Thus, government support is also necessary.

The carmaker intends to enrich the i3 driving experience with available apps. The i Remote app--available on iOS and Android devices--informs owners of the car's battery condition and charge level, and displays the car's real-time range, service messages and location. The app also provides information on the available charging stations along the route that the driver will take.

From the carmaker's end, aftersales service should be available to make sure i3 ownership and maintenance would not be a pain.

The BMW i3 comes with an eight-year/100,000km battery warranty. One full charge enables the car to travel 130-160km. Last year, associate online editor Dinzo Tabamo saw the electric car up close and reported that the i3 has a range extender that increases the car's mileage to 360km. (Read: We meet the electric BMW i3 up close.)