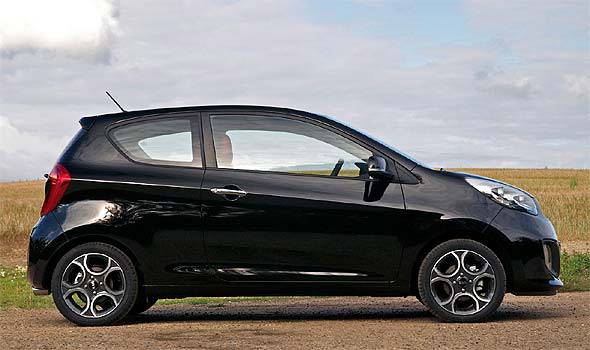 Kia Motors is making company history in Europe by introducing the three-door version of the Picanto, which is scheduled to go on sale in September.

According to the Korean carmaker, the three-door Picanto and its five-door brother "are identical to ensure they enjoy the same levels of interior space and crash safety." Kia said, however, that the company's design team made sure the three-door gets its own distinct characteristics.

Here are some of the differences between the five- and three-door Picanto:

The changes are most obvious in profile, where new doors, rear panels and glass aft of the A-pillar give the three-door Picanto a fresh, dynamic appearance, accentuated by the rising belt line that slices through the door handle on each side, and the aerodynamically shaped side sill mouldings. Unique alloy wheels on the upper two trim versions are other distinguishing features of the three-door Picanto.

At the front and rear the three-door Picanto reveals its own personality, too. The main grille opening is larger than that on the five-door and is available with silver or red trim surrounds. The front bumper has been re-profiled to make the car appear wider and lower. It contains a slim, full-width lower grille, housing large black-bezelled foglamps with the two upper trim grades.

The rear bumper has a rectangular black central section in place of body colour, a relatively simple measure that makes the three-door Picanto instantly appear sportier. The finishing touch is created by exposed twin chromed exhaust outlets in place of the hidden single tailpipe of the five-door car.

Being the sportier version of the Picanto lineup, the three-door city car has its own color schemes and trim structure. The Picanto 1 and Picanto 1 Air (with air-conditioning system) come in an all-black ensemble, while the Picanto Halo comes with a premium black and grey interior trim. The top-of-the-line variant, the Picanto Equinox, has a premium 'Chilli' red finish. The variants also differ in the features offered by each car.

The new three-door Picanto is powered by Kia's brand-new 1.0- and 1.25-liter Kappa family gasoline engines. The 1.0-liter powerplant delivers 68hp and 95Nm of torque, while the 1.25-liter engine offers 84hp and 121Nm of torque.

Kia is optimistic about the new three-door Picanto's sales in the market, with the global forecast for the city car pegged at around 2.4 million by 2014 and 3.3 million by 2015. With the rising costs of owning a car, as much as a million of the projected buyers are expected to get the three-door variant. Do you think the Philippine market will make a dent in Picanto sales if and when Columbian Autocar Corporation, the official distributor of Kia vehicles here, decides to bring in the three-door Picanto?

PNP to put up 'police corner' in Shell stations nationwide
View other articles about:
Read the Story →
This article originally appeared on Topgear.com. Minor edits have been made by the TopGear.com.ph editors.
Share:
Retake this Poll
Quiz Results
Share:
Take this Quiz Again
TGP Rating:
/20