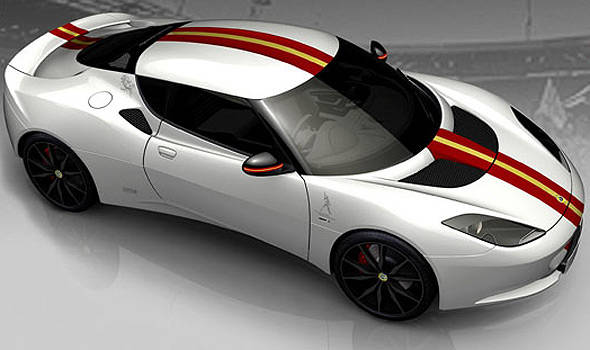 If rock band Queen's legendary singer Freddie Mercury were still alive, he would have celebrated his 65th birthday on September 5. To mark the occasion and to help raise money for the Mercury Phoenix Trust, the HIV/AIDS charity set-up in his honor by band mates Brian May, Roger Taylor and Queen manager Jim Beach after Mercury's death in 1991, Lotus has commissioned a one-off Evora S.

"We were only too happy to contribute to this fantastic cause," said Group Lotus' corporate operations director Gino Rosato. "We have created something very special to raise money for Mercury Phoenix Trust and we hope the car goes to a collector who really enjoys it."

Drawing inspiration from Mercury, the Lotus Design team gave the Evora S a white exterior with a prominent red and gold stripe running right down the middle of the car, evoking the singer's iconic costume for Queen's 1986 "Magic" tour. The front fender references the Montreux Freddie memorial statue with the line "Lover of life. Singer of songs" taken from the statue's inscription.

Inside, the one-off yellow interior, also inspired by the 1986 stage costume, includes a union flag on the back of the seats while the incorporation of a crown on the headrest hints at Freddie's playful royal role-playing. Lotus added that this one-off Evora S's sound system"or more specifically the RADIO, will send the lucky owner GA GA."

"Our friends at Lotus have donated a stunning Evora S for our auction, which I know will be a massive fund-raiser for the Mercury Phoenix Trust," said May. "We cannot thank them enough for their generous support on what is a very special occasion for everyone who knew and loved Freddie."

Though the Mercury Phoenix Trust has yet to post how much the Evora S went for in the auction, it's worth noting that another item it auctioned off was "a money can't buy prize of a Top Gear driving lap with the Stig."