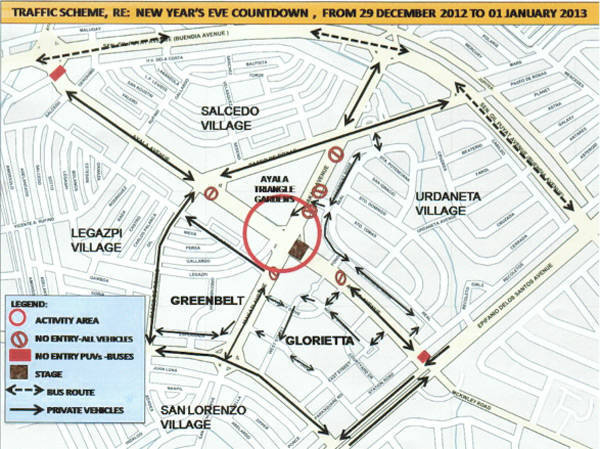 With the first day of 2013 being less than a week away, the city government of Makati has released details of its traffic rerouting scheme days before it takes effect in time for the traditional New Year's Eve countdown, which will be held at the intersection of Ayala and Makati Avenue on December 31.

As early as 12:01am on December 29, both directions of Ayala Avenue (from Paseo de Roxas to Parkway Drive) and Makati Avenue (from Dela Rosa Street to Paseo de Roxas) will be closed to vehicular traffic to make way for the construction of the stage and the placing of the necessary equipment and fireworks paraphernalia.

As such, passenger buses from EDSA and those going toward South Superhighway or Pasay City (and vice versa) are advised to take Sen. Gil Puyat Avenue.

Vehicles along Makati Avenue from Sen. Gil Puyat Avenue and those going toward Ayala Center or EDSA are advised to turn right on Paseo de Roxas, proceed ahead and take a left either on Esparanza Street or Arnaiz Avenue to reach their destination. Private vehicles from the Glorietta area going toward Sen. Gil Puyat Avenue are advised to turn right from Parkway Drive to the opposite lane of Makati Avenue, turn right on Dela Rosa Street, another right on Paseo de Roxas, and then left on Ayala Avenue to reach their destination.

As for vehicles going to and from Tower One and Exchange Plaza, they are advised to take the Paseo de Roxas entrance and exit, while those going to the Makati Stock Exchange are to take Apartment Ridge, turn left on Santo Tomas Street, and then left on Makati Avenue.

If this route concerns you, good luck! And happy New Year, too!

BMW reveals new M6 Gran Coupe model; to go on sale in May 2013
View other articles about:
Recommended Videos
Read the Story →
This article originally appeared on Topgear.com. Minor edits have been made by the TopGear.com.ph editors.
Share:
Retake this Poll
Quiz Results
Share:
Take this Quiz Again
TGP Rating:
/20