Mercedes-Benz is celebrating the 45th anniversary of its AMG tuning arm by producing a special "45th Anniversary" edition of the SLS AMG GT3 race car and limiting its production to "no more than five vehicles."

To make it stand out from the "regular" SLS AMG GT3, a number of exterior and interior modifications have been carried out on the limited-edition model.

The car's body is clad in designo magno graphite matte paint, while the light-alloy wheels are done in designo magno graphite "to complement the body's matte paintwork to perfection." The car also sports a "45 Years of Driving Performance" logo framed in silver on the GT3's gull-wing doors, while its doors, hood, mudguards, trunk lid, rear wings, front and rear aprons, front splitter and rear diffuser are produced in carbon-fiber reinforced plastic.

Since the "45th Anniversary" model is based on the GT3 race car, it comes with a steel roll-over cage that has the same matte designo magno graphite finish as the exterior. While the car's dashboard and center console sport a matte carbon-fiber finish, the six-point seat belts and steering wheel "spider" are done in silver and serve as contrasts to the car's largely matte theme.

Also present in the special-edition SLS AMG GT3's high-strength, carbon-fiber safety cell is a seat shell on the co-driver's side. And to perhaps remind the car's occupants of its pedigree, a special badge with a "1 of 5" logo is present on the seats and center console. Rounding out the kit included in the car's appointments is a high-quality AMG indoor car cover that bears a "45 Years of Driving Performance" logo.

Of course, the most special part of any AMG vehicle is the hand-assembled engine. For the "45th Anniversary" SLS AMG GT3, five-time DTM champion and Mercedes-AMG brand ambassador Bernd Schneider assisted an AMG engine fitter in installing the naturally aspirated AMG 6.3-liter V8 engine that, as per AMG's tradition, displays their signatures on the special AMG engine badge.

Schneider's involvement in the car doesn't end there. Customers who acquire one of the SLS AMG GT3 "45th Anniversary" units will also receive an exclusive vehicle certificate signed by Schneider. Since the handover of the car will take place at Mercedes-AMG in Affalterbach, an in-depth introduction to the operation of the vehicle and its engineering and technology will be provided by Schneider himself. A visit to the AMG engine "Manufaktur" section where Schneider and the AMG engine fitter assembled the 6.3-liter V8 engine by hand is also included in the program. 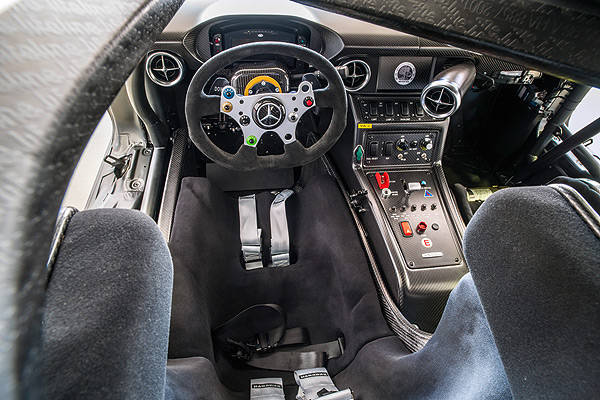 Toyota 86 chief engineer says there are 2 more sports cars coming
View other articles about:
Read the Story →
This article originally appeared on Topgear.com. Minor edits have been made by the TopGear.com.ph editors.
Share:
Retake this Poll
Quiz Results
Share:
Take this Quiz Again
TGP Rating:
/20