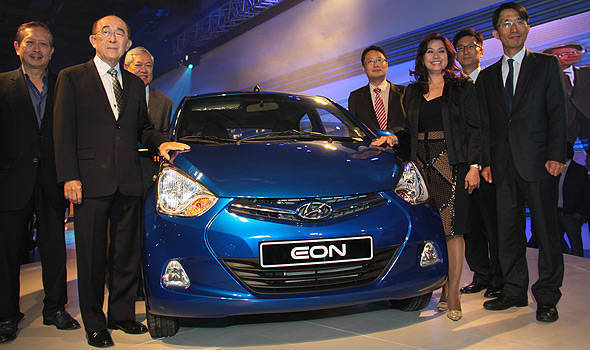 Hyundai Asia Resources (HARI), the official distributor of Hyundai vehicles in the Philippines, is launching two brand-new vehicles at the 2012 Manila International Auto Show, the first of which is the Eon subcompact hatchback you see here.

Manufactured in India, the Eon bears the same fluidic-design language as its stablemates, evident in the prominently flowing character lines, particularly the one that originates from the upper corner of the car's headlight and flows down and up across the doors before terminating at the upper corner of the taillights. Up front, the car's face is dominated by Hyundai's distinct hexagonal grille while the half-moon shaped tail lights and subtle rear spoiler highlight its rear.

Powering the five-door hatchback is a frugal 0.8-liter Epsilon multi-point injection engine that puts out 55hp and 75Nm of torque. Mated to a five-speed manual transmission, Hyundai claims that the Eon, "delivers best-in-class fuel-efficiency of 26.3 km/L during long drive based on a fuel economy test" conducted by the Korean carmaker.

The Eon's ride promises to be stable, thanks to its front MacPherson strut-type suspension mated to a newly-designed compact front sub-frame to help reduce weight and provide an improved caster angle for more precise handling and comfortable ride. Body roll is also significantly reduced by mounting the stabilizer directly on the strut. With a minimum turning radius of 4.55 meters, maneuvering around tight spaces is not an issue with the Eon.

Though the Eon serves as an entry-level car for Hyundai, it comes equipped with features like front power windows, keyless entry, a driver's side airbag, an impressive cockpit with welcoming lights on its center cluster display and an audio-entertainment system that has a USB slot or auxiliary input.

Despite its size, the Eon has plenty of cubbyholes and other compartments like the dashboard storage, an open storage tray at the center fascia, cupholders, floor console, door map pockets, and seat back pocket on the front passenger seat for handy items and other gadgets.

The Eon has a cargo capacity of up to 215 liters with its rear seats capable of being folded for irregularly shaped items or much larger items.

Two variants of the Eon are available, with the entry-level model going for P438,000 while the range-topping one with the body-colored bumpers is at P498,000.

8 things you can expect at MIAS 2012
View other articles about:
Read the Story →
This article originally appeared on Topgear.com. Minor edits have been made by the TopGear.com.ph editors.
Share:
Retake this Poll
Quiz Results
Share:
Take this Quiz Again
TGP Rating:
/20