You can't have too many exclusive-variant Minis
Jan 30, 2012
CAR BRANDS IN THIS ARTICLE 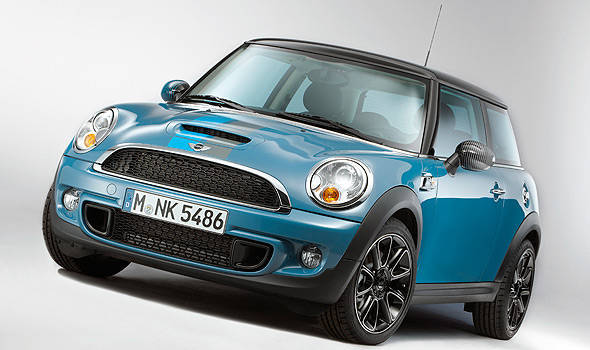 Despite now being owned by the Germans, Mini is honoring its English origins by offering for a limited time two special-edition models that honor London, its original home and the capital of the United Kingdom.

First is the Mini Baker Street, which pays tribute to Sherlock Holmes, the fictional detective created by Arthur Conan Doyle who, in the novels, lives at 221B Baker Street.

Finished in exclusive Rooftop Gray metallic paint--although it's also available in either Pepper White or Midnight Black--and sporting twin black bonnet stripes, the Mini Baker Street is available in One, One D, Cooper and Cooper D guises. Making this special-edition model stand out is the 'Baker Street' lettering added to the side scuttles and door sills as well as the 16-inch 'Six-Star' twin-spoke light alloy wheels finished in high-gloss black to match the door mirror caps. Cooper and Cooper D models also feature a painted black roof.

Inside is a fresh interpretation of the cloth and leather seats available on the standard Mini hatch, with the diamond-patterned design in Cross Check Rooftop Gray also used on surfaces around the cockpit and door trim. Serving as a highlight are the contrasting light gray stitching that appears on the floor mats; gear stick; and handbrake boot.

The second special-edition model is the Mini Bayswater and is named after one of London's most cosmopolitan areas adjacent to popular hotspots Knightsbridge and Notting Hill.

Available in Cooper, Cooper D, Cooper S and Cooper SD versions, this special-edition Mini is clad in Kite Blue metallic paint that has been created especially for this model, with Midnight Black metallic and Eclipse Gray metallic available as alternative body colors on the Cooper S and Cooper SD variants. Acting as its highlight is the hood finished with blue and gray Sport Stripes, which corresponds to the door mirror caps also being colored the same way. 'Bayswater' lettering on the side indicator surrounds and door sills and 17-inch light alloy 'Sandblast' wheels with a high-gloss black finish, machined rim and spoke edges, complete the exterior package.

Inside, the Mini Bayswater comes with Punch Leather seats finished in Rocklike Anthracite with side bolsters that sport blue and gray contrasting stitching and 'Bayswater' seat tags. Other features that extend the car's exterior design to the interior are the Piano Black cockpit finish that continues the color scheme of the Sport Stripes on the hood, and the floor mats that have anthracite-colored edging with blue contrasting stitching.

The Mini Baker Street and Bayswater special-edition models are due to go on sale on March for a limited period and will be available in all 100 global markets where the brand is sold.

Toyota after Le Mans crown again as it shows off 2012 challenger
View other articles about:
Read the Story →
This article originally appeared on Topgear.com. Minor edits have been made by the TopGear.com.ph editors.
Share:
Retake this Poll
Quiz Results
Share:
Take this Quiz Again
TGP Rating:
/20