Will it help reduce accidents?
by Patrick Everett Tadeo | Oct 11, 2011 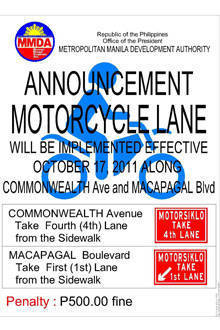 The Metropolitan Manila Development Authority (MMDA) will implement the strict use of motorcycles lanes on Commonwealth Avenue in Quezon City and Macapagal Avenue in Pasay City starting October 17.

In preparation of this measure, the MMDA has established  road signs while the agency's traffic personnel will distribute flyers to motorcycle riders that traverse the two thoroughfares. The agency, though, will do a dry run from October 17 to 23 before it strictly implements the use of the motorcycle lanes starting October 24.

"What we want to accomplish here is to minimize the accidents caused by motorcycle riders that constantly change lanes," said MMDA chairman Francis Tolentino. "We also believe that traffic will flow much faster if motorcycles will stick to their own lane."

For Commonwealth and Macapagal avenues, the designated motorcycle lane will be the fourth and first lane from the sidewalk, respectively. If a motorcycle rider wishes to change lanes to make a U-turn or to turn into a side street, the MMDA will give them an allowance of 100 meters to execute their maneuver.

"The motorcycles lanes are non-exclusive designated lanes, which means light vehicles like cars can use it if there are no motorcycles in sight," Tolentino said. "It is, however, off-limits to heavy vehicles like trucks and buses."

The MMDA also sought the assistance of the Motorcycle Philippines Federation (MCPF), the umbrella group of the country's top motorcycle organizations, federations, associations and clubs, by asking for their input before the agency starts implementing the new rule next week. Though the MCPF agreed with the MMDA's new policies for motorcycle riders, it asked the agency to increase the allowance a motorcycle needs to execute a turn from 100 to 200 meters.

Besides imposing a P500 fine on motorcyclists who don't use motorcycle lanes, the agency will also be looking out for other violations that two-wheeled riders often commit like not turning on the headlight or the running light even during daytime, not using the turn signal when making a turn, wearing slippers or sandals while operating a motorcycle, and not using a proper motorcycle helmet--or securely strapping it if they have one--on their head. Reckless motorcycle riders might even see their motorcycle being confiscated and impounded if they are caught in the act.

To educate motorcycle riders on the dos and don'ts of operating their vehicle, the MMDA with the help of the MCPF will conduct a 15-minute on-the-spot seminar for apprehended violators during the first week.

If the motorcycle lanes prove to be successful, the MMDA plans to implement them on EDSA, C5 and Roxas Boulevard in the near future.

Lexus LFA arrives in the Philippines
View other articles about:
Recommended Videos
Read the Story →
This article originally appeared on Topgear.com. Minor edits have been made by the TopGear.com.ph editors.
Share:
Retake this Poll
Quiz Results
Share:
Take this Quiz Again
TGP Rating:
/20