by Patrick Everett Tadeo | May 29, 2009
If you received our newsletter, you'd know what happened to James Dean and his Porsche 550 Spyder, Rowan Atkinson and his McLaren F1, and Lindsay Lohan and her Mercedes-Benz SL 65.

Here's an addendum to our list of celebrity crashes:

Lisa ‘Left Eye' Lopes in a Mitsubishi Pajero. Lopes was part of the popular all-female R&B group, TLC. When professional jealousy threatened to tear the group apart, Lopes busied herself by launching a solo career. However, this was short-lived (no pun intended) when, on April 25, 2002, the Mitsubishi Pajero she was renting while on vacation in Honduras struck two trees and rolled several times, throwing Lopes and three other occupants out the window. Based on the police report, Lopes tried to overtake a truck ahead of her, only to find another truck headed towards her on the opposite lane. She swerved off-road to avoid a collision. Lopes was the lone fatality in a vehicle that carried ten people when the accident happened.

Eddie Griffin in a Ferrari Enzo. Only 400 Ferrari Enzos were ever built. Sadly, comedian Eddie Griffin is one of the few people to bring the Enzo closer to extinction by managing to total one such example. Griffin was reportedly practicing for a charity racing event to promote his movie, Redline. Apparently, Griffin lost control of the supercar which then slammed nose-first on to a wall. The $1.2-million Enzo wasn't even Griffin's - it belonged to the movie's producer, Daniel Sadek. And when you consider the fact that the film had a budget of $26 million and yet only grossed $6.8 million in North America, you don't know if you'd feel sorry for the producer, for the Enzo, or for both.

Naseem Hamed in his McLaren-Mercedes SLR. Before Ricky Hatton, the British had Naseem Hamed. Known for his flashy style, it wasn't surprising that Hamed owned an equally flashy silver McLaren-Mercedes SLR. Hamed crashed head-on to a Volkswagen Golf at almost 150 kph before hitting the Ford Mondeo the boxer was trying to overtake. The driver of the Golf was so seriously injured, every major bone in his body was reportedly broken. Hamed, meanwhile, was unhurt but he was sent to jail for 15 months after entering a guilty plea.

Cristiano Ronaldo in his Ferrari 599. The Portuguese footballer and Manchester United winger wrote off his Ferrari 599 when he lost control of it while speeding through a tunnel near Manchester Airport. The Ferrari hit the tunnel wall with such intense force, debris was sent flying to the other lane, with a wheel reportedly lying 600 feet from where the car came to rest. Surprisingly, both the footballer and his well-tousled hair were unscathed. This was among the many incidents involving professional footballers getting involved in vehicular accidents that prompted the Professional Footballers Association to now offer extra driving lessons to its members.

Morgan Freeman in a Nissan Maxima. Part of ‘The Dark Knight' curse or mere coincidence? Morgan Freeman was visited by bad luck a few months after Heath Ledger's death and shortly after Christian Bale's arrest before the film's London premiere. Driving a friend's Nissan Maxima near his home in Mississippi, Freeman reportedly dozed off behind the wheel. Without anyone properly controlling the car, it went off the highway, flipped several times, and ended in a ditch. The car was so badly damaged, both Freeman and his friend had to be extricated from the vehicle using the Jaws of Life hydraulic rescue tools.

Shia LaBeouf in his Ford F-150. Hollywood's current ‘Golden Boy,' Shia LaBeouf, must have been wishing for a "Transformer" when his Ford F-150 flipped after getting hit by another car while reportedly trying to turn at an an intersection. Based on a police report, LaBeouf was allegedly intoxicated, prompting them to arrest him in the scene of the accident. Two days later, the actor was cleared of all charges when it was discovered that the driver of the other vehicle was beating the red light when the accident happened.

Orlando Bloom in a Toyota Matrix. Orlando Bloom's car crash is additional proof that sometimes, being blessed with good looks can really be a curse. Bloom had just left a nightclub in Los Angeles with two women in a borrowed Toyota Matrix when the paparazzi started chasing him. Eager to get a photo of him with two unidentified women in the car, the paparazzi suddenly cut through the lane Bloom was on. Instinctively, Bloom swerved to avoid hitting the paparazzo's car, only to find himself rear-ending a Porsche Cayenne parked on the side of the street. Although Bloom was uninjured, the two women with him weren't so lucky, with the woman in the front passenger seat receiving some cuts and bruises on her face while the one at the back fractured her neck. 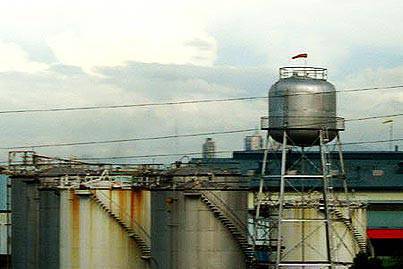 Oil firms to stay in Pandacan depot
View other articles about:
Read the Story →
This article originally appeared on Topgear.com. Minor edits have been made by the TopGear.com.ph editors.
Share:
Retake this Poll
Quiz Results
Share:
Take this Quiz Again
TGP Rating:
/20