How many cars were stolen in PH from January to April 2014? 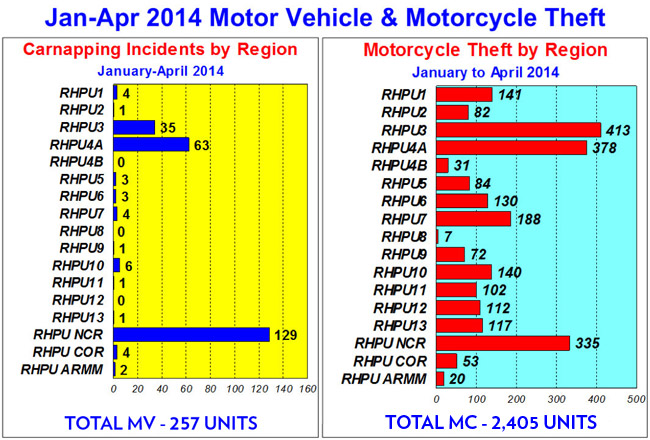 The public information office of the Philippine National Police has released a Highway Patrol Group report detailing the number of motor vehicles and motorcycles reported stolen in the country in the first trimester of the year. According to the report, there were only 257 reported cases of car theft from January to April this year, and 2,405 reports of motorcycle theft.

Of the above figures, the HPG was able to recover 132 motor vehicles (51.4%) and 63 motorcycles (2.6%), according to the report from the office of PNP PIO Director Chief Superintendent Reuben Theodore Sindac. This means one in two stolen cars in the Philippines is still able to be recovered, while stolen motorcycles are practically as good as gone.

Our colleague Ira Panganiban will discuss the HPG's report on his radio program today at Radyo Inquirer 990AM, from 9am to 10:30am.

How do you feel about car security in the country after reading this report?