A lot happened this past week
by TopGear.com.ph | Aug 1, 2021
CAR BRANDS IN THIS ARTICLE

“President Rodrigo Duterte delivered his final State of the Nation Address earlier today. During his speech, he discussed the transport and infrastructure projects that the administration has taken to improve commuting and travel within Metro Manila.

“In his final State of the Nation Address (SONA), President Rodrigo Duterte enumerated the transport- and motoring-related programs for the country’s road users.

“Among the accomplishments mentioned by the Chief Executive are the new bridges, roads, flyovers, and other pieces of infrastructure that have been completed during his term. He likewise mentioned the improvements to Metro Manila’s train lines: the MRT-3, which now has more carriages running at 60kph (from 30kph), and the LRT-2, whose East Extension catering to Marikina and Antipolo residents began operations recently.

“The President also talked about the Land Transportation Office’s (LTO) plan to begin issuing driver’s licenses with 10-year validity. This will kick off within the year.

“While Duterte said he is in favor of this program, he had this to say to the LTO: Motorists seeking to get a 10-year driver’s license must undergo a more stringent physical examination to ensure they are still capable of operating a motor vehicle.

Kia PH to give Hidilyn Diaz a brand-new Stonic

“The rewards just keep on coming for Hidilyn Diaz, and we’re all for it. The latest addition to the Olympic gold medalist’s growing list of incentives is a brand-new Stonic from Kia Philippines.

“Diaz will be receiving no less than the top-of-the-line Stonic 1.4 EX AT, which is priced at P925,000. For those of you who aren’t familiar with the car, it’s a five-seat crossover that was added to Kia’s local lineup just last year. It’s powered by a 1.4-liter gasoline engine capable of 99hp and 132Nm of torque. Actually, if you want to read more on it, you can just check out our full review here.

“Now, if you know the Stonic and its product tagline, then you might agree with us when we say that it’s a fitting reward for a win that’s... iconic. Okay, we’ll see ourselves out.

“All jokes aside, the Ayala Corporation—the company behind Kia Philippines— has been a supporter of Diaz and her team for years now, so this comes as no surprise. Just check out this old post from Diaz’s Instagram account:

“Now, the Ayala Foundation is recognizing Diaz as ‘Atletang Magiting’ after her record-setting run at the 2020 Tokyo Olympics. You can see the company’s official statement below.”

“The perks of winning the Philippines’ first-ever Olympic gold have snowballed for Hidilyn Diaz.

“Phoenix Petroleum is the latest firm to pledge incentives to the 30-year-old weightlifter behind a P5-million financial reward. Atty. Raymond Zorilla, senior vice president for external affairs of Phoenix Petroleum Philippines Inc., made the announcement on behalf of Phoenix Petroleum owner Dennis Uy a day after Diaz made history by copping the country’s very first Olympic gold after topping the women's 55kg event in the Tokyo Games.

“‘Phoenix through Siklab Atleta is giving Hidilyn Diaz P5 million and lifetime free fuel for winning the Olympic gold,’ said Zorilla, who also acts as the Fuel Masters’ board of governor in the PBA.

“Siklab Atleta is the sports foundation established by Uy in 2018. Its main goal is to help the country win its first-ever Olympic gold medal for the next two cycles starting with the Tokyo Games.”

“Enhanced community quarantine (ECQ) in Metro Manila is back, as the government has announced that the capital will be put under the stricter classification from August 6 to 20, 2021. It feels like March 2021 all over again. Or March 2020. Whatever.

“Based on past ECQ guidelines, public transportation will presumably go back to how it was a few months back. Trains will only be allowed to carry up to 30% of their capacities, while public utility buses (PUBs) and jeepneys (PUJs) will be allowed up to 50%. For the full details on the stricter transport guidelines, you can read our previous story here.

“Take note that for now, Metro Manila is still under general community quarantine with heightened restrictions until ECQ takes effect. For more info on which regions will be placed under what type of community quarantine, you can refer to the table below: 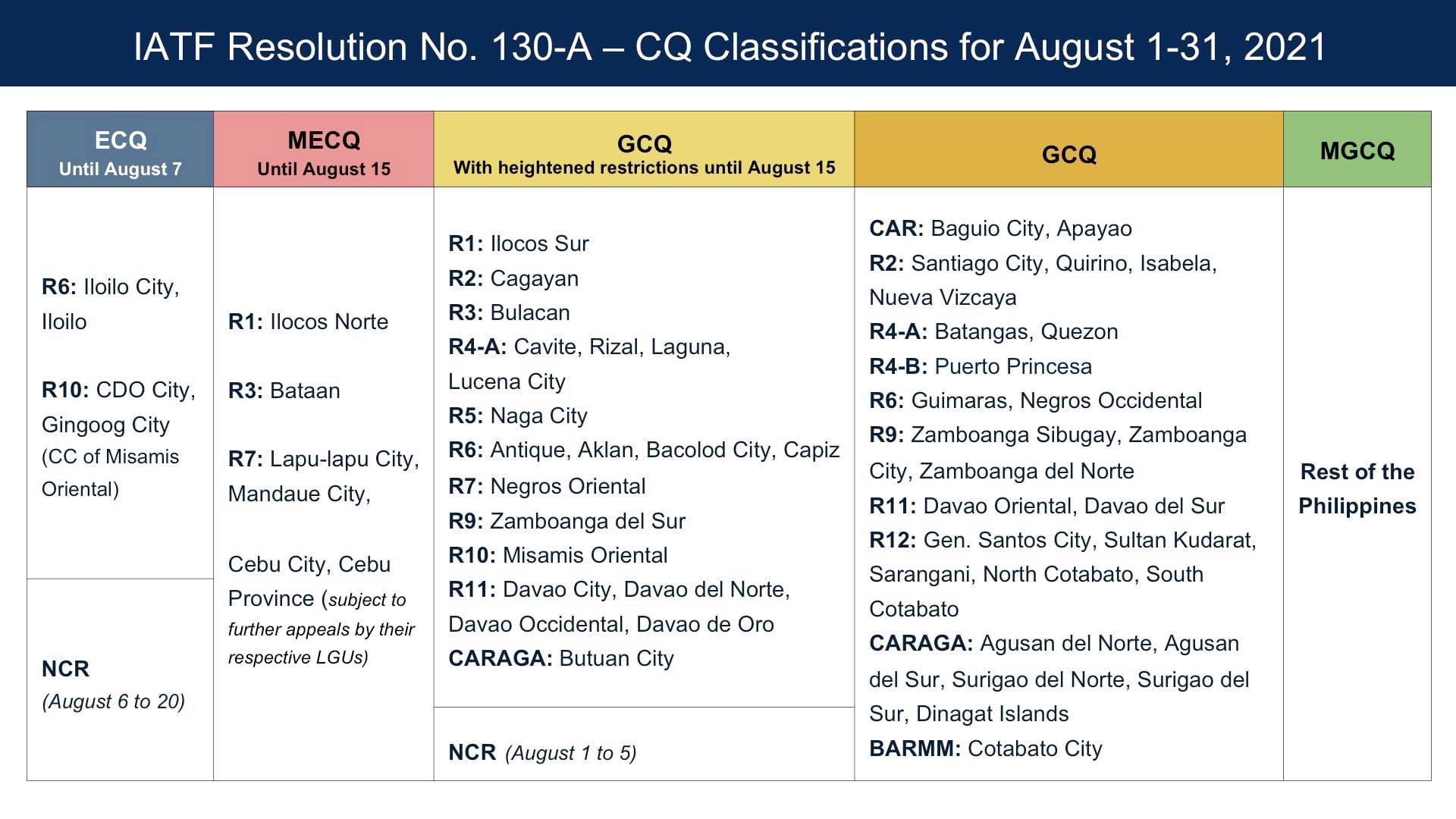 “The Department of Transportation (DOTr) has yet to release the full guidelines on transport, but it has now released an official statement. It reads:

“‘Per Secretary [Arthur] Tugade, the recommendation of DOTr is to retain the current supply and capacity of public transportation.

“‘Restrictions will be applied on passengers,  i.e. stricter enforcement to ensure that only APORs are permitted to use public transport, as mandated by the IATF.

But, whatever the decision of IATF will be, we will abide.’”

“The Department of Public Works and Highways (DPWH) has some very good news for motorists down South: South Luzon Expressway (SLEX) Toll Road 4 (TR4), which will significantly speed up driving to Lucena City, will be open in 2022.

“DPWH head Mark Villar shared the project’s timeline during a recent inspection of the project site in Tiyaong, Quezon, saying the agency expects phase one of SLEX TR4 to be finished within next year.

“‘Kaya balak ko namin tapusin itong first portion hanggang Tiyaong by next year. At least mapapakinabangan na po ang TR4 by next year, aabot na ang expressway network sa Quezon,’ he added, saying motorists can rest assured the DPWH will do everything in its power to stick to this timeline.”

Electric kick scooters are being stopped by MAPA enforcers

“For many, personal mobility devices like electric kick scooters have been a godsend since the COVID-19 pandemic began. Not only does the vehicle provide an alternative to a public transportation system unable to perform at full capacity, it gives people that can’t to afford a car a viable way to get around.

“One would think that a city like Makati would welcome alternative modes of transport like these with open arms, considering the area is packed with offices and businesses. On Tuesday, however, Makati Parking Authority (MAPA) enforcers began apprehending electric kick scooter riders inside the central business district.

“MAPA’s basis? Land Transportation Office (LTO) administrative order 2021-039, which limits the use of electric kick scooters to barangay roads only. At the same time, however, the order permits their use on “bicycle lanes or similar lanes designated by proper authorities” provided the rider is wearing a helmet.

“MAPA’s move was met with backlash from electric kick scooter users and personal mobility advocates online. Petitions were made, and the issue was recently escalated to the Makati Central Estate Association (MACEA)—a local organization composed of Makati City property owners and businesses.

“Now, electric kick scooter riders are still being stopped by MAPA enforcers, but are only being left with a warning. We reached out to Electric Kick Scooter Philippines co-founder Tim Vargas for more clarity on the issue, and according to him, navigating it isn’t very straightforward.

“‘Tuesday naninita na si MAPA. We escalated the same day kay MACEA. MACEA relaxed its rules internally. Pero MAPA still kind of finds a way na manita,’ he said, adding that most of Makati City is made up of Barangay roads where the use of electric kick scooters is permitted.

“‘Complex yung issue to be honest. Working on things like this, hindi walk in the park.

“‘We are just lessening our dependency sa kotse. To lessen traffic. Less traffic and everyone is happy,‘ he added. ‘This is targeted sa mga individuals who can ditch their cars for daily transport.’”

“To motorists who often use the Manggahan Bridge in Pasig City, take note, as the local government unit will be implementing a new traffic scheme in the area.

“Starting Monday, August 2, a one-way traffic scheme will be implemented along Manggahan Bridge. The bridge will be exclusive to all Ortigas-bound vehicles, meaning only vehicles coming in from the side of East Bank Road headed towards West Bank Road will be allowed passage. Those looking to go north towards Marcos Highway along Amang Rodriguez Avenue will have to take Ortigas Avenue and do a U-turn towards East Bank Road.

“Those who regularly pass through the area may be familiar with the usual heavy traffic that builds up around the bridge. This thoroughfare is a common route for people coming in from Rizal and Marikina headed southbound towards Ortigas. It’s also a bottleneck area for those living in Manggahan, Santolan, and Rosario.

“The Pasig City LGU, however, didn’t specify until when this new scheme will be followed. It only mentioned in its advisory that this is an “experimental traffic scheme.” For a better look, you can check out the marked map below.”

“So it looks like the Department of Public Works and Highways (DPWH) was able to meet its adjusted timeline for the new Rockwell Bridge after all.

“The new piece of infrastructure, which is also referred to as the Estrella-Pantaleon Bridge, was opened at exactly 12:01am today. Work on the new bridge began in 2019, with construction initially expected to last 30 months. Total cost? P1.46 billion—although it is worth noting that this, like the Binondo-Intramuros Bridge being built in Manila, was funded via a grant by the People’s Republic of China.

“With four lanes and a total length of 506.46 meters, the new Rockwell Bridge connects Makati City to Mandaluyong City and is expected to alleviate traffic along EDSA by serving as an alternate route between the two cities. It’s being estimated to serve up to 50,000 vehicles on a daily basis, and it also features sidewalks that allow pedestrians to cross the Pasig River.”

“Cyclists and commuters in the capital have a lot to smile about today, as the Metro Manila Bike Lane Network has just been officially inaugurated.

“This project comprises various protected bike lanes from around the metro, including Quezon City’s 93km bike lane network launched back in May. The newly established bike lanes are separated using concrete delineators and rubber or bolted bollards. The lanes are also marked with white and green thermoplastic paint, as well as bike symbols, signage, and solar-powered road studs. Bike racks have also been installed in certain locations.

“The entire network cost more than P800 million and was funded under the Bayanihan to Recover as One Act—otherwise known as Bayanihan 2—that was signed on September 11, 2020. This is also part of a bigger 497km bike lane network that also includes the Metro Cebu and Metro Davao bike lanes that have been recently completed as well.

A truck accidentally dumped mud all over Guadalupe Bridge along EDSA

“Now, we know what the off-roading lot among you are thinking—unfortunately for your Jimnys, Jeeps, and Defenders, however, all this muck has been cleared up already.

“On a serious note, though, a dump truck caused quite a mess on EDSA early this morning after it accidentally spilled mud along a portion of Guadalupe Bridge. Metropolitan Manila Development Authority (MMDA) traffic chief Bong Nebrija shared images of the scene earlier today and, thankfully, the muck was quickly cleared by agency personnel before it could cause any serious accidents. Look:

“We reached out to Nebrija for more information regarding the accident. According to the official, the truck’s cargo hold was opened after the vehicle went over some bumps. Given the weather that we’ve been experiencing lately, that much mud and unsuspecting drivers approaching at speed is a perfect recipe for disaster.” 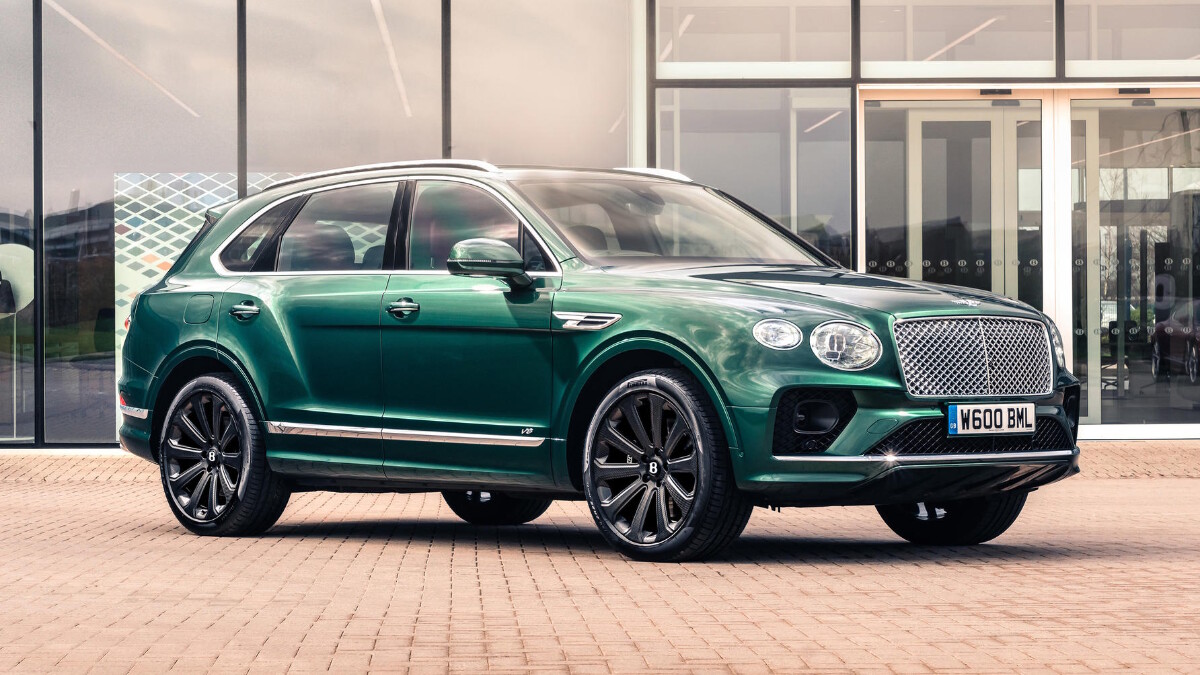 The Bentley Bentayga now rides on the largest carbon-fiber wheels in production
View other articles about:
Read the Story →
This article originally appeared on Topgear.com. Minor edits have been made by the TopGear.com.ph editors.
Share:
Retake this Poll
Quiz Results
Share:
Take this Quiz Again
TGP Rating:
/20