Check out the new Paseo de Roxas-Villar underpass in Makati

“It turns out that making pedestrians’ lives more convenient around these parts can be done.

“Those of you who regularly pass Ayala Triangle and Salcedo in Makati City will be pleased to know that moving between the two areas will now be more convenient thanks to the newly opened Paseo de Roxas-Villar Underpass.

“The new piece of pedestrian infrastructure was inaugurated over the weekend, and its opening should smoothen the flow of traffic at ground level as well. Construction began in 2019—which seems like ages ago, given everything that’s happened since—and it appears the wait was well worth it.

“The underpass comes equipped with escalators, proper lighting, and signages with clear directions. Perhaps most importantly, there’s plenty of space for pedestrian traffic to move in both directions, and it looks absolutely pristine. We hope the latter is something we can say about it a couple of years down the road.

“‘The underpass is just another part of the series of projects to make Makati City a walkable city,’ Makati City mayor Abby Binay said in a statement.”

“The Department of Public Works and Highways (DPWH) has officially inaugurated the Ciudad de Victoria Project in Bulacan, a new thoroughfare that enables easier travel between the municipalities of Bocaue and Sta. Maria.

“The new thoroughfare provides an alternate route for motorists passing through from Governor F.Halili Road to the Bocaue-San Jose Road in Sta. Maria, or vice versa. According to the DPWH, this cuts travel time between the two municipalities from 45 minutes to just 10 minutes.

“The Ciudad de Victoria Project is expected to alleviate traffic in the usually congested areas of Bulacan, particularly along the Bocaue section of MacArthur Highway. It will also allow faster movement of goods around the province.”

MRT-4 will have monorail design, be fully operational by 2028

“The Department of Transportation (DOTr) officially signed the contract for the MRT-4 project last week. During the ceremony, the agency laid out more details regarding the new rail line.

“According to the DOTr, the upcoming MRT-4 line will feature a monorail design, meaning the trains will run on a single rail. The agency says the design will provide flexibility and minimize footprint, as the base structure will occupy less space. The train will also be able to operate through sharp curves and relatively steep gradients.

“Based on what the DOTr has mapped out, it appears the MRT-4 will not directly connect to the LRT-2 line. However, the layout shows that it will intersect with the MRT-3 and the Metro Manila Subway once the latter is up and running.

“DOTr undersecretary Timothy John Batan also presented the indicative timeline, which begins with a detailed engineering design phase that will start from the first quarter of this year. Right-of-way acquisition will begin in Q2 of 2022, procurement in Q2 of 2023, and construction in 2024. The agency targets full operations of the train line by 2028.

“Batan added that the DOTr will work on an implementation timeline that will cut down the construction period and allow partial operability at an earlier date. No further details were provided.”

“A fair warning to motorists fond of fitting their cars and motorcycles with loud aftermarket exhausts: The proposed ‘Anti-Muffler’ ordinance in Manila City has now been signed into law.

“Section 5 of Ordinance No. 8772 specifies the prohibited acts as follows: ‘It shall be unlawful for any person to use or operate a motor vehicle with [a] modified muffler that emits and produces noise levels beyond the national standard of 99dB taken at an engine speed of 2,000 to 2,500rpm.’

“Manila Traffic and Parking Bureau (MTPB) and Philippine National Police (PNP) personnel will be the primary enforcers of the law. Penalties for the first, second, and third offense equate to fines of P1,000, P3,000, and P5,000, respectively. Each offense shall also result in the removal of the vehicle’s modified muffler or exhaust pipe.

“Violators will have their driver’s licenses confiscated by the deputized enforcement officers and will be issued five-day temporary permits. The licenses will be returned after the fines have been settled and the vehicle in question has passed a second noise-level test.

“If the vehicle fails the second test, it will undergo the necessary repairs which shall be overseen by the city government. The MTPB and PNP will accredit certain motor vehicle repair shops for this purpose. Violators will be the ones to shoulder the costs.

“As mentioned in a previous story, the ordinance exempts vehicles ‘designed for use in sports competitions, motor shows, and [motorcycles] with a displacement of 400cc and above.’”

SMC clarifies PAREX will not impact heritage sites in Intramuros

“‘We’re a free country, and we respect everyone’s right to voice their opposition,’ he said. ‘In fact, after setting the record straight on some issues, we’ve largely let the critics do all the talking. We listen to valid opinions and points, but we just can’t let outright lies pass.’

“According to Ang, the alignment of PAREX—which has also been approved by the government—will run along the Binondo side of the river and not the Intramuros side. This will supposedly avoid any significant impact on Intramuros and will instead enable PAREX to promote heritage sites not just to motorists but also to commuters who will be using the expressway’s bus rapid transit system.

“‘Right now, what we have is a basic alignment, developed with and approved by government,’ Ang said. ‘And while this basic alignment already avoids Intramuros, it is by no means final. Other areas that people will have issues with can still be adjusted, based on inputs from government and stakeholders during the detailed engineering design stage.’

“The SMC boss also mentioned that there will be adjustments made to address areas of concern such as the Arroceros Forest Park, as the current basic alignment of PAREX will run along the vicinity. He said that this can be easily remedied by raising, lowering, or even moving the expressway.

“‘The bottom line is, we are committed to do this right, and nothing will get done without full approval of government,’ added Ang. ‘In the coming weeks, we will present visuals of what this infrastructure will look like and we assure you it will be adaptive, inclusive, and ecologically resilient benefitting not just a few, but all of us.’”

PNP: Almost 90% of stolen vehicles in 2021 were motorcycles

“If you own a motorcycle or are planning to get one, you have to read this: The Philippine National Police (PNP) has reported that the number of motorized vehicles that were stolen from January 1 to September 30 this year totaled 1,615 units.

“That figure comprises 207 four-wheelers and 1,408 motorcycles. On the flip side, police authorities confirmed a 6.76% drop in stolen vehicles and a 14.61% decrease in motorcycle theft compared with the same period in 2020.

“According to the data from the PNP–Highway Patrol Group (HPG), the number of four-wheelers and motorcycles stolen during the first nine months of last year reached 222 and 1,649 units, respectively.

“Turns out, there is a roughly 9:1 ratio between stolen motorcycles and four-wheelers as reflected in the 2020 and 2021 data.

“Meanwhile, the PNP also reported that the number of persons who were killed from vehicular accidents (both two- and four-wheelers) reached 3,543 in the first nine months of this year. The same period saw 35,080 injured victims and 67,815 damaged properties.

“During the same period in 2020, the number of fatalities in vehicular accidents totaled 3,045 persons, while there were 32,814 injured victims and 69,703 damaged properties.”

“Slowly but surely, the North-South Commuter Railway (NSCR) project is starting to take shape. After giving us a peek at what the finished PNR Clark Phase 2 will look like, the Department of Transportation (DOTr) has now shared that testing of the first train set for the PNR Clark Phase 1 has begun.

“The rolling stock—manufactured by the Japan Transport Company and Sumitomo Corporation Joint Venture (JSJV)—will undergo factory acceptance tests (FATs) to ensure its compliance with international standards. It will also help guarantee that the trains are properly equipped and functioning properly.

“The tests are currently being done at the Japan Transport Engineering Company’s facility in Yokohama, Japan. You can check out photos of the new trains below:

“These trains are scheduled to arrive in the Philippines by the first week of December 2021. Once completed, the PNR Clark Phase 1 will cut travel time between Tutuban in Manila and Malolos in Bulacan from an hour and a half to just 35 minutes. The railway is expected to ferry around 300,000 passengers daily.”

“‘We are finally at the tail end of the construction of our CCLEX project and I, together with my colleagues, share the incredible pride in this milestone achievement,’ said Metro Pacific Tollways Corporation president Rodrigo Franco.

“‘After today’s main bridge deck connection, we look forward to another milestone and that is opening CCLEX to the public in the first quarter of 2022,’ said CCLEC president and general manager Allan Alfon. ‘We can’t wait to see Cebuanos enjoy the ultimate expressway experience afforded by using this bridge.’

“CCLEC shares that the expressway will be utilizing an all-electronic toll system to enable smoother traffic flow.

“Once completed, CCLEX will allow easier and seamless travel between Cebu City and Mactan Island. You can check out more photos of the ongoing construction below:”

“Yes, the Philippines is still lagging when it comes to the adoption of greener forms of mobility. This doesn’t mean, though, that there aren’t companies at least trying to make a dent in the situation.

“According to the company, it harvested a total of 171 megawatt-hours of electricity last year. That’s about the equivalent of planting 4,006 trees. The firm added that it plans to install even more solar panels along NLEX and the Subic-Clark-Tarlac Expressway (SCTEX) in the near future.

“The biggest contributor to the company’s solar-panel initiative was the Bocaue Barrier, which saved 50,618kg of CO2 emissions. Balintawak Toll Plaza came in at second with 42,980kg saved. That’s equivalent to 1,511 and 1,283 trees planted, respectively.

“‘The things we do are guided by our commitment to the greater good. We are seizing the opportunity to do more for our motorists and the environment by improving our operational efficiency and promoting sustainability. This is deeply ingrained as one of our core values,’ NLEX Corporation president Luigi Bautista said in a statement.”

“The ongoing construction of the MRT-7 project will continue to affect traffic along North Avenue over the next few months. To those who often pass through this area of Quezon City, take note.

“According to the latest advisory from the Metropolitan Manila Development Authority (MMDA), a portion of the eastbound side of North Avenue headed towards Elliptical Road will be closed to traffic from October 15, 2021 to June 1, 2022.

“Vehicles entering Wildlife and Veterans Memorial Medical Center will still be able to pass through North Avenue, while those headed to Elliptical Road are advised to take Quezon Avenue via Agham Road instead.

“The MMDA says this closure is expected to have less of an impact on traffic as this portion has been previously closed off to the public already. You can check out the official Facebook post below:” 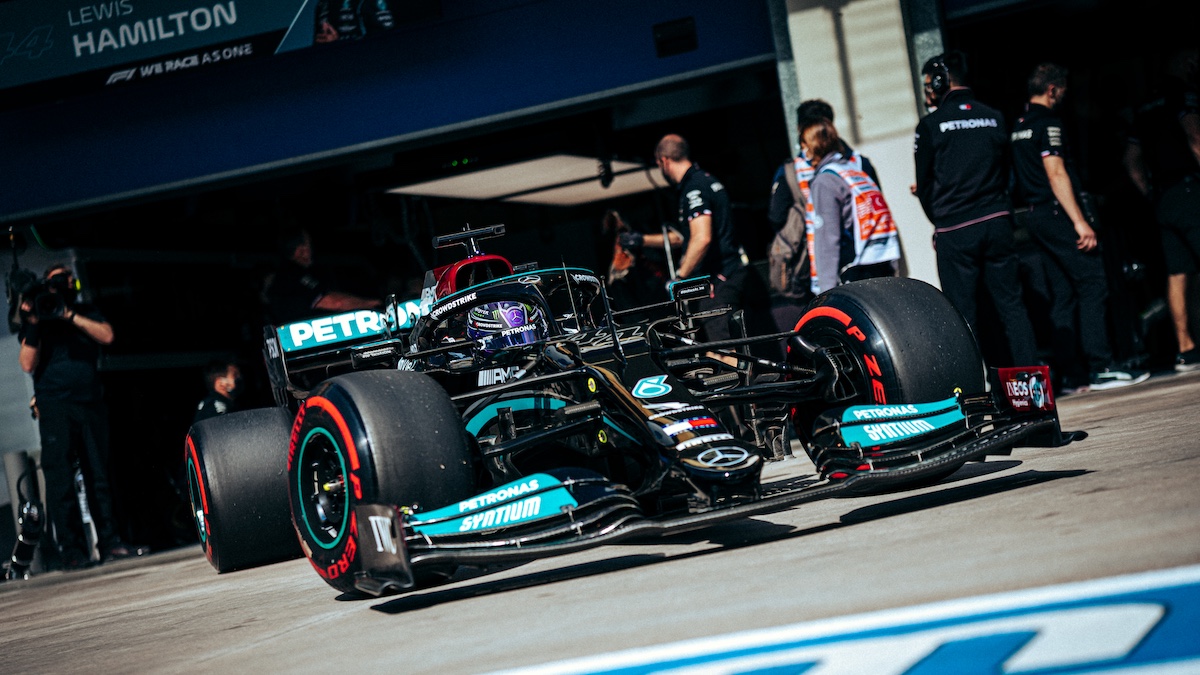 Beginning 2026, Formula 1 will be using 100% sustainable fuels
View other articles about:
Read the Story →
This article originally appeared on Topgear.com. Minor edits have been made by the TopGear.com.ph editors.
Share:
Retake this Poll
Quiz Results
Share:
Take this Quiz Again
TGP Rating:
/20