Plus, travel guidelines for fully-vaccinated individuals
by TopGear.com.ph | Jul 11, 2021

“The Light Rail Transit Authority (LRTA) has officially opened the LRT-2 East Extension stations, so commuters can now take the train from either Antipolo or Marikina going to other parts of Metro Manila, or vice versa.

“What’s more, the Department of Transportation (DOTr) has promised commuters free rides for the first two weeks. For a detailed look at the official fare matrix, you can refer to this previous story of ours. If you want to see how operations fared on the first day, read our story here.

“The new Marikina Station is located in front of Robinsons Metro East near Mayor Gil Fernando Avenue in Marikina City. Meanwhile, while the Antipolo Station is in front of SM Masinag near Sumulong Highway in Antipolo City.

“For those commuting via the new stations, though, take note that passengers coming in from Antipolo or Marikina need to alight at Santolan Station and transfer to a new train leading to Recto. While travel may not be seamless at the moment, the DOTr expects the LRT-2 East Extension to cut travel time from Recto to Antipolo to just 30-40 minutes.”

The free ride has come to an end

“Beginning July 12, motorists will have to begin paying toll to use the Skyway Stage 3. So, how much will the San Miguel Corporation (SMC) be charging? Have a look at the Skyway Stage 3 Class 1 (cars, jeepneys, vans, AUVs, SUVs) toll rates provided by the Toll Regulatory Board (TRB) below: 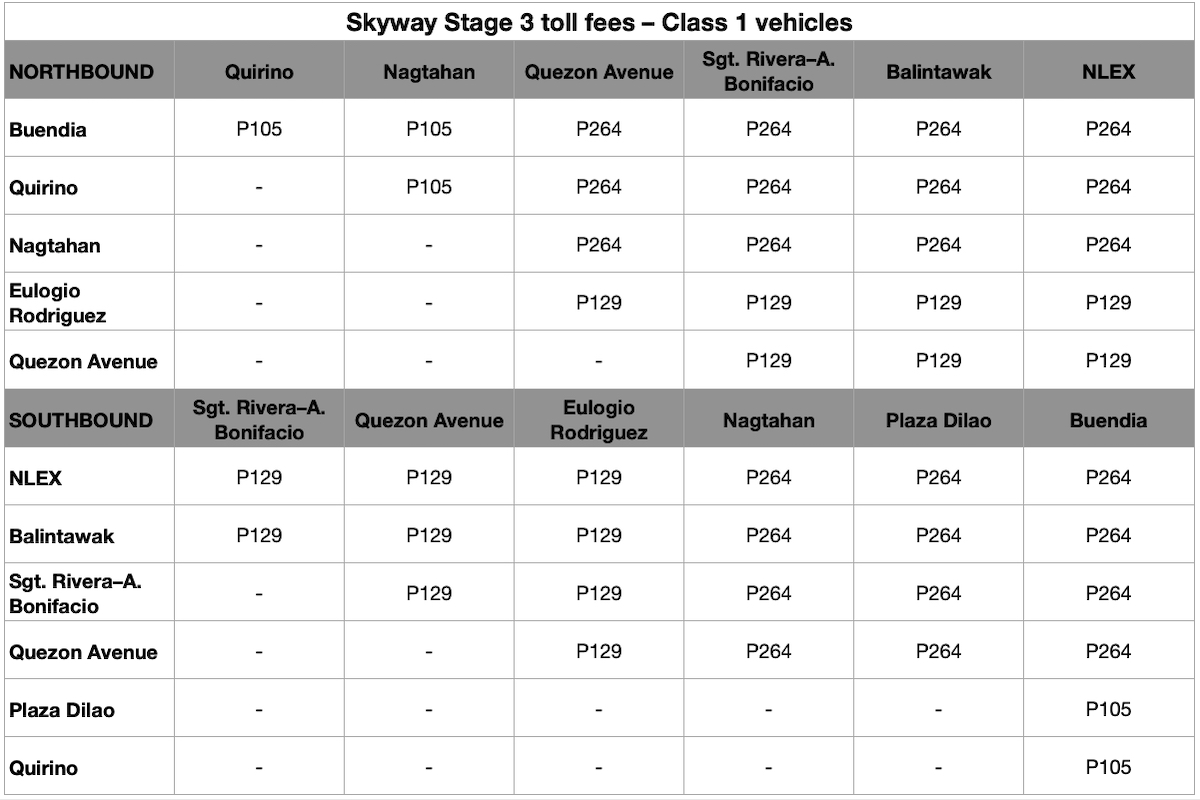 “SMC has also announced that the elevated expressway will only be open to Autosweep RFID-equipped Class 1 vehicles starting July 12, making it a no-truck zone. If your Autosweep account is running low on load, check out our guide to reloading it here.”

“Easytrip RFID users, take note. Easytrip Services Corporation has announced that eight of its stations are closed effective July 8. These stations are located along northern tollways including the North Luzon Expressway (NLEX), the Subic-Clark-Tarlac Expressway (SCTEX), and the Subic Freeport Expressway (SFEX).

“For those of you who need to reload your accounts, as well as those who wish to have RFIDs installed, you’ll have to head to other sites. The company has enumerated the following:

“There are also other ways to reload your Easytrip accounts—you can check out our guide here. In addition, you can also now use your Smart or TNT mobile load to top up your accounts.”

“Images showing steps being built for pedestrians to climb up onto the newly opened BGC-Ortigas Bridge recently popped up on social media. Judging by how high up the point of entry will be, it appears those of us without motorized transportation will be in for quite a climb if we want to cross Pasig River this way.

“The issue? There are sidewalks toward both ends as well as on the main portion of the bridge crossing the river, but there are sections where the pedestrian walkway gets cut off abruptly. There’s even a large ‘no pedestrians’ sign there for good measure. Hence the need for a separate entry point. 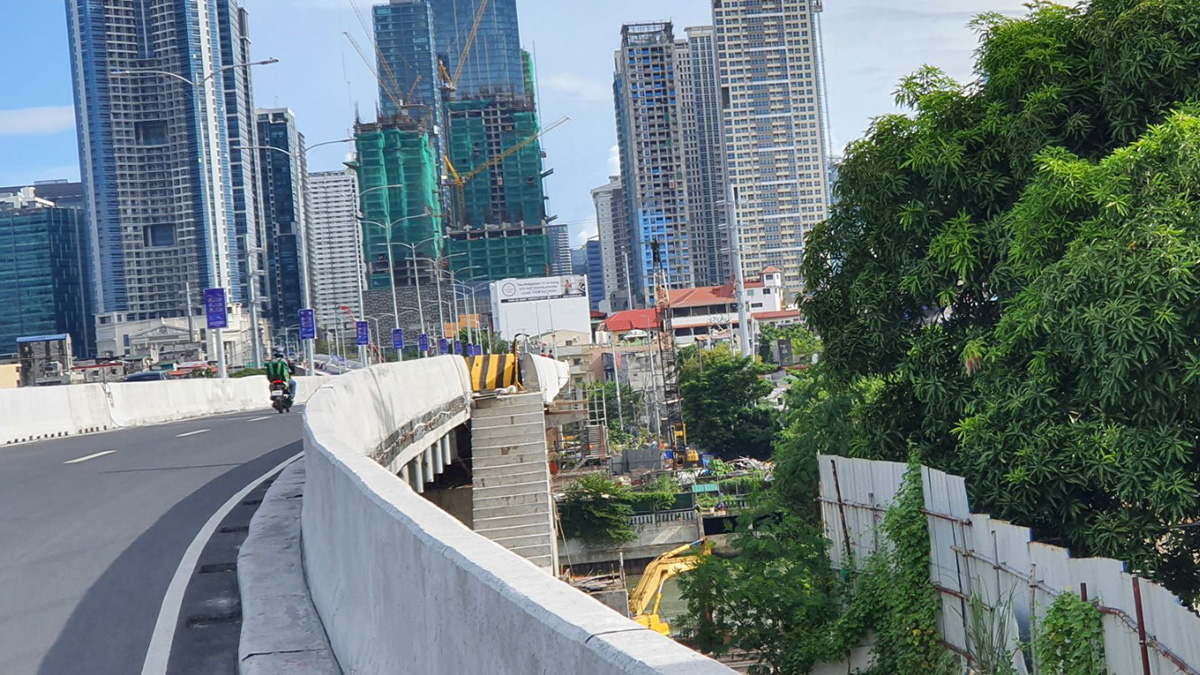 “It’s entirely possible that the sidewalk on the bridge itself will eventually be connected to where it lands on both sides. We’ve reached out to the Department of Public Works and Highways (DPWH) regarding access points for pedestrians on the BGC-Ortigas Bridge, but are still awaiting a reply.”

RT-PCR testing for local travel is here to stay for now, depending on your destination

“It will be up to local government units (LGUs) to decide whether or not travelers entering their jurisdiction will be required to present a negative COVID-19 RT-PCR test.

“That’s not to say, however, that your COVID-19 jabs are for naught as far as local travel is concerned. The Inter-Agency Task Force for the Management of Emerging Infectious Diseases (IATF) has confirmed that, in lieu of a negative RT-PCR test, LGUs also have the option of accepting vaccination cards (whether issued locally or overseas) or a Certificate of Quarantine issued by the Bureau of Quarantine for inbound travelers.

“Initially, the IATF had issued Resolution No. 124-B, which dropped the pre-travel swab-test requirement for fully-vaccinated and asymptomatic local travelers. Under the resolution, an individual is considered fully-vaccinated two weeks after receiving the full dose of a single- or two-dose COVID-19 vaccine.

“On July 7, however, the Department of Health (DOH) hit pause on the implementation of the new policy, after local government leaders raised concerns about verifying the authenticity of vaccination cards, especially since there is no standard format used across the entire country.

“The DOH also maintained that prior to the release of Resolution No. 124-B, the IATF’s original travel guidelines (Resolution No. 101) required RT-PCR testing for local travel, and that ‘antigen testing is never recommended for border control purposes.’”

“Travelers intending to go to the Naga City in Camarines Sur and Matnog in Sorsogon, now have the option of direct travel by bus: The Parañaque Integrated Terminal Exchange (PITX) has announced that trips bound for the two Bicol destinations are now available.

“Trips to Naga City from PITX began on June 30 and depart every other day at 6pm; return trips to PITX are available on the days in between and depart from Naga City also at 6pm. The full fare is priced at P757, while the discounted fee costs P605.

“Matnog-bound bus rides from PITX began on July 2 and depart every other day at 2:30pm; same as with the Naga City trips, return journeys are available on the days in between and take off from Matnog City at 1:30pm. The full fare is P1,176 while the discounted rate is priced at P941.

“As with the Legazpi-, Tabaco-, and Tiwi-bound PITX trips that began in June, all travelers must present the following requirements to be allowed to proceed with their planned journey:

“This list of requirements was released on July 2. We will update this story if there are any changes.

“Aside from Bicol trips, new routes to Quezon are planned for the month of July. Currently, trips to the following destinations in Quezon are available: Calauag, Guinayangan, San Francisco, Infanta, Lucban, Mauban, Sampaloc, San Andres, Tagkawayan.”

“It looks like the Metropolitan Manila Development Authority (MMDA) is done calling out motorcycle riders who stop to take shelter under overpasses during heavy rains. Instead, the agency has now opened an emergency lay-by on EDSA to serve riders during downpours.

“The new lay-by is located under the Quezon Avenue flyover. MMDA chairman Benhur Abalos said that all riders will be allowed to stop here so they can avoid blocking the road during inclement weather.

“The area has designated entry and exit points as well as proper signage. Abalos, however, reminded motorists that the lay-by will only serve as rain shelter and not as parking space. There will be MMDA personnel assigned to secure the area.

“What’s more, the MMDA also plans to set up more emergency lay-bys under flyovers in other parts of EDSA as well as on C5 and Roxas Boulevard. There will also be lay-bys put up along Alabang Road, Parañaque-Sucat Road, and Chapel Road once the areas have been cleared of obstructions. The MMDA will put up more pocket gardens under flyovers around the metro, too, as part of its efforts to improve urban aesthetics and fight urban decay.”

License plate ending in 6 and 7? You have more time to renew your registration

“The Land Transportation Office (LTO) has announced that it is extending the registration validity of license plates ending in 6 and 7 for the entire country. Prior to this, the extension had only applied to regions currently under modified enhanced community quarantine (MECQ).

“The registration validity of plates ending in 6 and 7 is extended until August 31 and September 30, respectively. Until then, no surcharges and penalties will be collected for these plate numbers.

“The number of cars out on the road isn’t the only indication of how well the local motoring scene is doing. You can also take into account the number of motorists heading to the LTO to apply for a driver’s license, too.

“If we’re going by the DOTr’s numbers, Philippine motoring is alive and kicking—and apparently, getting pretty crowded. In a Facebook post, the DOTr bared that a total of 27,620,091 driver’s licenses and permits were issued by the LTO from July 2016 to March 2021.

“DOTr head Arthur Tugade also claimed that the license backlog from the start of the current administration has now been addressed, and that the agency will push forward with implementing 10-year of driver’s license validity this year ‘under the LTO’s demerit system.’

“Last year, LTO chief Edgar Galvante said the demerit system will help reduce the number of crashes and accidents that take place on Philippine roads. It categorizes traffic violations into three classes, each with a corresponding amount of demerit points: ‘Grave’ violations are worth five points, while ‘less grave’ and ‘light’ violations are worth three points and one point, respectively. Motorists with a clean slate are entitled to 10 years of LTO driver’s license validity.”

“Multiple northbound and southbound lanes along EDSA are set to close for 80 days to make way for the ongoing construction of the MRT-LRT Common Station.

“According to an advisory from the local government unit of Quezon City, the affected lanes are located near the corners of North Avenue and West Avenue. The lanes will only be closed from 11pm to 5am daily starting July 9. The QC LGU and the MMDA are assuring the public that there will be no fewer than six lanes—three southbound, three northbound—that will remain open for this duration.

“There will be traffic barriers as well as road safety and directional traffic signs that will be put up near the area. There will also be enforcers deployed to ensure the smooth flow of traffic in these parts.” 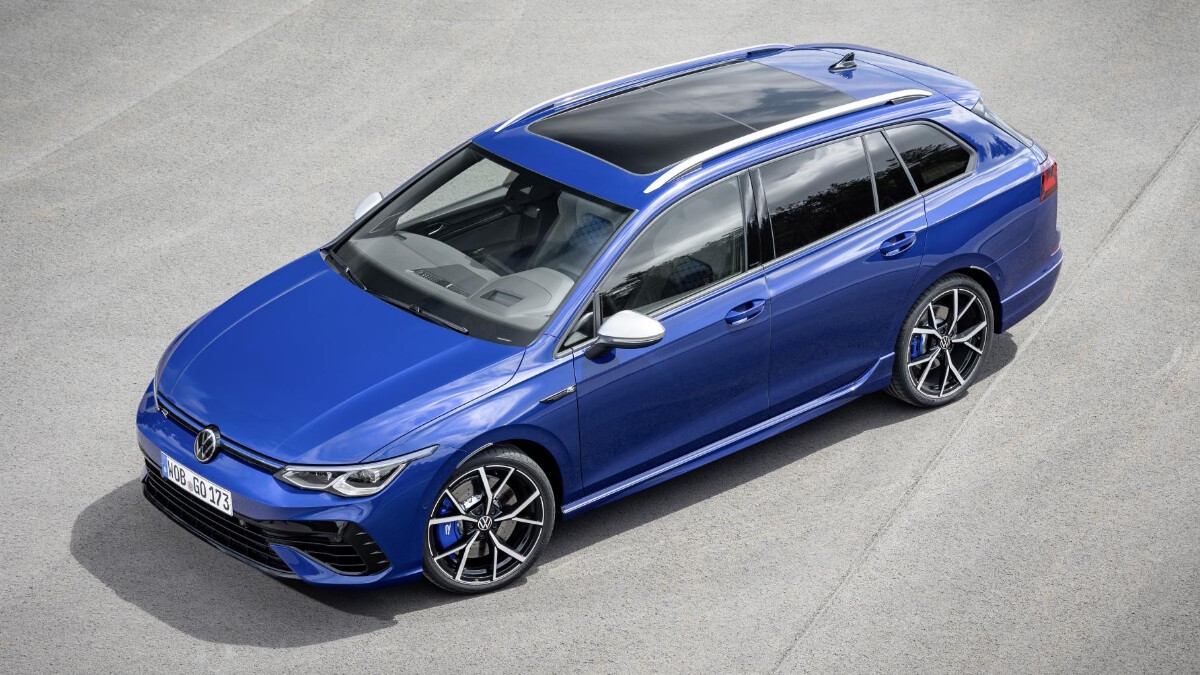 The Volkswagen Golf R Estate could be the wagon of our dreams
View other articles about:
Read the Story →
This article originally appeared on Topgear.com. Minor edits have been made by the TopGear.com.ph editors.
Share:
Retake this Poll
Quiz Results
Share:
Take this Quiz Again
TGP Rating:
/20