First, the big changes on the implementation of MVIS and the Child Car Seats law

“During his noontime briefing on February 11, Presidential spokesperson Harry Roque said that President Rodrigo Duterte has ordered to defer the implementation of the Child Safety in Motor Vehicles Act. The President also said that the Land Transportation Office’s (LTO) new Motor Vehicle Inspection System (MVIS) should no longer be mandatory.

“There have been numerous complaints about the Child Safety in Motor Vehicles Act as well as the rollout of the new MVIS from the motoring public. As a matter of fact, legislators have been calling for the deferment of both of these new policies.”

Here’s how the DOTr, the LTO, and the PMVICs reacted to the presidential order

“‘We will comply.’ This was the message both the LTO and the DOTr conveyed to the public after being asked about President Rodrigo Duterte’s recent order with regard to MVIS testing.

“Perhaps caught off-guard by the announcement as it came right before a scheduled press conference regarding private motor vehicle inspection centers (PMVICs), neither the LTO nor the DOTr could give a clear explanation as to what the President meant by ‘not mandatory.’ You may recall that under the new MVIS, vehicle roadworthiness inspection prior to LTO registration is to be conducted at PMVICs. In the old system, only an emissions testing certificate from private emission testing centers (PETCs) was required.

“Both the LTO and DOTr, however, said they will comply with the order.

“The Vehicle Inspection Center Operators Association of the Philippines (VICOAP), which is made up of PMVIC owners, has already agreed to lower its inspection fees. Effective immediately, PMVICs will charge light vehicles only P600 for roadworthiness inspection—the same rate charged by PETCs. Prior to this, PMVICs were charging P1,500 to P1,800 per light vehicle. Motorcycles and jeepneys, meanwhile, will be charged P500 and P300, respectively. A re-inspection fee for vehicles that fail the test will not be imposed within one year of the initial inspection.

“According to VICOAP president Iñigo Larrazabal, the move to adjust PMVIC testing fees is all about safety. ‘Working closely with Congress and the DOTr, we have as a group agreed to operate at a loss and lower our fees,’ he said during the press conference.’”

But where should you really go for roadworthiness inspection for your vehicle registration?

“According to the DOTr, Duterte’s order means motorists can now choose between fulfilling LTO vehicle registration requirements at a PMVIC or a PETC.

“Again, we have to point out that nothing here is set in stone until the DOTr or the LTO releases something in writing. As of now, though, this is the definition of ‘not mandatory’ the two agencies are going with.”

The Metropolitan Manila Development Authority (MMDA) recently announced that the General Tinio U-turn slot in Caloocan City, one of the 13 EDSA U-turn slots that were initially closed in September 2020, has been reopened. The decision was made following complaints about heavy traffic in the area.

“MMDA chairman Benhur Abalos added that the U-turn slot will remain open until the elevated bus ramps that the MMDA is eyeing are finally constructed. ‘We are already coordinating with the Department of Transportation (DOTr) and the Department of Public Works and Highways (DPWH) for the design and eventual building of the elevated bus ramps,’ he said.”

Three new bridges are being planned for Marikina City

“The DPWH has signed a Memorandum of Understanding (MOU) with the Asian Development Bank (ADB) for a loan application for the construction of three bridges across the Marikina River. The three projects are estimated to cost more than P9 billion in total.

“The DPWH said in its announcement that its Unified Project Management Office (UPMO) Bridge Management Cluster and consulting firm Dasan JV are currently working on the detailed engineering designs (DEDs) of the three structures. The agency also said that the projects are fully supported by the local government units in these areas.”

The Katipunan Avenue Extension project will finally be completed this year

“According to the DPWH, the new 3.38km Katipunan Avenue Extension project in Quezon City is targeted for completion and opening in 2021.

“‘We are fast-tracking the construction of Phases 1 and 2 from Metropolitan Waterworks and Sewerage System (MWSS) Property and Government Service Insurance System (GSIS) Properties to Vista Real Subdivision, which are now 60% and 90% complete, [respectively],’ said DPWH secretary Mark Villar.

“DPWH Quezon City First District engineer Loida Busa also said that the agency has already delivered the 800-meter road extension and the 22.5-meter permanent bridge along Vista Real Classic Subdivision in Barangay Batasan Hills. Once complete, the new road will provide an alternate route from Katipunan to Batasan, toward Rizal Province to ease traffic along Katipunan Avenue and Commonwealth Avenue. The latter is also expected to be decongested by at least 10,000 vehicles thanks to the new road.”

Does your vehicle’s plate number end in 2?

“After extending the registration validity of vehicles with plate numbers ending in 1, the LTO is doing the same for those with plates ending in 2.

“According to the agency’s recent announcement, motor vehicles with plate numbers ending in 2 will have their registrations extended to as far back as March 8, 2021, depending on the original registration schedule. You can check out the table below for more details.”

Skyway Stage 3 off-ramps on A. Bonifacio and E. Rodriguez are now operational

“San Miguel Corporation (SMC) has announced that as of February 11, 2021, the A. Bonifacio northbound off-ramp (right before the Cloverleaf Mall in Balintawak) and the E. Rodriguez southbound off-ramp (on Araneta Avenue) of Skyway Stage 3 are already operational.

“‘Our Skyway 3 engineers and construction personnel worked double time to be able to open these two new ramps, better serve motorists, and provide them seamless and convenient travel,’ said SMC president and CEO Ramon S. Ang. ‘With the opening of these ramps, those who are coming from Alabang, Parañaque, Las Piñas, Pasay, or Makati will no longer have to take EDSA and get stuck in several traffic chokepoints in order to get to Balintawak. Meanwhile, those coming from NLEX headed to Quezon City can opt to take Skyway 3 to get to E. Rodriguez Avenue.’

“Check out the list below for all currently operational entry and exit points.

“In case you might be asking, we still have no word yet on just how much passage through this 18km tollway will cost.”

“If you have plans to travel south this long weekend, and your itinerary happens to include Ternate in Cavite, then be aware that the local government is now collecting a P20 ecological fee from cyclists, riders, and motorists passing through the municipality. The ecological fee will be collected only on weekends, which is when the town sees an increased volume of cyclists, riders, and motorists because of visitors flocking to Kaybiang Tunnel, located along the Nasugbu-Ternate Highway in the municipality of Maragondon.

“In a Philippine Information Agency report, Ternate officials justified the collection of the fee, saying it is in accordance with Municipal Ordinance 5-2014, or the Ternate Tourism Ecological Fee Ordinance. ‘This is the way we can meet the needs of the local government to provide for the cleaning of garbage left by riders and tourists on the road or in Kaybiang Tunnel, and to be used for the mobility of police for peace and order, rescue by MDRRMO in times of accidents within the vicinity,’ said Bryan Novejas, who is part of Ternate mayor Lamberto Bambao’s staff. ‘Saan naman kami kukuha ng funding—we are only a fourth-class municipality.’

“Municipal treasurer Brendalyn Olano assured that residents of Nasugbu will be exempted from paying the ecological fee upon providing proof of residency.”

Thank you for the service, Lalafood

“Lalafood will officially cease operations on February 15, 2021, the company confirmed on February 8.

“‘In 2018, the Lalafood incubation project was started by Lalamove as a means to explore the food-delivery sector,’ it said in a statement. ‘While as a company we have learnt a great deal from Lalafood, a decision has been made to redirect our focus entirely on our core Lalamove delivery business.’

“Lalafood thanked all of its customers for their continued support, as well as its partner riders and merchants who made everything possible.

“Lalamove, for its part, said 2021 will continue to be another year of ‘strong growth’ in the country: ‘We are committed to strengthening our investment in the Philippines to better serve our customers and provide more opportunities to our driver-partners and employees.

“‘With expansion plans already underway in Manila and to the Pampanga province in February 2021, we place great confidence in the Philippine market and we are excited for what lies ahead in 2021. The year is just unfolding and there’s so much in store for us all.’” 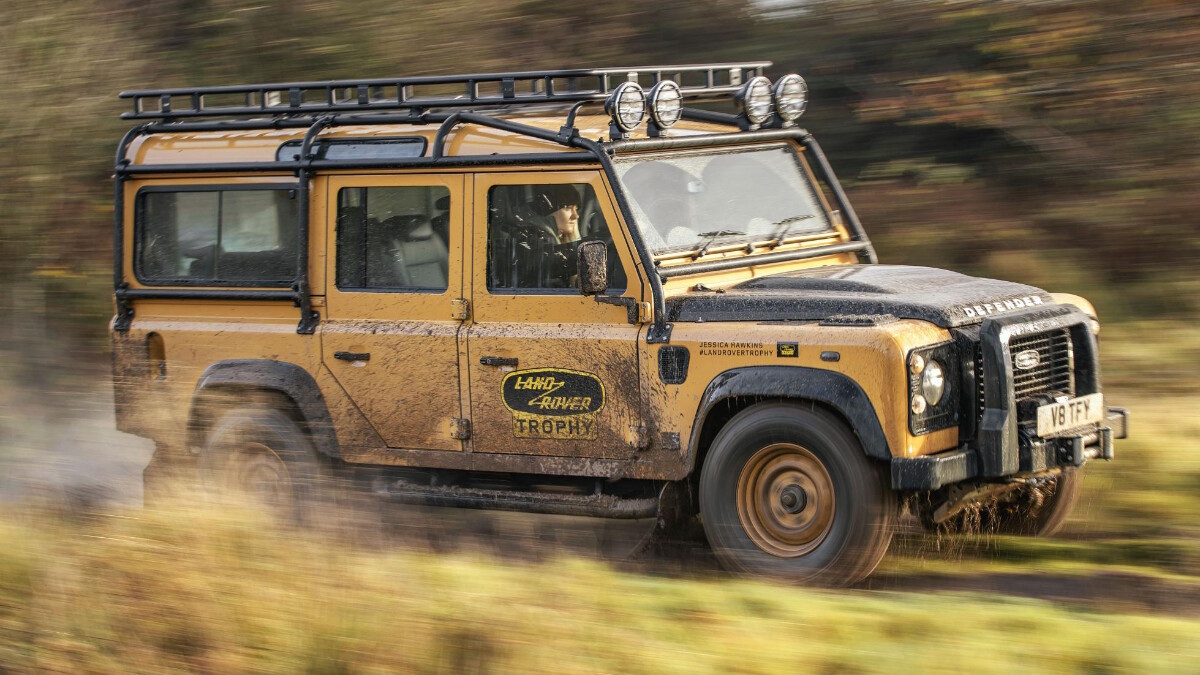 Land Rover is building just 25 units of this new-old Defender V8 Trophy
View other articles about:
Read the Story →
This article originally appeared on Topgear.com. Minor edits have been made by the TopGear.com.ph editors.
Share:
Retake this Poll
Quiz Results
Share:
Take this Quiz Again
TGP Rating:
/20