“Metro Manila mayors have agreed to synchronize curfew hours, from 10pm to 5am, for two weeks starting Monday, March 15, to help arrest a surge in coronavirus infections, the Metropolitan Manila Development Authority (MMDA) has announced.

“Authorities have also locked down some barangays and kept condominiums under tight watch as daily cases have surged to levels not seen since October 2020.

“The Department of the Interior and Local Government previously called on mayors of the capital region to implement a uniform curfew policy to make public compliance easier.”

“Last month, Malacañang announced that motorists would no longer be required to undergo testing at private motor vehicle inspection centers (PMVIC) and would be able to fulfill their Land Transportation Office (LTO) requirements by visiting private emission testing centers (PETC) instead. PMVICs also agreed to lower their testing fees.

“The announcement was pretty straightforward, but a memorandum circular recently released by the Department of Transportation (DOTr) has caused some confusion online. According to DOTr Memorandum Circular No. MC-SC-2021-01, ‘visual inspection of the roadworthiness/safety features of a motor vehicle shall be mandatory’ along with the usual emissions test from a certified PETC or PMVIC. 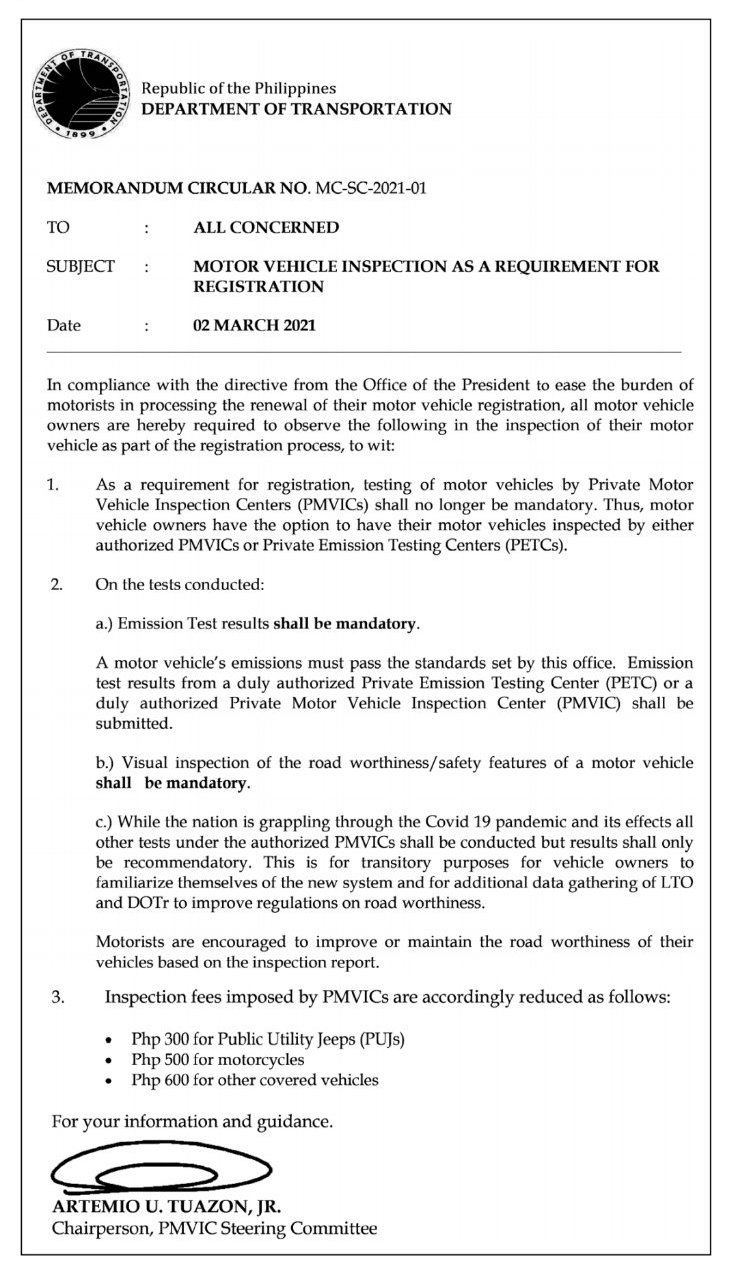 “We reached out to DOTr assistant secretary Goddes Hope Libiran, and according to her, this inspection can be conducted at an LTO Motor Vehicle Inspection System (MVIS) facility, too, and that this procedure has been in place long before PMVICs came into play.

“‘Allow me, please, to clarify na matagal nang may visual inspection. Even prior to the establishment of PMVICs. Nagkaroon kasi ng kalituhan yung iba noon because they thought MVIS and PMVIC are the same. They are not. MVIS is the system, PMVIC is the private facility,’ Libiran explained, adding that some people may have mistakenly believed the MVIS visual inspection is no longer required.

DOTr: Only 80 vehicles may be tested at each PETC daily

“The DOTr has issued a memorandum order that reinstates the daily limit on the number of vehicles that are allowed to undergo testing at private emission testing centers (PETCs).

“‘In the exigency and best interest of the public, and with the imposition of less stringent community quarantine measures and the gradual resumption of operations of the LTO and emission testing sites, Section 6.6 of the Department Order 2012-10 is reinstated effectively immediately,’ according to the document signed by DOTr undersecretary Atty. Reinier Paul Yebra.

“On July 6, 2020, the above-mentioned limits were lifted to reduce the testing backlog at PETCs—and, subsequently, the vehicle registration backlog at LTO field offices—that had resulted from the imposition of COVID-19 lockdowns and strict health protocols.

“But with the gradual return of normal operations at LTO field offices, the testing limit at PETCs is now being reinstated—meaning each facility may test a maximum of 32 diesel vehicles and 48 gasoline vehicles, for a total of 80 vehicles. The DOTr has also instructed PETCs to revert to their original business hours of 7am to 5pm, Mondays to Fridays.

“According to our sources, during the period that PETC testing limits were lifted, each facility tested, on average, about 150 to 180 units per day.

“Currently, there are still many PETCs dealing with long queues. Some motorists argue that this latest move by the government is being used as an opportunity to convince vehicle owners to avail themselves of the services of PMVICs instead.”

No face mask? You could be fined or imprisoned

“The MMDA has released a list of the capital’s local government units (LGU) and their corresponding penalties for failing to wear a mask and not adhering to social-distancing measures. Look:

“In case you’ve forgotten forgot, the wearing of face masks is required inside vehicles, too, unless you’re sitting alone in one.”

No surprises here: Fewer road mishaps were recorded in 2020 due to lockdown measures

“With fewer vehicles on the roads due to COVID-19 lockdown measures and a temporary nationwide public transportation ban, the MMARAS recorded a total of 65,032 accidents in 2020. That’s a drop of 46.6% compared with 2019’s 121,771 total recorded accidents.

“Partly due to its sheer size, Quezon City is Metro Manila’s top city by far when it came to road crashes with 22,494 cases. Manila comes in at a distant second with a total of 6,655 incidents, and rounding out the top three is Makati City with 4,508 incidents. Pateros recorded the fewest number of accidents last year with just 115. 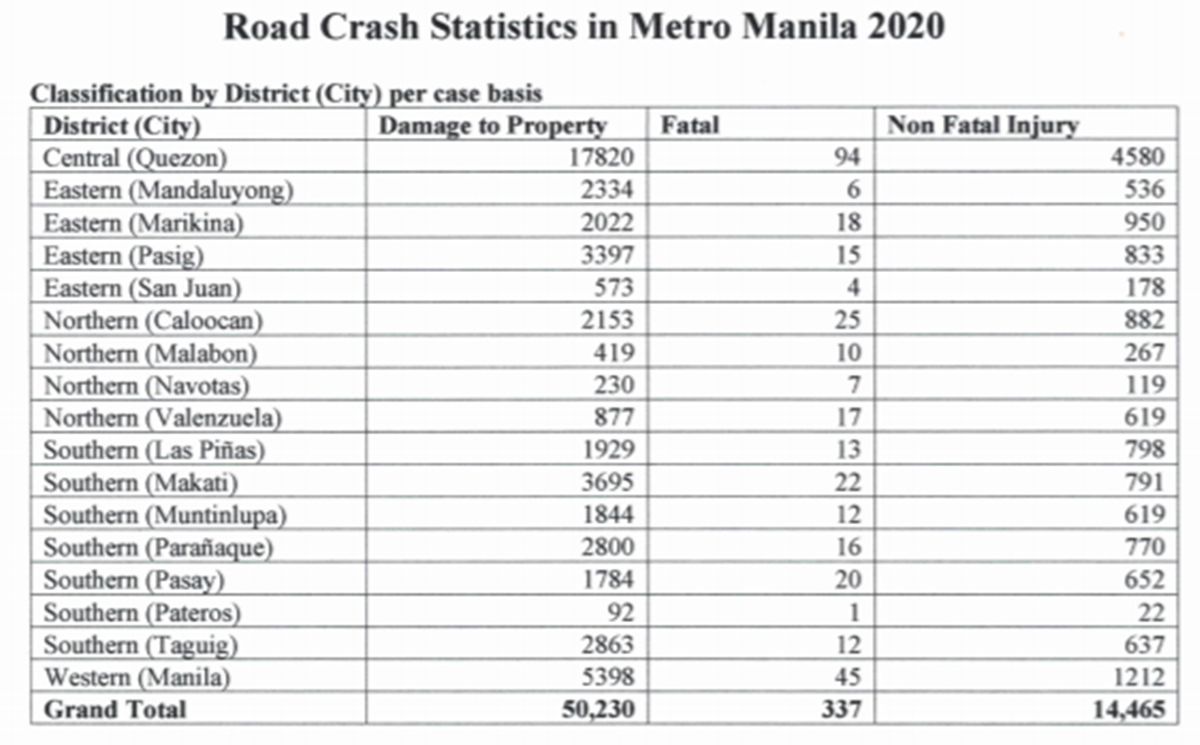 Unsurprisingly, the lowest accident total was recorded in April 2020 during the height of the country’s COVID-19 lockdown. Only 1,535 incidents were recorded during this month.”

Most fatal road accidents last year happened between 7pm and 12am

“According to the 2020 MMARAS report, the period from 7pm to 12am recorded the highest number of fatal traffic incidents last year. 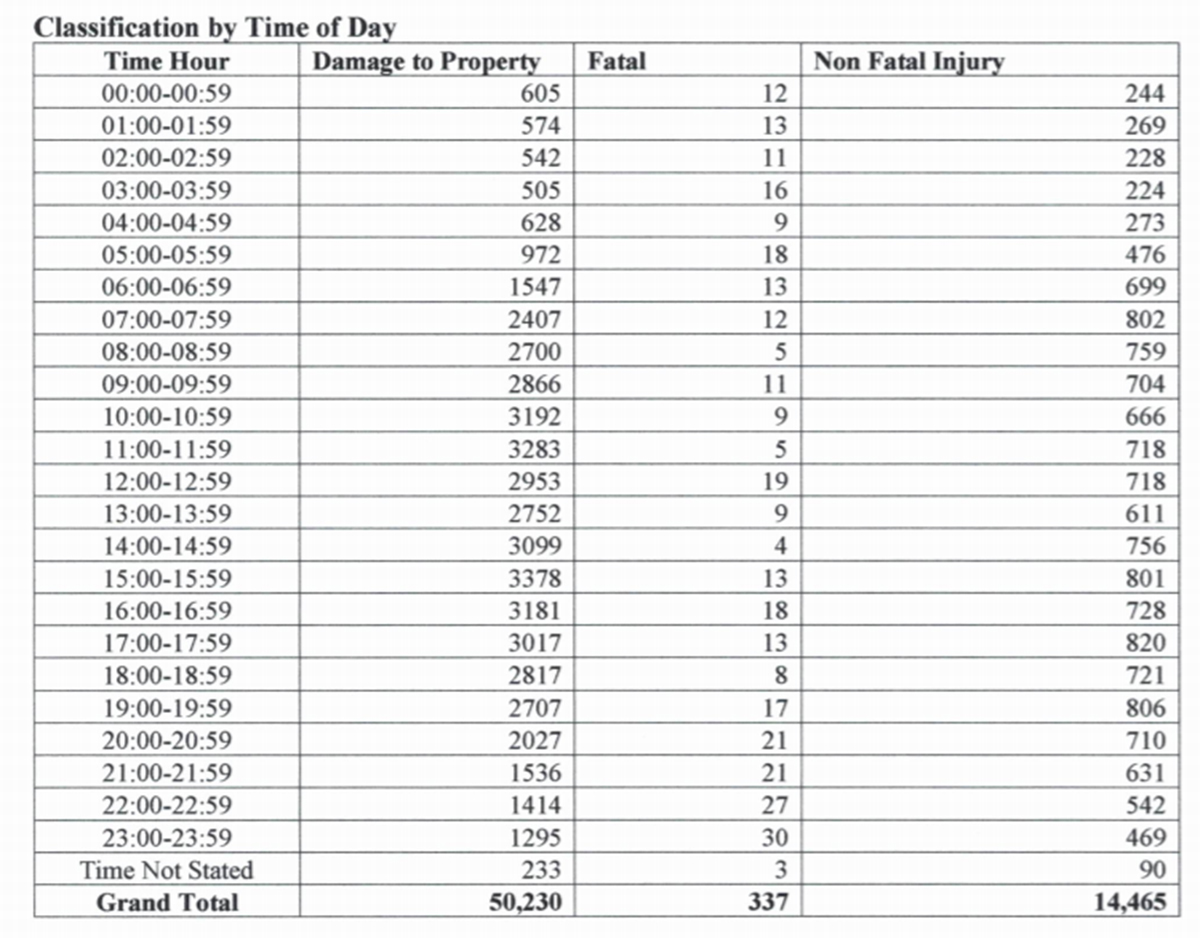 “In contrast, only a total of 83 fatal incidents occurred during those hours in 2019. Also worth noting is that while there was a slight dip in fatal road incidents in 2020 (337) compared with 2019 (372), the percentage of deadly crashes actually rose when you take into account the overall number of recorded incidents.

“The number of motorcycle-related fatalities in Metro Manila increased slightly in 2020, despite the presence of government checkpoints at the height of the COVID-19 pandemic, as more people shifted to two-wheelers due to limited public-transport availability and physical-distancing requirements. 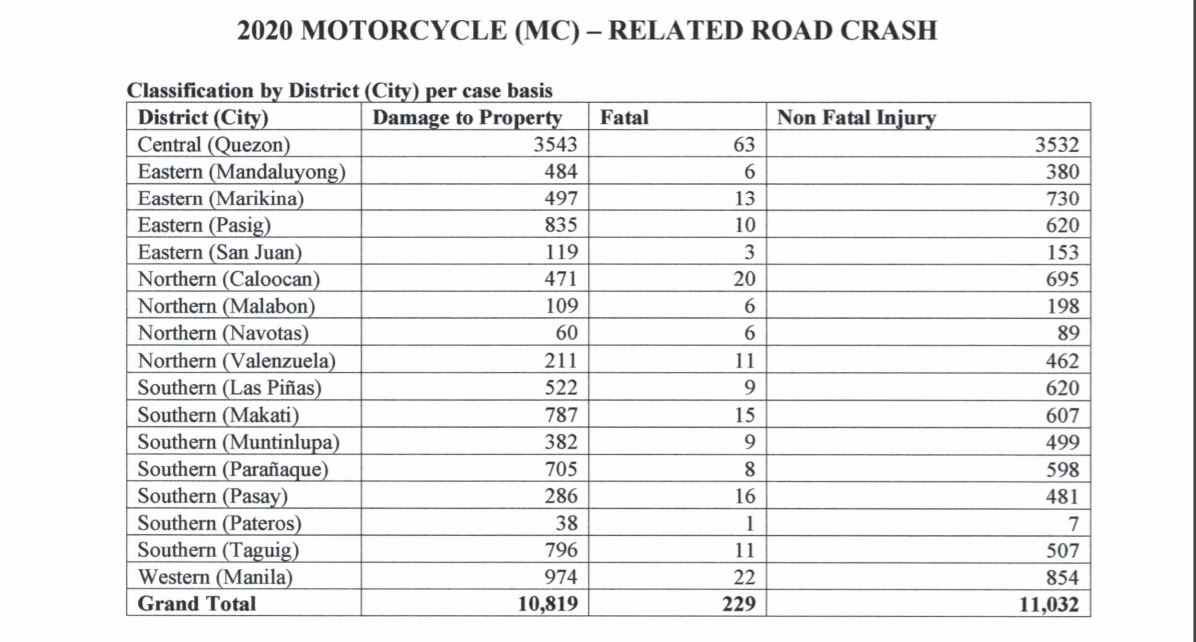 “The actual number of persons involved in motorcycle-related accidents are as follows:

“According to the report, the highest number of deaths from motorcycle accidents occurred from 8pm to 9pm and from 10pm to 11pm. During both time periods, 17 fatalities were recorded. Side swipes caused the most damage to property (3,420) and injuries (2,842), while collisions with objects resulted in the most fatalities (41). ”

On a related note, bicycle-related incidents and fatalities were also up in 2020. Full story here.

“The Department of Public Works and Highways (DPWH) recently conducted an inspection of the ongoing Skyway Extension Project, and confirmed that the northbound portion of the elevated expressway will be opened in the second quarter of 2021.

“‘We are targeting completion of the northbound segment second quarter of this year while the southbound segment is being fast-tracked for delivery in September as part of our goal,’ said DPWH secretary Mark Villar.

“The project was set to be partially completed in December 2020 despite the COVID-19 pandemic, but a mishap back in November caused San Miguel Corporation (SMC) to make some further adjustments to its schedule. Nevertheless, it looks like we’ll finally be able to see this porton of the Skyway operational soon.

“‘With 61% of the project already complete, travel time from the Skyway main line toll plaza in Sucat, Parañaque, to Susana Heights in SLEX will soon be reduced by around 50%, greatly easing the traffic situation for those who are going home to the provinces,’ said Villar.

“Once the entire Skyway Extension Project is complete, three northbound lanes and two southbound lanes will be added to the southern portion of the existing Skyway network. The extension is expected to easethe usual traffic buildup near the Alabang interchange of the South Luzon Expressway (SLEX), a problem that has riddled motorists for quite some time now.

“In addition, SMC estimates that this project along with the recently opened Skyway Stage 3 will reduce travel time between SLEX and the North Luzon Expressway (NLEX) to just 30 minutes.” 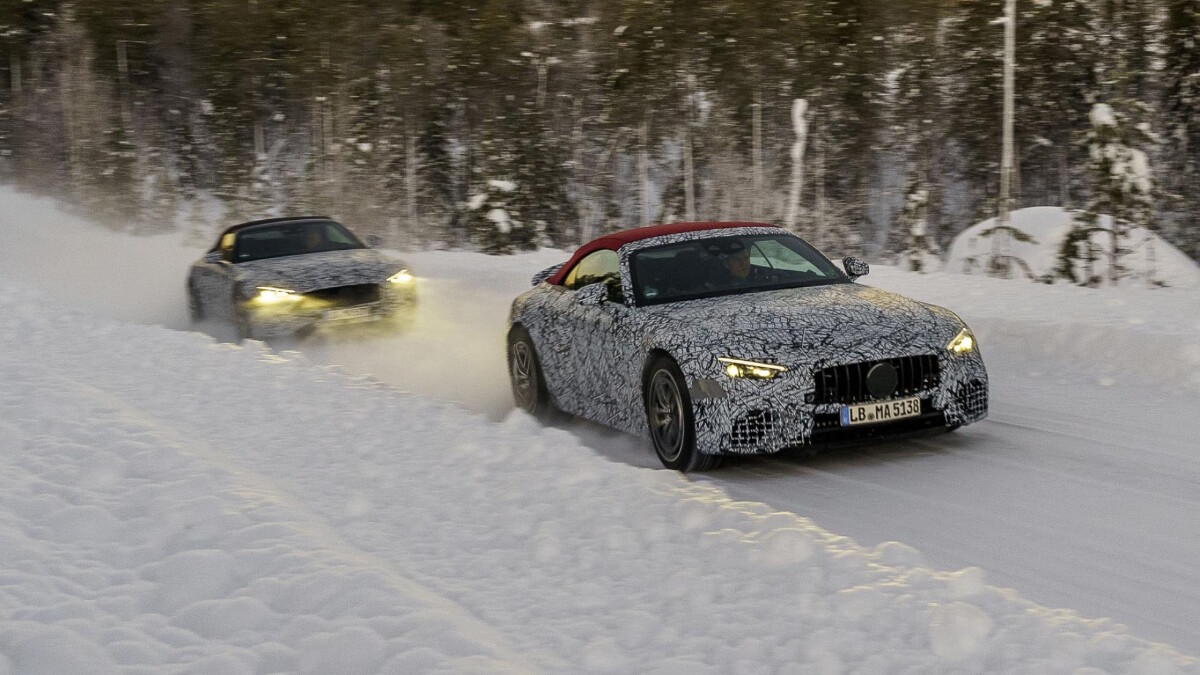 Merc-AMG is giving the SL Roadster’s 4WD system a proper test in the snow
View other articles about:
Recommended Videos
Read the Story →
This article originally appeared on Topgear.com. Minor edits have been made by the TopGear.com.ph editors.
Share:
Retake this Poll
Quiz Results
Share:
Take this Quiz Again
TGP Rating:
/20