And the shift to cashless tollways? It’s been suspended indefinitely. Yep...
by TopGear.com.ph | Jan 17, 2021

Abalos has the following on his agenda as new MMDA head

“The Metropolitan Manila Development Authority’s (MMDA) new chairman is off to a running start.

“Benhur Abalos has bared the changes that he plans to make on EDSA during his first day on the job. In a meeting with agency officials, the former Mandaluyong City mayor discussed issues such as the COVID-19 pandemic and traffic plans for the country’s busiest thoroughfare.

“According to Abalos, number one on the agency’s list of priorities is continuing to address the COVID-19 pandemic in cooperation with relevant government bodies. ‘Top on the list is the authority’s continuous efforts in mitigating the effects of the pandemic,’ he said. ‘We will focus on coordination with the authorities and local government units especially since the vaccine is underway.’

“In addition, he revealed his plan to discuss the EDSA Busway with Department of Transportation (DOTr) head Arthur Tugade, and said that the opening of Skyway Stage 3 should alleviate EDSA traffic by a considerable amount. Abalos also revived talks about implementing elevated busways to address EDSA’s U-turn issues and added that moving the motorcycle lane to the rightmost side of the highway is on the table.

Did you experience heavier traffic along EDSA-Balintawak this past week?

The MMDA greeted 2021 with the closure of yet another U-turn slot along EDSA.

“The agency closed the U-turn slot near General Malvar/Bagong Barrio on Monday, January 11. This is the same U-turn slot that was initially scheduled to close on December 3 last year, but was postponed to January 4. Motorists looking to use this U-turn slot are advised to take the Monumento Cloverleaf or the Balintawak Cloverleaf routes instead.

“This is only one of the many U-turn-slot closures that the MMDA has announced over the past few months. All of these were done to make way for the MMDA’s EDSA Busway, the dedicated bus lane on the innermost lane of EDSA.”

We’re in the top 10 again...of countries with the worst traffic congestion

“Last year, as soon as the COVID-19 enhanced community quarantine was lifted and cities started reopening their borders, it felt like just another day at the office along EDSA. And for the most part of 2020, that was the case.

“Don’t take our word for it. Crowdsourced global statistics database Numbeo’s 2020 traffic index showed that traffic in the Philippines was the worst among ASEAN countries and ninth-worst in the world last year.

“The higher the score in the traffic index, the worse the traffic situation is in the country. And according to Numbeo’s report, the Philippines finished the past year with a traffic index score of 198.41. As mentioned, this is ninth highest across the world and the highest among ASEAN countries.

“Among the 81 countries, Austria finished at the bottom. That means traffic is good in those parts, and we can only imagine how relaxing it would be to drive in roads like those. Anyway, if you want to see the list, you can click these blue words. We’ve also listed down below the top 10 countries with the highest traffic index scores in Numbeo’s report.”

So, who didn’t see this coming?

“For months, motorists and tollway operators alike found themselves scrambling to meet the deadlines set by the DOTr and the Toll Regulatory Board (TRB) for the shift to 100% cashless tollway transactions—only to see the said deadlines postponed over and over. And now, guess what? The TRB has moved the January 11 deadline yet again.

“According to a report by PhilStar.com, the TRB will be extending this transition period ‘until further notice.’ This means that cash payments will still be accepted at all expressways, and motorists without RFIDs who intend to use these tollways will not be apprehended, contrary to what the DOTr said in its previous statements.

“The TRB also said that this extension was made to give more time to motorists who have yet to secure their RFIDs as well as to toll operators who need to address the flaws of their cashless toll-collection systems. However, as implied earlier, the TRB has yet to provide a specific timeline for this so we’ve no idea when cash transactions will finally be obsolete.”

Remember that ‘Makati to Cubao in five minutes’ thing? It’s still a thing

“Department of Public Works and Highways (DPWH) head Mark Villar recently shared a portion of a press conference on social media, giving an update on the government’s EDSA decongestion program and confirming to reporters that president Rodrigo Duterte’s promise of a Makati to Cubao travel time of just five minutes will be possible ‘very soon.’

On a related note, Skyway Stage 3 became fully operational on January 15. It remains toll-free until January 29.

“SMC is now setting its sights on completing the Pasig River Expressway (PAREX).

“‘We will continue work to further decongest Metro Manila by linking east and west of the metropolis, through the Pasig River Expressway project,’ said SMC president and CEO Ramon S. Ang.

“PAREX is a 19.4km, six-lane elevated expressway that will be built along the banks of Pasig River, and will connect C5, EDSA, and the R-10 road in Manila. This will help decongest Rizal, Cainta, and Marikina, and will provide easier access to the central business districts of Makati City, Ortigas, and Bonifacio Global City.

“The project’s massive budget also includes the rehabilitation of the infamous river, not just the building of an elevated expressway. SMC intends to dredge the riverbed to ‘remove decades of debris and garbage.’

Finally, the MRT-3 has its own contact-tracing app

“The DOTr will be launching a new contact tracing app for the rail line on January 18 called MRT-3 Trace. This will utilize a QR code, and will replace the pen-and-paper setup that stations are currently using.

“Registering is simple enough: Just visit trace.dotrmrt3.gov.ph, fill out the necessary information (date of birth, full name, contact number, and so on), and download the app on your smartphone. Users must scan unique QR codes at designated areas of each MRT-3 station, then show their verification code to personnel prior to entering.

“No smartphone? The DOTr says the option to manually fill out health declaration forms will still be available.

“While the app will already be available to use on January 18, the new procedure’s full implementation is schedule some time away in February 2021. The agency says this is to give commuters enough time to familiarize themselves with the new app and contact-tracing process.”

SFEX remains passable during certain hours of the day

“The Subic Freeport Expressway (SFEX) will now remain open from 6am to 6pm every day until the project’s completion next month. Prior to this, SFEX was scheduled to once again be closed to traffic on January 15, after being operational over the holidays.

“In a statement, DPWH head Mark Villar said this adjustment will allow construction to resume with minimal effect on local businesses: ‘With this, we can continue providing faster and safer access to and from Subic especially for businesses and logistics companies operating in the area as well for tourists.’

“NLEX Corporation president and general manager Luigi Bautista, meanwhile, assured the public that travel on SFEX will be safe despite the ongoing construction.

“So far, more than 95,000 motorists have been served by SFEX since it partially opened in December 2020.”

It’s good to hear rural areas getting their fair share of new infra, too

“The DPWH has announced that Sibut Bridge in Rizal, Nueva Ecija, is now open to the public. The bridge cost a total of P240 million to build, spans 240 meters, and is expected to shorten travel time from San Jose City to Rizal.

“DPWH head Mark Villar shared that prior to Sibut Bridge’s completion, motorists would have to travel for an hour and 15 minutes to and from Rizal to San Jose City. This was because the previous structure was dilapidated and cars would need to be rerouted whenever the area experienced inclement weather.

“‘Now that the Sibut Bridge is open to all types of vehicles, it should help spur the local economy and provide ease of travel between San Jose City and the town of Rizal here in Nueva Ecija,’ Villar said. ‘Good news is that through this bridge, travel time is now cut to only 30 minutes.’”

“The Cebu City local government is updating the city’s old traffic-light system for the first time in three decades.

“According to a report by PhilStar.com, the LGU is now in the process of installing modern, fully-digitalized traffic lights at 18 intersections as part of the first phase of its project. Cebu City Transportation Office (CCTO) officer-in-charge Lyntoni Sable reportedly said in an interview that the project is now 60% complete.

“The CCTO does not expect the new traffic lights to solve the traffic problem in Cebu City, but these are expected to reduce the number of traffic-related accidents, ‘especially those that involve beating the red light.’

“There will also be high-definition cameras installed at the intersections, which will add to security in those areas. As of this writing, the new traffic light system has already been installed around the area of P. del Rosario Street to N. Bacalso Avenue, and the vicinity of SM City Cebu at the North Reclamation area.

“The CCTO is looking to finish the installation of the new traffic lights in all major intersections in the city within the next six months.” 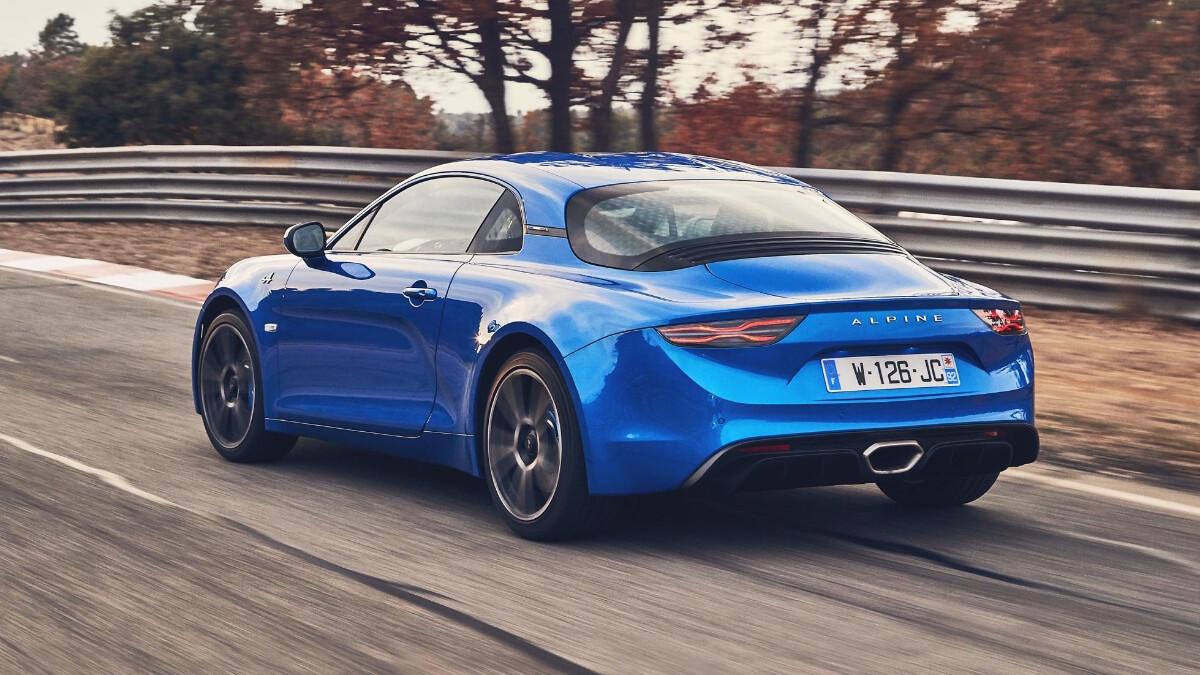 Alpine and Lotus are building an electric sports car—how light can they make it?
View other articles about:
Read the Story →
This article originally appeared on Topgear.com. Minor edits have been made by the TopGear.com.ph editors.
Share:
Retake this Poll
Quiz Results
Share:
Take this Quiz Again
TGP Rating:
/20