A pretty slow week considering how the month had kicked off
by TopGear.com.ph | Feb 21, 2021

“After exposing some of their alleged unfair business practices, like the delayed release of registration papers and license plates, Senator Richard Gordon has raised another alarming issue: the practice of selling motorcycle units solely through financing packages with a 5% monthly interest rate.

“‘Bakit ayaw ninyong tumanggap ng cash kahit gusto ng buyer [to pay in cash]?’ Gordon asked the dealers during the most recent Senate Blue Ribbon Committee hearing on February 15. He also presented videos of motorcycle owners whose units were arbitrarily retrieved from their possession due to their failure to pay monthy installments.

“The senator likewise berated the dealers for forcing buyers to sign a promissory note granting dealerships the authority to repossess units without due process. Based on reports reaching his office, he claimed that the dealers offer these repossessed units as demo bikes to prospective buyers to maintain a good price point. In addition, he questioned the dealers’ alleged practice of holding on to the original copy of a motorcycle’s official receipt (OR) and certificate of registration (CR) until all the monthly payments have been completed.

“Of the 3,060 complaints filed before the Department of Trade and Industry (DTI) related to motorcycle sales, 287 have been resolved, according to agency secretary Ramon Lopez. The penalties for unfair motorcycles sales practice ranges from P500 to P10,000. Gordon is now seeking stiffer fines to curb the problem.

“Owners and representatives from six motorcycle dealerships—Du Ek Sam, DES Marketing, DES Strong Motors, Desmark Corporation, Premio Corporation, and Motortrade Nationwide Corporation—attended the hearing. The meeting’s objective was to look into discrepancies in the implementation of Republic Act No. 11235, otherwise known as the Motorcycle Crime Prevention Act. None of the dealers’ representives were allowed to air their side during the Senate probe, which lasted for almost three hours.”

Confirmed: You may go to either a PMVIC or a PETC for pre-registration checks

“Malacañang made headlines two weeks ago when it announced that President Rodrigo Duterte had declared that the new Motor Vehicle Inspection System (MVIS) of the Land Transportation Office (LTO) should no longer be mandatory.

“Of course, we all had questions following the big announcement: Do we still need to go to a private motor vehicle inspection center (PMVIC)? Or will having our cars inspected at a private emission testing center (PETC) be just fine?

“In a recent press briefing, presidential spokesperson Harry Roque confirmed that car owners have the option to go to either. That means you’ll be able to renew your car’s registration as long as you bring your vehicle to a PMVIC or a PETC, but there’s no need to go to both.

“Now, you might be thinking: ‘Why would I even want to spend extra at a PMVIC?’ Well, the Department of Transportation and the LTO have already agreed to lower the testing fees at PMVICs. The Vehicle Inspection Center Operators Association of the Philippines (VICOAP) has also released a statement on how PMVICs will be operating at a loss because of this. The new prices are still subject to change, but it’s a good start.”

“In a statement, MRT-3 management acknowledged that the mother of one of its employees had indeed caught the new COVID-19 strain, but clarified that the employee did not test positive for the virus following multiple swab tests.

“‘Upon learning on 13 February from the [Department of Health] and [Department of the Interior and Local Government] contact tracer that his mother had tested positive for the UK variant, the MRT-3 employee and two other members of his family underwent a re-swab yesterday, 14 February,’ MRT-3 management said.

“‘Their tests all yielded negative results. His mother has also been released from the quarantine facility on 6 February after completing the required quarantine period, and is now fully recovered.’”

“Another drive-through COVID-19 testing center has popped up, this time in Araneta City. The drive-through site is located at the Araneta City bus port along General Romulo Avenue in front of Ali Mall. It will be operational from 9am to 5pm until August 2021, and appointments may be booked via 143.redcross.org.ph.

“A test costs P2,000, and the entire procedure is pretty straightforward once you schedule an appointment. Just make sure to check for a confirmation email from the Philippine Red Cross before leaving for the site. After the procedure, all you need to do is wait for your results, which will also be sent via email.

“San Miguel Corporation (SMC) has announced that it will comply with the three-strike policy against RFID users who pass through express lanes with insufficient load in their accounts, if and when the Toll Regulatory Board decides to roll out the scheme. In fact, SMC president and COO Ramon S. Ang mentioned in a statement that the RFID system in place on SMC-operated tollways is already capable of monitoring repeat offenders.

“Likewise, SMC is reminding all motorists that they can reload their Autosweep accounts at toll plazas or through online systems such as GCash, PayMaya, and several banking apps. Over-the-counter reloading is also available at retail outlets and convenience stores like Robinsons Supermarkets, Petron Treats, and 7-Eleven.

“‘With all these efforts, I hope our motorists will find it much easier to comply with government mandate and shift to the much safer and faster system of electronic toll collection,’ Ang said. ‘We will continue to work to make necessary adjustments and improvements to support government initiatives and ensure that motorists will have better, safer journeys on our expressways.’”

“SMC has been conducting a massive cleanup of the Tullahan-Tinajeros river system for quite a while now. The past week, the company announced that it had moved its operations further upstream, extending the total reach of the cleanup to 11.5km.

“SMC said that it had been told by the Department of Public Works and Highways (DPWH) to also widen some portions of the river, in addition to cleaning it and increasing its depth.

“The company is looking to dredge about 1.5 million cubic meters of silty sand and solid waste for the five sectors of the river system. It also plans on rehabilitating Pasig River as part of its Pasig River Expressway project.”

“The southbound Alabang toll plaza has been temporarily closed since midnight of February 20, 2021, to make way for Skyway construction activities.

“SMC says the closure is in line with the company’s move to expedite work on the Skyway Extension Project. ‘There is no way of getting around this key stage in construction,’ Ang explained. ‘We really have to do it. It will be a temporary inconvenience, but I promise you, the benefits—eliminating traffic and providing seamless travel—will be well worth it.’

“SMC has released information on alternate routes to keep traffic flowing smoothly during the closure.

“‘We’re again appealing for patience and understanding from our motorists in the south and residents in the area, for any delays that they may experience, as we work to complete the Skyway Extension. We’ve put in place measures to help mitigate the impact on you and to ensure safety,’ Ang said.”

Up north, work on the SFEX expansion has wrapped up

The NLEX Corporation and the Department of Public Works and Highways (DPWH) have announced that the Subic Freeport Expressway (SFEX) expansion project, which cost P1.6 billion to build and spans 8.2km, is now 100% finished. Motorists can expect a safer and more convenient time traveling to Subic thanks to dedicated lanes, a new tunnel, and bright new LED lights.

“SFEX was already opened to the public back in December 2020, but at the time, some construction activities were still ongoing. With the road’s completion, the DPWH says it will be able to accommodate around 10,000 motorists per day and will help boost the economy during the COVID-19 pandemic.

“‘We continued the construction of the new expressway despite the challenges posed by the pandemic and the stringent health protocols. The construction project also provided jobs and supported the livelihood of our people,’ NLEX Corporation president Luigi Bautista said in a statement.

“‘It was also our way of helping our countrymen manage the economic impact of the health crisis. [Metro Pacific Tollways Corporation] and NLEX continue to stand with the government in its commitment to improve the lives of Filipinos through infrastructure projects such as this.’”

“In a statement, SMC shared that the privately funded MRT-7 project is set to open in December 2022. While that might still be a while off, progress appears to be going steady as the new rail line is already 54% complete.

“‘We have already completed a significant amount of civil works, including the installation of bored piles, girders, foundational works on stations, and we have been installing rails or tracks,’ SMC president and COO Ramon S. Ang said.

“Ang also compared the task at hand to the recently finished Skyway Stage 3, saying that while the elevated expressway is definitely one of the biggest challenges SMC has ever taken on, the MRT-7 project is actually ‘more complex’ and ‘involves a lot of mechanical and electrical work. There are so many systems to be integrated to ensure we can efficiently and safely run a large number of passenger trains to serve the public,’ he explained, adding that work on the rail line continues at a steady pace despite the ongoing pandemic.

“One of the milestones set to be passed in the near future is the testing of trains SMC has purchased from South Korea Hyundai Rotem. If everything goes as planned, the trains should pass the testing phase and the first batch will arrive in the Philippines within 2021. A total of 36 trains and 108 cars are expected, and SMC says its depot will be capable of holding up to 150 trains if further expansion becomes necessary.

“Ticket vending machines and automated gates are also scheduled for testing within the year, while testing of communications equipment has already been finished. What’s more, SMC is expecting to take delivery of signaling and power-supply systems throughout the year.

“‘Given our progress today, and all the major milestones we’re expecting this year and the next, I think we’re confident we can achieve full, complete operations by December next year, with our first test run scheduled for June next year,’ Ang shared.

“‘By then, I believe we would be recovering already from the impacts of COVID-19. Our economy will be on the way up, and people will be resuming their lives in the next normal. MRT-7 will be ready for them, to help make commutes faster, to boost our economy, and bring growth to more areas.’”

“Robinsons Malls has put up bicycle parking and repair stations in 47 of its branches to cater to the growing number of people who travel on two wheels.

“Through a campaign led by actress Maja Salvador and a local bike group, the Gokongwei-led mall operator wants the public to know that it is a ‘bike-friendly mall that is safe and convenient for bikers.’

“‘We saw some shift in lifestyle in 2020 and we saw how the pandemic has created a new momentum for biking, appreciation of nature and outdoor places,’ Robinsons Malls said in a statement.

“To officially launch its cyclist-friendly amenities, it has created the Bike Challenge video, directed by Emmy Award-winning producer Mike Carandang. Check it out here.” 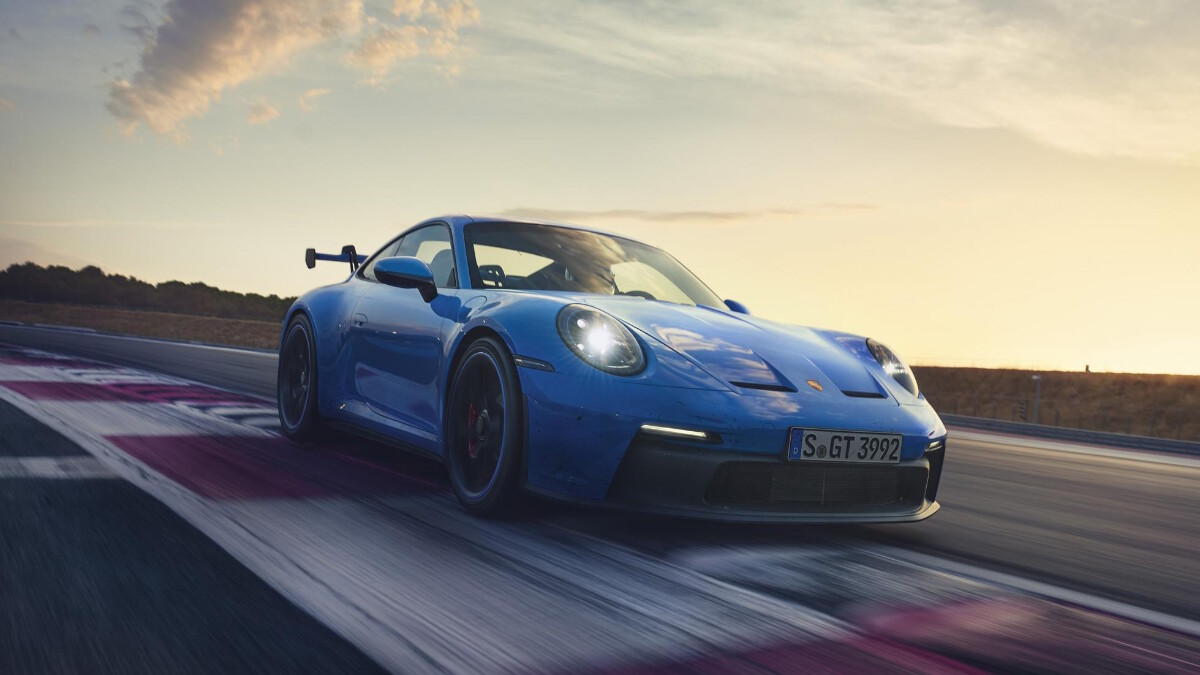 Porsche believes synthetic fuels could be the key to saving its nat-asp models
View other articles about:
Recommended Videos
Read the Story →
This article originally appeared on Topgear.com. Minor edits have been made by the TopGear.com.ph editors.
Share:
Retake this Poll
Quiz Results
Share:
Take this Quiz Again
TGP Rating:
/20