Here’s the latest update on the LRT-1 Cavite Extension

“It’s been almost two years since the Department of Transportation (DOTr) announced the start of construction of the LRT-1 Cavite Extension Project. Now, the agency has shared in a recent statement that the ‘Partial Operability Section’ until the supposed Sucat Station is halfway finished, and that the project’s overall progress rate as of December 31, 2020, is already at 50.61%.

“This extension of the existing 20.7km LRT-1 line will increase the train network’s capacity from 300,000 to 800,000 passengers daily. It will also reduce travel time between Baclaran in Manila and Bacoor in Cavite from over one hour to just 25 minutes.

“Once completed, this new 11.7km extension will add several stations leading to the new Niyog Station endpoint in Cavite, and it will also expand the LRT-1’s existing depot at the Baclaran Station. The DOTr says that partial operations are expected by the end of 2021.”

After more than a year, the full LRT-2 line is up and running again

“The LRT-2 officially resumed full-line operations as of January 22, 2021, more than a full year since the fire incident that initially caused the closure of the Anonas, Katipunan, and Santolan stations.

“In a previous statement, however, the Light Rail Transit Authority requested commuters to allot a longer travel time as the trains will operate under a 30kph speed restriction between the three newly reopened stations. Travel time from Santolan to Recto will supposedly take more than 35 minutes, or about seven minutes longer than usual.

“The agency also said that it will be deploying more trains along the line soon to increase the total capacity and reduce the current headway for commuters.”

These are the proposed toll fees for the Skyway Stage 3

“The Toll Regulatory Board (TRB) recently published on its website a document containing the proposed toll fees along the Skyway Stage 3, which currently offers toll-free passage until January 29, 2021. According to the said document, the toll rates will range from P110 to P274, inclusive of VAT.

“For a better look, check out the TRB’s table below.

*available ramps as of December 2020

“Take note that these are just the proposed toll fees, so nothing is official yet as of this writing.”

Also, if you’re a medical frontliner, you will be granted toll-free usage of Skyway Stage 3—and of other SMC-operated tollways—until further notice.

China will fund the P45-B railway connecting Subic and Clark

“The Chinese Embassy in Manila and Chinese Ambassador to the Philippines Huang Xilian recently confirmed that the People’s Republic has inked a contract to fund the $940 million (about P45 billion) railway project that will connect the two former US military bases in Subic and Clark.

“‘Our cooperation continues! China and the Philippines just signed the commercial contract for the Subic-Clark railway project. This is so far the highest-funded G2G project between the two countries valued at approx. $940 million and is the flagship project under the administration’s Build, Build, Build program,’ said the ambassador in his official Facebook post.

“The 71km railway will link the Subic Bay Freeport Zone and Clark International Airport. It will also connect to the Department of Transportation’s North-South Commuter Railway.”

MMDA gets backup from the PNP-HPG for EDSA, Commonwealth traffic management

“Barely a week after announcing the forced retirement of senior traffic personnel, the leadership of the Metropolitan Manila Development Authority (MMDA) has arranged for the deployment of Philippine National Police–Highway Patrol Group (PNP-HPG) riders along EDSA and Commonwealth Avenue to assist with traffic management.

“In his meeting with HPG-NCR chief Col. Joshua Alejandro, MMDA chairman Benhur Abalos cited the shortage of traffic enforcers on EDSA and Commonwealth Avenue. These two major thoroughfares are considered ‘traffic discipline zones’ by the agency. Alejandro pledged a total of 180 PNP-HPG riders as part of the augmentation team.

“Abalos assured that his team has intensified the recruitment process for additional traffic personnel to fill the vacancies left by the forced retirements. He expects the hiring process to be completed within three months. ‘To provide economic relief and for humanitarian consideration, we will allow relatives of said traffic enforcers, who are senior citizens, to apply and submit their applications, provided that they will be able to pass the examination and training requirements,’ Abalos added.

“Currently, the MMDA has 2,187 enforcers, of which 25% are senior citizens, manning Metro Manila’s major thoroughfares. Teroy Taguinod, the MMDA’s Traffic Discipline Office head, stressed that those most vulnerable among their ranks, including senior citizens, pregnant women, and those with existing medical conditions, are exempted from reporting to work due to the ongoing pandemic.”

“In a recent meeting with the Department of Public Works and Highways (DPWH), MMDA chairman Benhur Abalos requested the agency to improve lighting along major thoroughfares across the metro.

“‘Public safety is our utmost priority. Only one busted or broken light would endanger lives,’ said Abalos. ‘Without the street lights, our motorists and commuters are in danger. Part of road safety is making the road visible to all its users.’

“The DPWH, for its part, agreed to fix all street lights along major roads within 10 days and turn everything over to the MMDA. DPWH undersecretary Robert Bernardo added that the agency will shoulder the electric bill of all covered road lights until the official turnover to the MMDA.

“Bernardo, however, mentioned the risk of losing these improved street lights to thieves, especially for electrical fixtures in tunnels and underpasses. He appealed for inter-agency collaboration in order to ensure proper maintenance of the street lights in the years to come.”

Over or under: Do you always take the EDSA-Mandaluyong underpass?

“In a Facebook post, MMDA traffic chief Bong Nebrija observed that the reason for the bottleneck near the EDSA–Shaw Boulevard underpass is motorists from the outer lanes trying to squeeze their way into the underpass instead of heading straight through onto the service road.

As of this month, 17 PMVICs are now operational across the country

“By now, you’ve probably heard about the new Motor Vehicle Inspection System (MVIS) being implemented by the Land Transportation Office (LTO). And most likely, you’re also asking how many private motor vehicle inspection centers (PMVICs) are already operational, and where they’re located.

“Based on the list we got from an insider, there are currently 17 operational PMVICs that assess light vehicles, motorcycles, and tricycles for roadworthiness under the MVIS. The government previously announced its plans to erect 138 PMVICs in different parts of the country.

“Our source claims the number could grow bigger to better accommodate the huge population of vehicles in the country. ‘There is a phase for an additional 200-plus (PMVICs), but still waiting for guidelines and opening of application for that,’ the source added.

List of operational PMVICs in Luzon as of January 2021

List of operational PMVICs in Visayas as of January 2021

“The list given to us cites 73 PMVICs listed under the DOTr. The non-operational ones, including facilities in Mindanao, are either undergoing test runs or installing the necessary equipment.”

PMVIC testing operations, however, are now under scrutiny

“Rene Romero, a known business leader from Pampanga, is pushing for an investigation on alleged questionable testing procedures and overcharging by PMVICs after his vehicle failed the roadworthiness test.

“On January 11, his driver brought his 2011 BMW Z4 to QWIK Private Motor Vehicle Inspection Center as part of its registration renewal process with the LTO. Romero claims his Z4 is casa-maintained and well-preserved after logging some 7,000km. While mounting a new set of tires, Romero also checked the Z4’s underchassis to make sure that it’s in good condition prior to undergoing the new MVIS testing procedure.

“After paying the P1,800 for the testing fee, his driver was handed a queue number (#85) at the facility around 9am in the morning. It took three hours before technicians started the roadworthiness inspection on the Z4.

“‘Nagulat na lang ako when my driver called me, telling me that my car failed in the testing procedure,’ Romero related.

“Disappointed, he immediately took his car to the BMW dealership in San Fernando, Pampanga, to check on the brake system. But after a thorough inspection, the BMW mechanics did not find anything amiss.

“Romero kept a copy of the inspection result from the BMW dealership. He was able to return to QWIK on January 15 to have his Z4 re-inspected, which cost him another P900. This time, he said, it was the facility’s manager who drove the vehicle to the inspection bay. It got a passing mark.

“Romero then tried talking to the management of QWIK about the inconsistency in the testing process, to no avail. When he started posting about his experience on social media, similar stories from other motorists poured in.

“Nevertheless, Romero emphasized that he respects the government’s policy to rid the streets of unsafe vehicles by checking for roadworthiness. He is currently collating statements and documents from other motorists, mostly from Pampanga, in a bid to open an investigation on the issue.”

Meanwhile, the facility’s manager has responded to Romero’s allegations, saying, among other things, that no retesting fee was charged, and the Z4’s brake system could have been repaired in between the two test runs. Read the full story here. 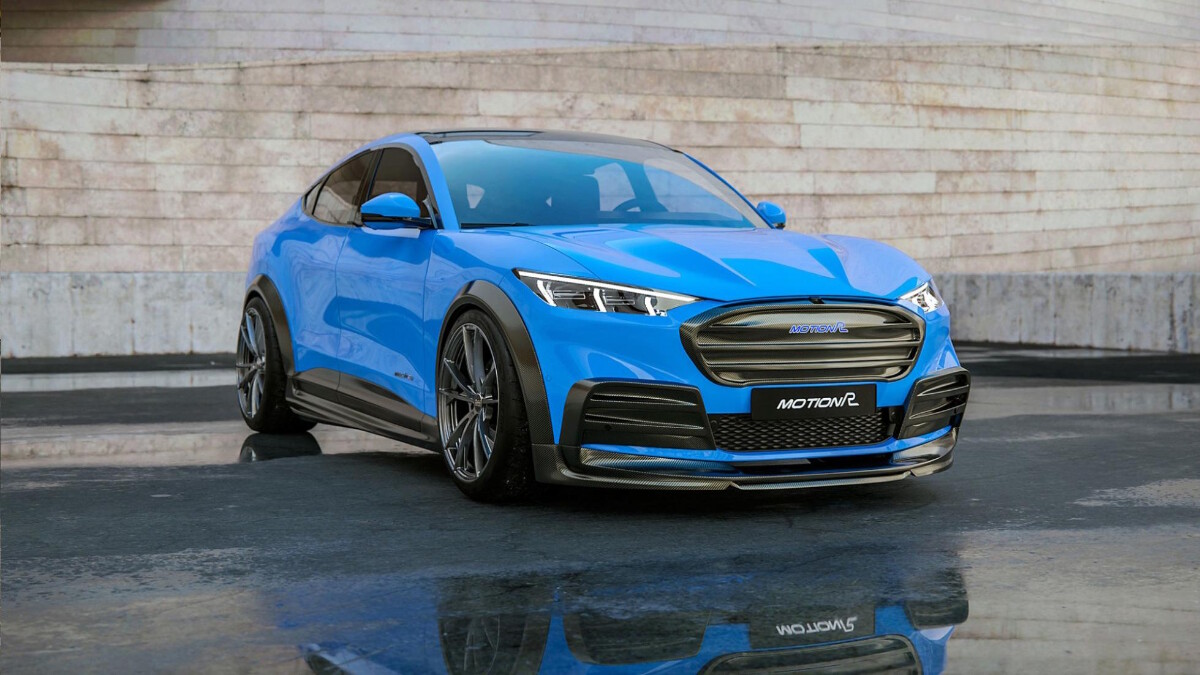 The Ford Mustang Mach-E continues to attract the attention of tuners
View other articles about:
Read the Story →
This article originally appeared on Topgear.com. Minor edits have been made by the TopGear.com.ph editors.
Share:
Retake this Poll
Quiz Results
Share:
Take this Quiz Again
TGP Rating:
/20