Also, will we soon see more drive-through vaccination sites?
by TopGear.com.ph | May 22, 2021

“North Luzon Expressway (NLEX) regulars, take note: You now have to shell out more in toll fees after the Toll Regulatory Board (TRB) authorized the NLEX Corporation to implement a 2-3% toll increase on the thoroughfare, effective May 18.

“Class 1 vehicles have to pay P2 more in the open system (flat rate is charged per entry), VAT included, and P6 more to use NLEX from end to end. Class 2 and 3 vehicles must pay an additional P3 and P4 in the open system, respectively, and P14 and P16 for end-to-end travel.

“In a statement, the NLEX Corporation explained that this toll increase is actually several years in the making, as it is part of approved adjustments that were due in 2012 and 2014.”

Except in Makati City, number coding is still suspended

“Number coding is still suspended in most of Metro Manila despite the recent shift to general community quarantine (GCQ) with heightened restrictions. According to the Metropolitan Manila Development Authority (MMDA), the number-coding scheme will remain suspended until further notice.

“This doesn’t apply across the capital, though. In Makati City, a modified number-coding scheme is now in effect, except during weekends and holidays. Under this scheme, only motorcycles, diplomatic vehicles, government and emergency vehicles, and cars with Makati City seniors as passengers are exempted.”

“Reaching the EDSA Busway stops may soon be a whole lot easier for countless Metro Manila commuters now that three new concourses along the major thoroughfare are being built.

“The Department of Transportation (DOTr) held the groundbreaking ceremony for the EDSA Busway Concourse Project last week at SM North EDSA, SM Megamall, and SM Mall of Asia, marking the beginning of civil works at the three sites. This project is in partnership with SM Prime Holdings (SMPHI), which has donated the spaces these concourses will sit on.

“The DOTr says these facilities will come equipped with ticketing booths, an automated fare collection system, turnstiles, and concierges.

“‘In addition to funding the construction of these concourses, SM will ensure that these facilities are properly secured and well-maintained for the safety and convenience of all passengers and pedestrians,’ said SMPHI president Jeffrey Lim said.

Starting tomorrow, the uniform light truck ban will be implemented on EDSA

“The MMDA resumed implementing its truck ban in Metro Manila on May 17. This meant trucks are not allowed to traverse all thoroughfares under the MMDA’s jurisdiction from 6am to 10am and from 5pm to 10pm, Mondays to Saturdays.

“The policy along EDSA, however, is slightly different. According to the previous announcement, a total truck ban will be enforced along the avenue—this will cover the entire stretch from the Magallanes Interchange in Makati City to North Avenue in Quezon City, and will be in effect 24/7. Only trucks carrying perishable and agricultural goods are exempted.

“Now, the MMDA has announced that the uniform light truck ban along EDSA and Shaw Boulevard will also be reimposed starting Monday, May 24. This means that all trucks with a gross capacity weight of 4,500kg and below are prohibited to use the aforementioned portion of EDSA from 5am to 9pm, and the entirety of Shaw Boulevard (Mandaluyong City and Pasig City) from 6am to 10am and from 5pm to 10pm.

“The ban will be enforced from Mondays to Saturdays, excluding holidays. Violation will result in a P2,000 fine.”

“The Quezon City government has recently provided jabs for residents of Barangay Pasong Putik via a drive-through vaccination site set up at the SM City Fairview carpark. More than 100 people from Categories A1 to A3 were successfully inoculated in one day.

“No specific details were discussed, but the photos suggest that the process is very straightforward. People were screened upon entry before receiving the jabs, then were monitored post-vaccination. All of these were done without the vaccine recipients having to step outside their vehicles.”

If you are qualified for vaccination and would like to book a slot at this drive-through site, monitor the LGU’s social-media accounts for updates on open slots and details on how to make a booking.

“Last week, Quezon City’ voluntary bike registration program was launched through the city government’s Department of Public Order and Safety-Green Transport Office (DPOS-GTO). According to the LGU, the program will help residents locate their bicycles in case of loss or theft, and will also allow authorities to better assist them in the event of an accident.

“‘The importance of this bike registration program is to help our bikers in case their bicycles cannot be located or are stolen,’ said DPOS head PBGen. Elmo San Diego. ‘We can aid them and they can avail of the assistance of the police in investigating missing bikes because the owners can readily present a certificate of ownership issued by DPOS.’

“The registration is available for cyclists and users of active transport. The requirements are:

“All registrants will be issued a sticker by the DPOS-GTO.”

“The Land Transportation Franchising and Regulatory Board (LTFRB) is now enforcing the use of the Safe, Swift, and Smart Passage (S-Pass) travel management system on public transport traversing inter-regional and -provincial routes, as quarantine restrictions ease up in certain areas.

“S-Pass is a system developed by the Department of Science and Technology, and is designed to become a one-stop communication platform between commuters and all concerned LGUs. Under the LTFRB’s recently signed Memorandum Circular (MC) 2021-031, operators of PUVs plying the aforementioned routes are now mandated to use this system based on the following guidelines:

“Failure to comply with these guidelines will be considered a violation of the IATF Resolution as well as other existing LTFRB policies, and will result in corresponding penalties.”

Here’s how SLEX-TR4 is shaping up

“Those who have been waiting eagerly for the completion of South Luzon Expressway–Toll Road 4 (SLEX-TR4) can rest easy—construction of the project continues despite pandemic restrictions and right-of-way issues.

“‘We are in the initial stages of construction for SLEX-TR4, but despite the limitations of the pandemic and delays in right-of-way acquisitions, we’re moving forward and making good progress,’ SMC boss Ramon S. Ang said.

“‘As with any project of this size, acquiring all the necessary rights-of-way is the primary challenge. While we anticipated that it will take some time, it also doesn’t mean we don’t do anything. We are using the same strategy we utilized for our Skyway 3 project—which is to concentrate work on all workable areas and then adjust as other areas become available.’ 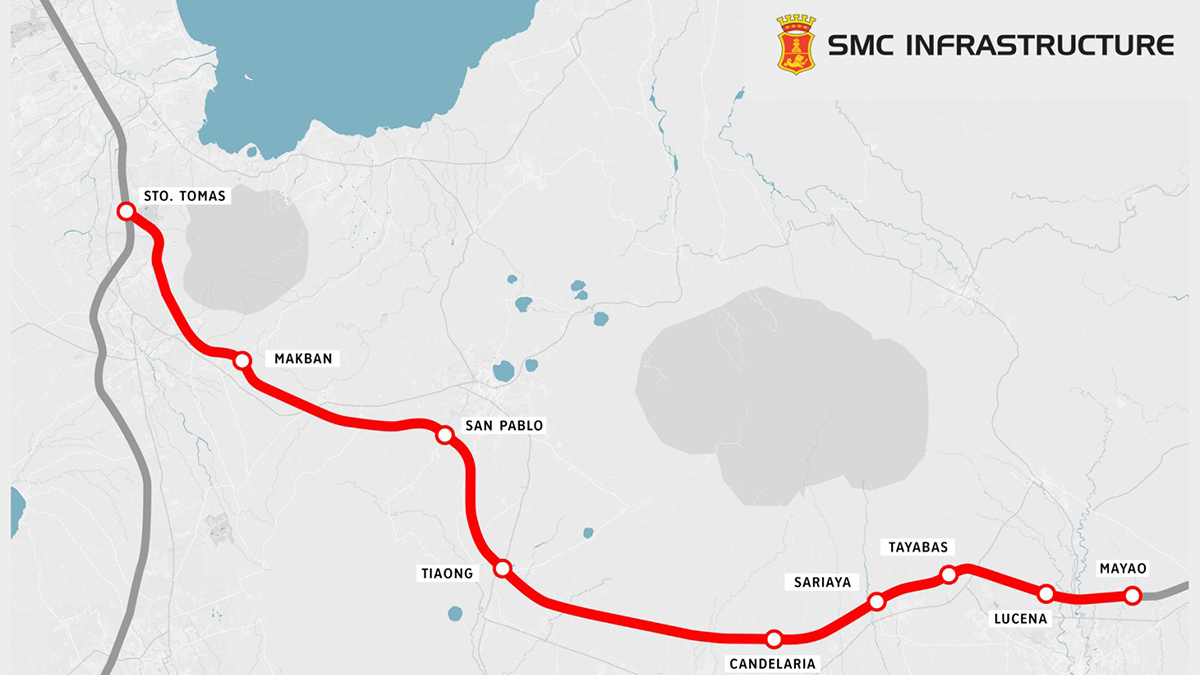 “Work on the expressway extension began in 2019, and is now concentrated near Alaminos, Laguna, and Tiaong, Quezon. Once completed, the 66.74km extension—SMC’s longest expressway project to date—will improve travel times to Lucena City, the capital of Quezon Province. Ang also shared that SLEX-TR4 will help spur economic growth in Southern Luzon.

“‘We are confident that we will eventually overcome all these challenges, with the support of our government, LGUs, and all stakeholders,’ Ang said. ‘We are committed to do our part and put all our energy and focus on getting this project done because it is vital to the growth of the Southern Tagalog region.’”

You can also read our story on why the SMC boss believes infrastructure is not just about solving Metro Manila traffic.

SMC is using recycled plastics as fuel at its cement plant

“After successfully turning recycled plastic into asphalt roads at its test site in Cavite, San Miguel Corporation (SMC) is now looking to build bike lanes across the country using this technology. But during a Summit Media Sandwich Session interview, the SMC big boss himself told us that he actually thinks a better use for these plastics would be as fuel substitutes—and this is something the company is currently doing at its cement plant in Bulacan.

“Late last year, the company already announced its plans to buy bigger volumes of plastic waste to fuel its cement manufacturing facilities. This is part of the company’s effort to aid the country in solid waste management as well as to create more livelihood opportunities for Filipinos amid the pandemic.

“Also, the company has already completed its materials handling facility in Pangasinan, allowing it to safely collect and store plastic waste on a larger scale and safely convert these wastes into energy, ultimately reducing dependence on fossil fuels and slashing greenhouse gas emissions.

“‘I hope we can gather all the plastic together and bring that to our cement plant. And there, we can use that as a substitute for fuel—diesel, bunker, or coal,’ said Ang. ‘So kung meron kang alam na kaya mag-supply ng big volume of used plastic, i-refer mo sa akin, at lahat yun bibilhin ko sa kanila para magamit natin at para maalis natin yan sa mga dagat natin, at baka makain pa yan ng isdang kinakain natin sa araw-araw.’ 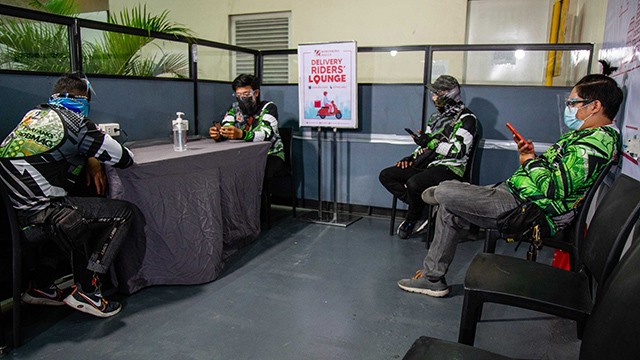 Delivery riders can take a breather and recharge at these dedicated mall lounges
View other articles about:
Read the Story →
This article originally appeared on Topgear.com. Minor edits have been made by the TopGear.com.ph editors.
Share:
Retake this Poll
Quiz Results
Share:
Take this Quiz Again
TGP Rating:
/20