With return to office comes the return of proposals to solve EDSA traffic
by TopGear.com.ph | Apr 3, 2022

“The first option involves expanding the number of license plate number numerals covered by the measure on certain days while providing a mid-week break. The second one will have cars prohibited from being out twice a week. Check them out below:

“If passed, these new number coding schemes will be in effect during morning and evening rush-hour periods. That’s 7am to 10am in the morning, and 5pm to 8pm in the evening.”

“The MMDA recently announced that it is now looking to install more CCTV cameras and use more bodycams to better implement its no-contact apprehension program.

“Through the use of bodycams, MMDA enforcers wouldn’t need to flag down traffic violators to issue tickets. Artes said this will also prevent motorists from bribing their way out of violations.

“The MMDA aims to have this new and improved system fully operational before the current administration’s term ends later this year.”

“Remember the proposed elevated walkway and bicycle lane on EDSA? The idea was first floated around in 2019, and it was given the go signal by the National Economic Development Authority (NEDA) in 2020.

“According to MMDA chairman Artes, the agency is still looking into implementing the elevated walkway as a means of reducing traffic on EDSA. He added, though, that building it would be ‘ambitious’ on account of its cost.

“While Artes did not specifically mention the EDSA Greenways Project that gained NEDA approval and Asian Development Bank (ADB) funding two years ago, his presentation featured images of its proposal. This means it could feature connections to nearby bus stops and train lines, as well as surrounding structures.”

ALSO READ:
Quick guide: 12 Overtaking violations that carry a P1,000 fine
Quick guide: 10 Things to keep in mind before overtaking the car ahead of you

“In light of the completion of the MRT-3 Rehabilitation Project, the Department of Transportation (DOTr) is offering free MRT-3 rides until April 30, 2022. Naturally, some commuters are asking online about how they can avail of these complimentary rides.

“Take note, however, that even if the MRT-3 rides are free, you’ll still be charged P50 for lost or damaged tickets.

“All rides from the first trip at 4:40am to the last one at 10:10pm will be free. The free rides will also be available regardless of starting points or destinations.”

“The DOTr has shared that selected frontliners from the MRT-3 and LRT-2 lines and the Philippine National Railway (PNR) have undergone training on basic American sign language (ASL) to help them communicate with passengers with speech and hearing impairments.

“During the first session, the railway employees were taught to use the alphabet and to communicate colors and numbers using hand gestures. Frequently asked questions from passengers were also discussed during the training.

“‘I hope that we will use this training to enable us to listen with our eyes. With that, it will enable us to make transport become more inclusive including women who are with impairment,’ said Sheilah Napalang, DOTr assistant secretary for planning and project development and Inclusive Transport Unit (INTRU) head. ‘Sana po lahat tayo ay matuto na makipag-usap sa isa’t isa gamit ang ating mga mata, ang ating puso, at ang ating mga kamay.’

“The workshop was held in support of the declaration of the last Monday of March as the annual Women with Disabilities (WWD) Day. The theme for the 18th WWD is ‘Kababaihang may Kapansanan sa New Normal: Kalanga, Kaisa, at Kasama sa Inklusibong Kaunlaran.’”

These COMET buses will connect the LRT-1 and PITX via G. Puyat

“These COMET units will serve as auxiliary transport services to and from LRT-1 stations to enable more seamless and comfortable travel for commuters. The vehicles are equipped with an air-conditioning system, onboard cameras, a media system, display monitors, a wheelchair slot, and a retractable electric ramp for persons with disabilities. Internet connectivity is also available.

“The zero-emission minibuses can ferry up to 30 passengers at a time and travel about 100km on one full charge. For the pilot implementation, the COMET buses will ply the Gil Puyat–Parañaque Integrated Terminal Exchange (PITX) route with several loading and unloading spots in between. You can check out the full route below.

“Commuters need to download the GETPASS app via the App Store or Google Play and sign up to become a member of the LRT-1 Riders Club. Rides can then be availed on a per-month, per-week, or per-day basis. A one-day membership pass costs P50 (Bronze), a one-week pass costs P150 (Silver), and a one-month pass costs P500 (Gold). These membership passes entitle holders to unlimited rides on all COMET buses within the GET Philippines network.

“As part of the launch, LRT-1 Riders Club members can avail of free unlimited rides through the App from March 30 to April 16, 2022.”

ALSO READ:
Sony’s wearable A/C is perfect for sweltering PH commutes
Here’s what colors you should wear if you’re trying to keep cool during a hot commute

Number plate ending in 3? Your registration is valid until end of April

“The Land Transportation Office (LTO) has announced that it is once again extending the validity of registration for some motor vehicles. This time, it’s for cars equipped with license plate numbers that end in 3.

“If your ride is covered by this announcement, you still have until April 30, 2022 to get your requirements and paperwork in order. For more details, check out the agency’s official announcement below.”

The LTO’s plate-making facility has just received a huge boost: The agency has shared that its second license plate-producing robot is now operational.

“On a a two-shift basis, the LTO can produce 7,200 new motorcycle plates per day and a total of 158,400 plates per month. The agency would only need two LTO personnel per shift to man the machine.

“‘Malaking tulong ito para i-augment yung kasalukuyang capacity ng ating facility,” said LTO chief Edgar Galvante. “And as we produce, we will continue to distribute so that we can provide plates for all registered vehicles.’”

ALSO READ:
Here’s your essential guide to the LTO’s online Portal
What’s the penalty for not registering my car for three years?

“In a Facebook post, the Department of Public Works and Highways (DPWH) said that it is looking at Davao City for ideas on how to create Metro Manila’s underground utility cabling system.

“The agency says that, specifically, it is looking at how Davao Light and Power is going about the process of installing its cables underground—the best practices used and challenges encountered by the company and local government units involved.

“Underground cabling system plans for Metro Manila still appear to be in the early stages, but one thing the DPWH picked up from its partners in Davao City is the creation of an ‘underground utility cabling committee’ to streamline coordination between concessionaires.

“The DPWH also shared that it is now considering funding this project by itself as a means of generating income for the government—a decision backed by the agency’s partners down south.”

“According to a new report by Inquirer.net, Finance secretary Carlos Dominguez recently bared plans for as many as 12 new bridges crossing National Capital Region (NCR) waterways.

“Dominguez said that three of these bridges are already set to begin construction in the first half of 2022, thanks to a $175.1 million (over P9 billion) loan from the Asian Development Bank (ADB). The Homeowner’s Drive–A. Bonifacio Bridge, the Kabayani Street–Matandang Balara Bridge, and the Marcos Highway–Saint Mary Avenue Bridge are all scheduled to be completed by 2026.

“The structures will be resilient to earthquakes and floods, Dominguez added. What’s more, they are expected to create employment opportunities and aid economic recovery, too.

“‘With their high multiplier effect and job-generating potential, investments in infrastructure will be the engine for our rapid economic recovery,’ Dominguez said.

“‘Although we have 30 bridges across major waterways of Metro Manila, they are insufficient to efficiently move vehicular traffic. Thus, we are planning to build 12 more iconic bridges in Metro Manila over the medium term.’”

Check it out: The soon-to-open Binondo-Intramuros Bridge

“When the BGC-Ortigas Bridge and Rockwell Bridge were opened to the public last year, the new pieces of infrastructure were the talk of the town because of their potential. As far as aesthetics, though? They looked like, well, regular bridges.

“The designers of the soon-to-open Binondo-Intramuros Bridge made sure to have the looks department covered as well. Frankly, the structure is near-impossible to miss—more so in the evening.

“The DPWH recently released images of the nearly-complete project at night, showing off the four-lane bridge’s signature arches lit up against the backdrop of the Pasig River. Look:

“Once complete, this new China-funded crossing will serve as many as 30,000 cars per day. It cost P3.39 billion and also features sidewalks for pedestrians which are separated from vehicular traffic by barriers.

“After a few delays, the Binondo-Intramuros Bridge will finally be opened to the public right before the start of Holy Week 2022. The DPWH says it will be ready between April 5 to 9, though construction crews are still currently applying finishing touches to the structure.”

NAIA shuttles are up and running once more

“After a brief hiatus due to COVID-19, Ninoy Aquino International Airport’s (NAIA) shuttle services are back and ready to serve frequent airport goers.

“In a Facebook post, the DOTr announced that NAIA shuttle services in between airport terminals are once again operational. They will serve the public 24 hours a day, seven days a week. Oh, and taking this service is completely free of charge, too.”

“In a statement, the DOTr reminded returning overseas Filipino workers (OFW) and passengers onboard flights arriving in the country not to fall for a fake One Health Pass (OHP) website that has surfaced online.

“In case you aren’t familiar with it, the Philippine government is currently requiring all inbound passengers to present an OHP QR code upon entering the country. To get one, you need to provide the OHP website with your basic information together with your flight details and recent travel history.

“The entire process should be free, but the fake OHP website will request for payment via credit card. Authorities are reminding everyone not to fall for the trick, and that the official OHP registration portal is at onehealthpass.com.ph.” 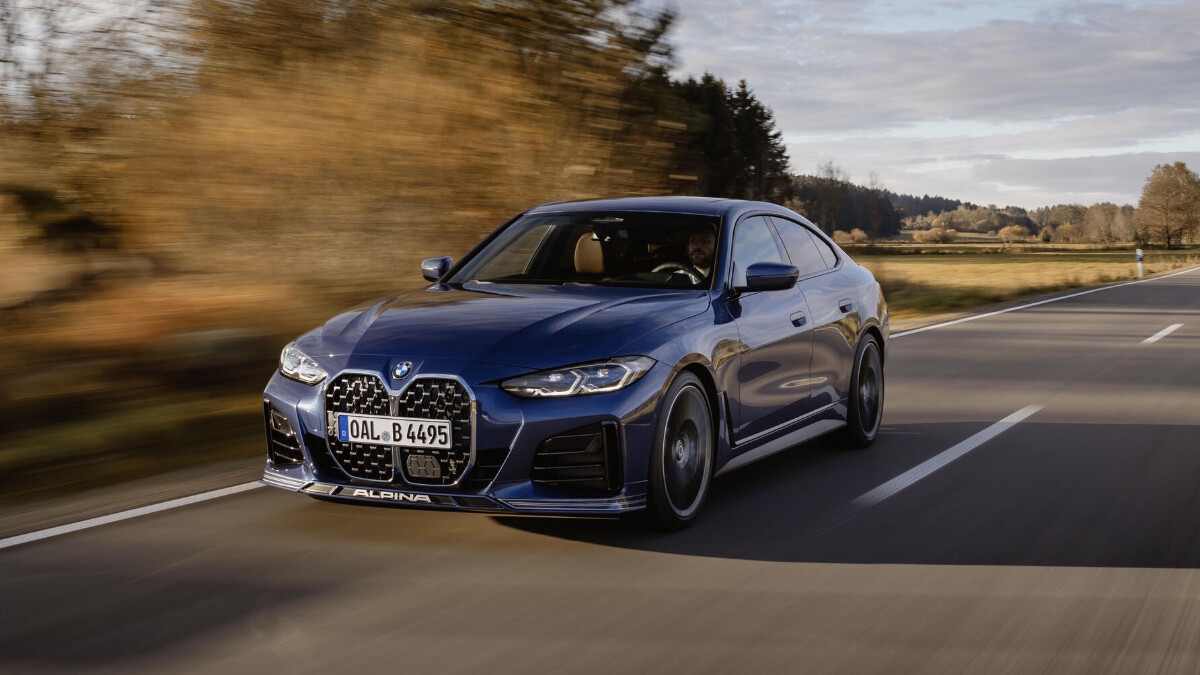 Who here prefers the Alpina B4 Gran Coupe over the BMW M4?
View other articles about:
Read the Story →
This article originally appeared on Topgear.com. Minor edits have been made by the TopGear.com.ph editors.
Share:
Retake this Poll
Quiz Results
Share:
Take this Quiz Again
TGP Rating:
/20