“According to a report by GMA News, the Philippine National Police–Highway Patrol Group (PNP-HPG) recently conducted a one-time, big-time operation to crack down on motorists illegally using blinkers and sirens on private vehicles.

“The PNP-HPG manned the streets of Quezon City, specifically Katipunan Avenue, to flag down erring motorists. Those caught with these illegal accessories installed—one of them being an actual policeman—were asked to dismantle the said accessories on the spot and were also ticketed for their violations.

“The HPG also cracked down on vehicles without plate numbers and motorcycle riders without proper licenses or documents during its operations.”

Vintage cars should be treated as ‘economic assets,’ according to new House bill

“Under House Bill No. 8244, entitled An Act Regulating the Use and Registration of Vintage Automobiles and Other Historical, Classic, or Collector Motor Vehicles, classic cars and vehicles will be treated as ‘economic assets’ that are ‘considered as part and parcel of our history and heritage.’ Besides putting in place policies for their preservation and promoting the production of spare parts, the bill aims to create an environment favorable for people who maintain and repair such vehicles.

“In a statement published on his official Facebook page, HB 8244 co-author Wes Gatchalian expressed his desire to ‘protect our country’s cultural and historical assets.’

“‘Part of this, though overlooked, are vintage vehicles—those that stood the test of time and [serve] as a testimony to the ingenuity, artistry, and skills of their owners, and our mechanics and engineers,’ the statement reads.”

“Once the LRT-1 Extension Project is done, it will extend the train line all the way to Bacoor, Cavite, adding 11 new stations in the process. What’s more, the upgrade is expected to increase the LRT-1’s passenger capacity to 800,000 passengers per day from just 300,000 currently, as well as to make travel to Bacoor from Baclaran possible in just 25 minutes.

“The extension project was initially scheduled to be completed in the fourth quarter of 2021, but this estimate was before the COVID-19 pandemic hit. The Department of Transportation (DOTr), however, assures the public that partial operability will indeed happen within the year. In fact, the agency has just taken delivery of the first batch of new train cars set to ply the rail line once the extension project is completed.

“These train cars were manufactured in Spain and Mexico, and a total of 120 units are expected to ply the LRT-1 line once it’s completed.

“MRT-3 management is dealing with yet another outbreak of COVID-19 within its ranks. This time, though, the train line’s operations are set to continue as no station employees have been infected by the virus.

“The individuals who tested positive are already under quarantine, while those who test negative following an RT-PCR test are allowed to report for work. Again, MRT-3 operations are not affected by this development as no station personnel are affected.”

“The Philippine National Railways (PNR) and the DOTr have just completed the inaugural run of the rail line’s new diesel-hydraulic locomotives (DHL) and passenger coaches.

“These are the units that arrived from Indonesian company PT Industri Kereta Api (PT-Inka) back in December, and which are part of the PNR’s ongoing re-fleeting strategy. These new high-capacity train sets will ply the Tutuban–Los Baños (Manila to Laguna) route and are expected to ferry up to 1,330 passengers per set in a single trip, or about 140,000 passengers daily overall.

“‘The DHL also includes a maximum design speed of 120kph and with high clearance for flood tracks. Its main engine has 2,200 horsepower (1,700kW), and it is equipped with Power Management System for fuel optimization. It also has a monitoring system with diagnostic and recorder function,’ said PNR assistant general manager Ces Lauta.

“The passenger coaches feature five-car formations complete with CCTVs and 36,000kcal/hour air-conditioning systems—the latter is considered suitable for temperatures here in the Philippines.”

The DOTr is trialing another mode of cashless fare collection

“A proof-of-concept for Autopay, a new automated fare-collection system (AFCS), was recently presented to the DOTr at the Parañaque Integrated Terminal Exchange. It was developed by tech company DITO CME, and utilizes kiosks to enable contactless transactions. These kiosks can then be accessed to purchase single-journey trip tickets or to top up stored-value cards.

“Autopay will also feature an e-wallet that seems to be accessible through a dedicated mobile app. Unfortunately, no specific details on this were disclosed yet, only that the new system will be available for sampling among a small group of commuters over the next few weeks.

“Autopay could potentially be one of several fare-payment options, the agency says, adding that the AFCS national standards, once finalized, ‘shall enable an open and competitive environment among multiple [AFCS] providers.’”

PMVIC operations have been suspended in a La Union LGU

“A resolution suspending San Fernando PMVIC operations has already been passed unanimously by members of the city council. In a statement released on the Sangguniang Panlungsod–City of San Fernando, La Union Facebook page, the local government cited the following reasons as grounds for the suspension:

“The quality of PMVIC roadworthiness testing procedures first came into question after a Pampanga-based businessman’s 2011 BMW Z4 failed to pass despite casa mechanics not finding anything wrong with his vehicle. Since then, numerous complaints have surfaced, including alleged instances of mechanical damage resulting from improper handling of vehicles to faulty equipment.”

The DOTr warns about PMVIC scammers—those trying to scam operators, that is

“In a statement posted on social media, the DOTr and the LTO warned PMVIC operators and applicants to be wary of ‘fraudulent and unlawful schemes to solicit funds’ and individuals who have a penchant for name-dropping government officials. The agency is encouraging anyone who encounters such unscrupulous personalities to refrain from engaging with them and to report them to the proper authorities.

“‘We wish to inform and warn the public that the DOTr and LTO have not authorized any person, groups of persons, or even the DOTr-LTO personnel to solicit money or other things of value from the public, particularly from PMVIC applicants/operators, in exchange for alleged benefit or favor, or for any other cause and purpose, for that matter,’ the DOTr said.

“‘These solicitations are fraudulent, unauthorized, illegal, and absolutely prohibited. The DOTr and LTO condemn these activities in no uncertain terms, and categorically deny any involvement or participation in said schemes.’”

“In a Senate hearing the past week, the Senate Blue Ribbon Committee said it will investigate the top officials of the DOTr and the LTO for their alleged failure to produce new motorcycle license plates.

“Senator Richard Gordon, the author of Republic Act No. 11235, blamed the two agencies for not being able to produce motorcycle license plates in time—something that he says is helping criminals to conveniently escape from crime scenes. Aside from this, the veteran lawmaker also accused the officials of the two agencies of failing to fully implement RA 11235, otherwise known as the Motorcycle Crime Prevention Act.

“Last year, LTO chief Edgar Galvante issued a memorandum order suspending the implementation of some provisions in RA 11235 due to the delay in the production of motorcycle plates. This angered Gordon even more: ‘Is the LTO a do-nothing agency?’

“Unfortunately, DOTr secretary Arthur Tugade and Galvante failed to attend the hearing, leaving their representatives to answer Gordon’s queries about license-plate production and distribution. But it appeared that none of the representatives could give the senator a definitive answer. It even reached the point where they had to reply, ‘No answer, your honor.’

“Gordon instructed the Senate secretariat to write a ‘strongly worded letter’ to Tugade and Galvante requiring them to attend the Senate Blue Ribbon Committee hearing on the license-plate delays. The lawmaker warned the two officials that they might face charges of malfeasance if they fail to come up with a clear explanation regarding the issue.”

NLEX begins latest round of maintenance work on tollway lighting

“Beginning February 2021, lights along the 33km stretch of North Luzon Expressway (NLEX) from Balagtas, Bulacan, to San Fernando, Pampanga, will be replaced with brighter, more reliable, more energy-efficient, and more durable LEDs. A total of 1,300 lights are scheduled to be replaced with 20-lux LEDs capable of lasting up to 70,000 hours.

“In a statement, NLEX management said these new LEDs are similar to those used along expressways abroad, and easily exceed the 12-lux requirement set by the Department of Energy.

“‘This move aims to standardize our lighting and provide uniform luminosity of roadway lights for the entire NLEX system—from Balintawak all the way to areas in the north,’ NLEX Corporation president and general manager J. Luigi Bautista explained.

“The major tollways connecting the northern and southern parts of Metro Manila are really starting to take shape as San Miguel Corporation kicks off work on the 1.2km road that will link its recently completed Skyway Stage 3 to the NLEX Connector Road. The latter, which is being constructed by Metro Pacific Tollways Corporation, is an 8km elevated expressway that runs from C3 in Caloocan to Santa Mesa in Manila.

“The connecting road between the two elevated expressways was originally scheduled to be delivered by December 2020, but as with Skyway Stage 3, right-of-way (ROW) issues had thrown the timeline off-track.

“‘We’re already mobilizing our contractors to start work in areas that are unobstructed, where we’re permitted to work,’ said SMC president and COO Ramon S. Ang. ‘We’re also already committing the funds needed to buy the ROW properties, so hopefully, these issues will be resolved the soonest.’

“‘To show our commitment to complete the connection, even if the main alignment was already moved to San Juan River, we signed a memorandum of agreement with the Toll Regulatory Board and the Department of Public Works and Highways. We basically already committed the budget for the ROW acquisition—we will pay for it—and we will complete this section within 24 months.’”

Cebu City BRT should be partially operational within the year

“The DOTr has announced that it is eyeing the partial operability of the Cebu Bus Rapid Transit (BRT) within 2021.

“The agency ordered the Cebu BRT project management team and concerned transportation officials to implement a 24/7 construction schedule to fast-track the project’s completion. The new work schedule will not only hasten the progress of the BRT project, but will also generate jobs for the locals of Cebu.

“The project includes the establishment of a 13.2km BRT lane with 17 stations, two terminals, and one depot. It will traverse the South Road Properties (SRP) through Mambaling and eventually up to IT Park. Once completed and fully operational, it is expected to ferry about 60,000 passengers daily.

“Currently, Package 1 of the project is reportedly at the procurement stage. This major component of the entire BRT project covers a 2.6km segment of the busway with four stations. It will also include ‘urban realm enhancement, and vital intersection improvements.’

“There will also be a 20.2km bus feeder system that will be built alongside the Cebu BRT. The system will run with mixed traffic and will be feature sidewalk bus stops and shelters along the following routes: Cebu IT Park–Talamban, Mambaling-Bulacao, and Talisay-SRP.” 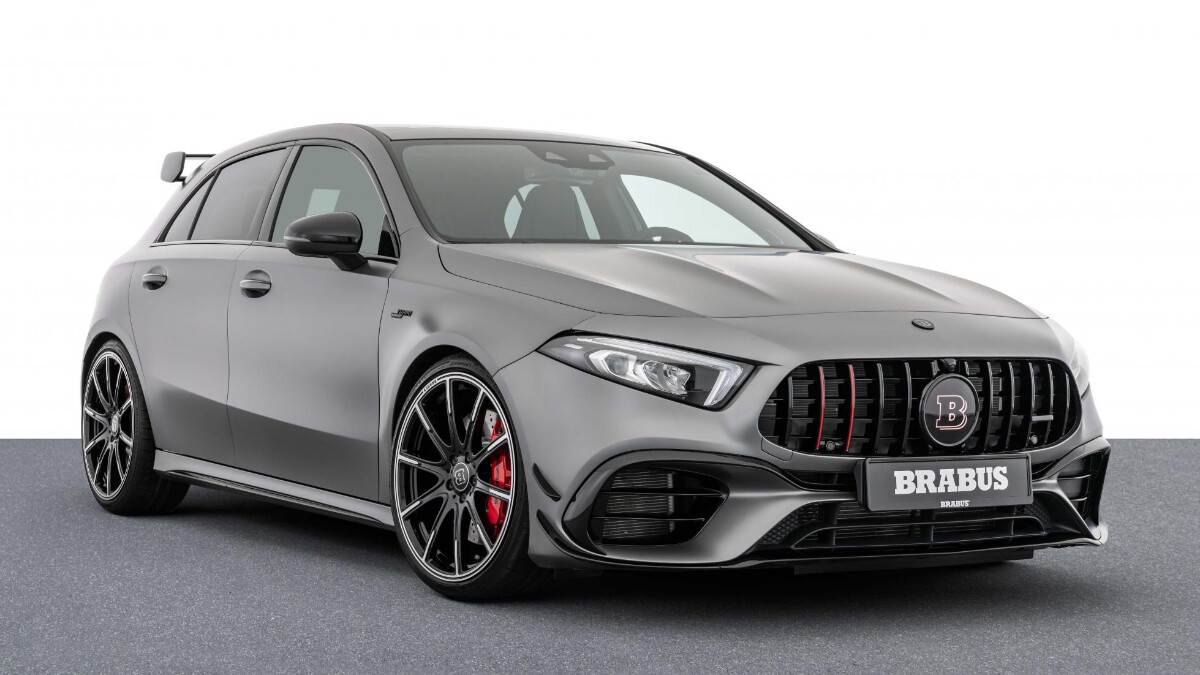 Stock Merc-AMG A45 S not powerful enough? The 444hp Brabus B45 says hey
View other articles about:
Read the Story →
This article originally appeared on Topgear.com. Minor edits have been made by the TopGear.com.ph editors.
Share:
Retake this Poll
Quiz Results
Share:
Take this Quiz Again
TGP Rating:
/20