Nissan launches new Patrol after more than a decade

At long last, a new model of the popular SUV is coming
by Vernon B. Sarne | Feb 18, 2010
CAR BRANDS IN THIS ARTICLE 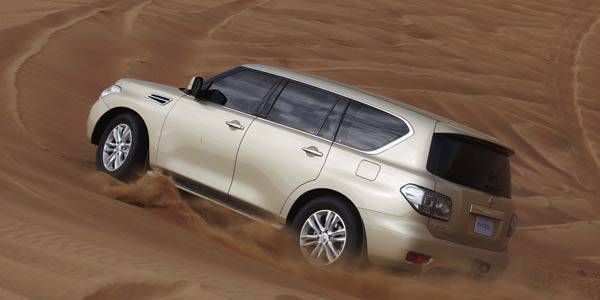 For years, we've been badgering Elizabeth Lee, the current president of the Chamber of Automotive Manufacturers of the Philippines, as to when the new Nissan Patrol would be arriving. You see, Lee also happens to be the senior vice president of Universal Motors Corporation, the exclusive distributor in the country of Nissan commercial vehicles (the Patrol SUV, the Navara pickup and the Urvan van). Nissan is the only carmaker in the Philippines that has two separate distributors for its commercial vehicles and passenger cars (Nissan Motor Philippines).

Our impatience has been fueled by the fact that the current Patrol that UMC is selling is a really old model already. Yes, its revised form was launched in 2004, but its basic chassis first rolled off the assembly line in 1997. That technically makes the current Patrol already 13 years old. I don't know about you, but I think 13 years with cars is like 100 years with humans. Okay, maybe just 80, but you get the point.

No wonder the Patrol is no longer the favorite ride of politicians. There used to be an era when a cruising Patrol was the preferred way of our congressmen to show us where our money went. Today, that honor belongs to the Ford Expedition, the BMW X5 and even the Porsche Cayenne. Even corrupt politicians want their rides to be modern, you know.

But here's good news to our very honorable lawmakers: An all-new Nissan Patrol is soon arriving. In fact, Nissan has just finished letting the international media test-drive it in the desert. As in the Middle East. Apparently, the choice of venue was to commemorate the Patrol's rare feat back in 1962, when it became the first vehicle--according to Nissan--to cross Australia's Simpson Desert. Hence, the media event that launched the latest Patrol was called "The Hero Comes Home," meant to point out the fact that the Patrol is at home in the wilderness. I now have an urge to inform Nissan that the Patrol is also very much at home inside the posh garages of Philippine government officials.

The exterior design--a press statement quoted Nissan's product design director as saying--is "not as edgy and hardcore as its predecessor. The softer new surfaces are beautiful and add a sense of modernity to the design equation, while still maintaining a ruggedness and commanding road presence." The design director's name, by the way, is Taiji Toyota. That the new Patrol bears a resemblance to the Land Cruiser is probably just a weird coincidence. Anyway, interior space is roomier, with 100 millimeters more legroom for passengers in the second row.

The biggest story about the new Patrol is found under the hood, where a new 5.6-liter V8 gasoline engine now resides, supplanting the current generation's 4.8-liter straight-six petrol powerplant. The new engine, mated to a seven-speed (yes!) automatic transmission, boasts 400hp and a Senate-shaking 560Nm of torque. This was achieved with what Nissan calls "variable valve event and lift."

Nissan also introduces the Hydraulic Body Motion Control System on the new Patrol to complement its four-wheel drive system. I don't know what it does but Nissan thinks it will lessen body roll during cornering.

More goodies (assuming UMC wouldn't drop them to keep the new Patrol's price down)? There's a multi-screen DVD entertainment package, which includes two seven-inch TV screens integrated into the back of the front headrests. There's also the curtain vent, which blows "a strong current of cool air down forming a curtain of air that acts as a barrier to heat penetrating the cabin." And there's a cooler inside the center console, big enough to chill six 600mL beverage bottles.

Wow. A new Nissan Patrol during the election season. What are the chances Nissan timed its launch to ensure it would sell a lot of units to newly installed senators and congressmen in the Philippines?

MMDA to throw bribers in jail
View other articles about:
Recommended Videos
Read the Story →
This article originally appeared on Topgear.com. Minor edits have been made by the TopGear.com.ph editors.
Share:
Retake this Poll
Quiz Results
Share:
Take this Quiz Again
TGP Rating:
/20