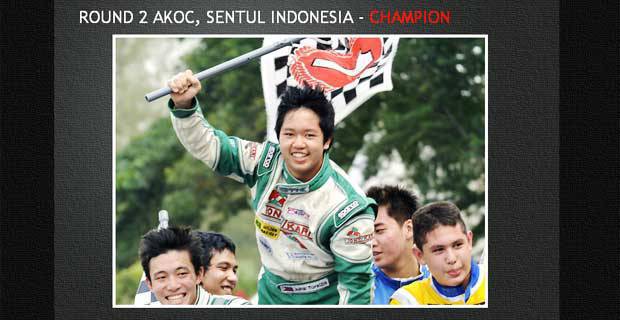 Fifteen year-old Juha Turalba, the lone Filipino out of 17 competing karters from Southeast Asia, claimed the chequered flag and won in the Indonesian leg of the 2009 Asian Karting Open Championship (AKOC).

In Turalba's website, the young karter admitted struggling through the qualifying heats. During the pre-final race, Turalba squeezed through his points rival Tin Sritrai in the second lap, controlled the pace and finished five seconds ahead of the Thai. On the final race, Turalba thought the win was in the bag until the Sritrai took an opportunity to overtake at the same corner where the Filipino passed the Thai in the pre-final race. Not to be deterred, Turalba put the pressure on Sritrai to the point that the Thai overcooked his engine on the 14th lap, leaving Turalba in control and with a sizable lead all the way up to the chequered flag.

"This was the best win for me so far. I've been competing in AKOC for quite a long time and I've always wanted to win in this category," Turalba said.

Turalba is the 2009 Golden Wheel International Motorsports Driver of the Year. He is in tenth grade at the International School in Taguig City.

Barrichello wins top spot in Euro GP
View other articles about:
Read the Story →
This article originally appeared on Topgear.com. Minor edits have been made by the TopGear.com.ph editors.
Share:
Retake this Poll
Quiz Results
Share:
Take this Quiz Again
TGP Rating:
/20