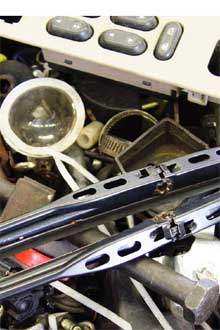 In a bid to bring car theft in the country to 'zero-level,' the Philippine National Police - Highway Patrol Group (PNP-HPG) conducted a series of surprise inspections on dealership of surplus vehicle parts over the weekend.

On August 5, PNP-HPG elements conducted an inspection at the Aurburn Auto Supply in Real 1, Bacoor, Cavite, to determine if the establishment was peddling parts that were cannibalized from stolen vehicles.

The police personnel initiated on-the-spot macro-etching, and used a computerized vehicle information management system to inspect vehicle body and chassis numbers and determine if any of them were from stolen vehicles. Nothing illegal was found at the dealership.

On the same day, PNP-HPG elements inspected LCN Surplus owned by Leonilo T. Natividad in Angeles, Pampanga. Natividad showed documents such as business permit and sales invoice of used engines and surplus for sale, which proved that the items were legally-sourced.

Dubbed as "visitorial inspections," PNP-HPG Director Leonardo Espina said the move was aimed at cutting the supply of surplus parts that were dismantled from stolen vehicles, which is among the modus operandi of car thieves looking for spot cash.

Photo by tome213 via SXC.hu

MMDA launches flood monitoring and control center
View other articles about:
Read the Story →
This article originally appeared on Topgear.com. Minor edits have been made by the TopGear.com.ph editors.
Share:
Retake this Poll
Quiz Results
Share:
Take this Quiz Again
TGP Rating:
/20