* Tires are still making the world of Formula 1 go round. This time, Pirelli announced it is scrapping the proposed tire revisions that had been planned for the British GP onward. The Italian tiremaker\'s statement: \"The tire construction will remain unchanged, contrary to Pirelli\'s initial plans. This decision is due to the fact that the new tires, which were brought to the Friday free practice sessions in Canada, could not be tested sufficiently due to rain--and that the teams failed to agree unanimously about introducing the changes. Instead, a change in the tire production process should now ensure that the delamination issue has been addressed.\"

* Pirelli motorsport director Paul Hembery lashed out at Red Bull and Sebastian Vettel because of their ongoing criticism of the tires even at the back of their dominant performance at the Canadian GP. The current world champion insists that \"the criticism we or I had was not based on performance\" but is \"based on safety.\" Hembery said, \"They have been strong, but some of the comments are very difficult to understand when you look at the performance. Maybe some other teams might have a reason, but you are leading the championship and still complaining? You win the [last] race and I have seen some complaints again here, and those sorts of things are not helpful.\"

* June 20th, 9:30 am: The schedule for Mercedes\'s appearance before the International Tribunal to state its defense against protests filed by Red Bull and Ferrari, with regard to the German team\'s secret tire test. An FIA statement summarizes the case as follows: \"On 5 June 2013, further to protests lodged during the 2013 Monaco GP by Red Bull Racing and Ferrari Scuderia Team against cars #9 and 10 (Mercedes AMG Petronas F1 Team) for having conducted with Pirelli a three-day tire testing using a 2013 car on 15, 16 and 17 May in Barcelona, the president of the FIA, acting as the FIA Prosecuting Body, sent to the president of the International Tribunal a notification of charges against Pirelli and a notification of charges against Mercedes AMG Petronas F1 team.\"

* 4 and 21: The respective number of in-season tests and races planned for 2014. In-season testing is being brought back (at the expense of the young drivers\' test) so that teams will have more time to develop their cars and sort out reliability problems that will doubtlessly come as a result of the formula overhaul for next year. As for the races, two new venues will debut in 2014: Sochi (Russian GP) and New Jersey (GP of America).

* 28: Sebastian Vettel\'s age by the time his recently renewed Red Bull contract expires. The German driver has extended his contract with his current team to the end of the 2015 season. He has so far achieved three titles, 28 race wins, 50 podiums and 38 pole positions with Red Bull.

Shocked & saddened by the news that a marshal who is there to keep us safe has lost his life during our race today. Rest in peace my friend.
- Jenson Button (@JensonButton) remembers the marshal who was killed in a trackside accident during the Canadian GP last weekend. The other F1 drivers have also expressed their sympathies through various outlets.

Finally felt like summer today. Nice little spin to get over the jet lag. Two weeks of training ahead of the big one! #BritishGP2013
- Force India driver Paul di Resta (@pauldirestaf1) looks forward to his home grand prix on June 30th.

Had a great afternoon with Sebastian Vettel. I think I might adopt him. Sebastian Vettel Andretti has a nice ring to it, don\'t you think?
- At 73 years old, 1978 F1 champion Mario Andretti (@MarioAndretti) still wants more kids. As if there aren\'t enough racing drivers in his family already. 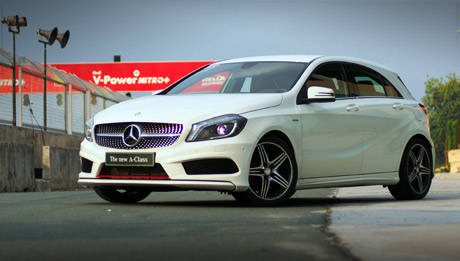 Launched: Mercedes-Benz A250 Sport
View other articles about:
Read the Story →
This article originally appeared on Topgear.com. Minor edits have been made by the TopGear.com.ph editors.
Share:
Retake this Poll
Quiz Results
Share:
Take this Quiz Again
TGP Rating:
/20