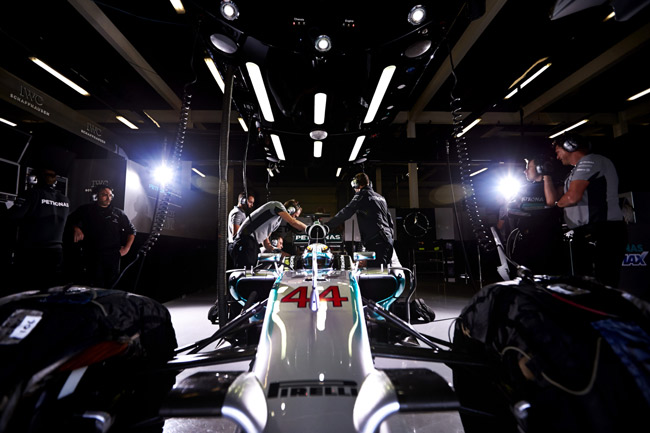 In the lead up to the German Grand Prix, the big buzz in the paddock is over a new technical directive outlawing interconnected suspension systems. There are a lot of raised eyebrows over the timing of this announcement, as championship leader Mercedes is widely believed to have the best system on the grid. But first, let's examine how these things work.

Over the past few years, Mercedes F1 cars have, at times, been temperamental, tire-eating terrors, but there's no other car faster over a single lap. And part of that incredible speed is thanks to the innovative "Front and Rear Inter-Connected" (FRIC) suspension.

Ordinarily, shock absorbers control wheel movement by passing hydraulic fluid through valves between upper and lower reservoirs. The speed at which the fluid flows through these valves limits the speed at which the suspension bounces up and down. Using separate one-way valves makes the limit different for "bound" and "rebound."

Since fluid movement is not instantaneous, a system linking reservoirs of opposing shock absorbers can be used to transfer fluid--and thus, motion--from one side to another. "Cross-linked" shock absorbers have the lower reservoir of one damper linked to the upper reservoir of the other. When the outside damper compresses during cornering, the displaced fluid causes the other damper to compress, too. This prevents body roll, stabilizing the car during turns.

"Parallel-linked" shock absorbers have upper and lower reservoirs connected to their counterparts. This prevents dive and squat under braking and acceleration, because both sides resist compression instead of accepting it. It's an important function in F1, since the "rake" (what cool homies call "stance") of a formula car affects how well those big wings keep it glued to the ground.

Merc's original interlinked rear suspension required complicated valving to switch between "parallel" and "cross-linked" modes. The FRIC system more effectively controls dive and squat by linking the front and rear suspension. But it is still hellishly difficult to set up for each race, and the benefits are questionable. But since there are benefits, no matter how slim, all the teams have it in one form or another.

So why does the FIA want to ban it?

The FIA is laying down the law, defining FRIC suspensions as "aerodynamic devices."

By keeping the car level, FRIC helps control weight transfer and balance load on the tires. But its most important function is to ensure the angle of attack of the wings stays relatively constant, which improves downforce in corners. Thus, the FIA has finally decided to ban FRIC under Technical Regulation 3.15, which prohibits "movable aerodynamic devices." And yes, suspensions are movable devices.

This is a dangerously slippery slope. The only difference between FRIC systems and antiroll bars and anti-squat rear suspension geometry is that FRIC is more effective. Under the new directive, technically, any suspension system can be classified as illegal.

The FIA offered to postpone the banning of FRIC to the start of the 2015 season, provided teams agree unanimously to not protest its use by other teams for the rest of this season. That's like asking all fraternities to stop hazing. It's pretty obvious the FIA wants it banned right now. Anyway, FRIC is officially removed from the cars for this weekend's German GP.

It doesn't seem to matter to the big boys. Both Mercedes and Red Bull Racing will not use their systems in Germany. Apparently, that's one less headache in the setup department for both teams, as they focus on staying ahead of the rest over the mid-season stretch. We also highly doubt the banning of FRIC will change the pecking order down in the midfield. We'll know for sure when qualifying starts at Hockenheim on Saturday.

Parts of this article are adapted from "Car Tech" originally published in the September 2013 issue of Top Gear Philippines.

This is how the Toyota Yaris hatchback looks now in Europe
View other articles about:
Recommended Videos
Read the Story →
This article originally appeared on Topgear.com. Minor edits have been made by the TopGear.com.ph editors.
Share:
Retake this Poll
Quiz Results
Share:
Take this Quiz Again
TGP Rating:
/20