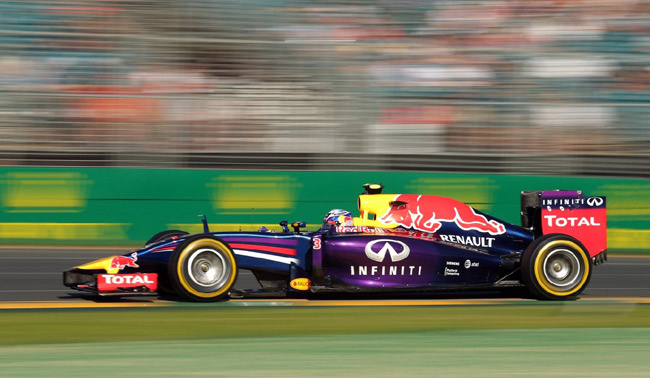 With the Spanish Grand Prix scheduled this weekend, a lot of attention will be focused on whether or not the Red Bull Racing squad can finally take the fight to Mercedes. A car that does well at Catalunya is typically a car that does well everywhere, which is why manufacturers are often eager to roll out chassis and engine upgrades here, especially after the long break from Shanghai. Renault figures it has the teething issues with the new turbocharged engines and Energy Recovery Systems licked, but we won't know for sure until the weekend's over.

Red Bull's problems, however, have not been limited to an uncompetitive engine package. Over the break, Daniel Ricciardo's exclusion from the Australian Grand Prix results was upheld by a sporting tribunal. If you recall, Red Bull--faced with what they called a "defective" fuel flow sensor--decided to use its own measurements, in defiance of FIA directives. The team argued, in court, that its own calculations were inherently more accurate than the sensor's. How could that be so?

Modern electronic fuel injection is a very exact science. With finely tuned high-pressure piezo-electric fuel injectors, precisely metered fuel delivery is important. Without it, an engine can use too much gasoline, or even worse, blow itself up. In chasing that last 10th of a percentage in terms of fuel economy, engine programmers have to "lean out" the fuel charge very precisely. Inject too little fuel, counterintuitively, and the engine could run too hot and burn out.

Even without a fuel flow sensor, an engine maker has all the information it needs to measure fuel flow. Electronic data regarding fuel pressure, injector operation, engine speed, and engine temperature help build a mathematical model of how much fuel is going into the motor at all times. Injector pulse width, or the amount of time an injector is open, already gives you a rough idea of the volume of fuel flowing into the motor. Temperature data is required to adjust those readings, as fuel is denser when it's cold and lighter when it's hot. The temperature and the pressure inside the combustion chamber also change how much fuel goes through the injector when it's turned on.

The calculations needed are complex, and while some degree of accuracy is possible, it will never be as accurate as direct measurement. This is where the ultrasonic fuel flow sensor built by Gill Sensors comes in. Unlike mechanical sensors, which partially obstruct flow, an ultrasonic sensor is a non-contact sensor. It uses ultrasonic pulses to measure the speed of the fuel flow past the sensor. The only correction/calculation needed is an adjustment for the temperature of the fuel itself, but with the sensor inside the fuel tank, the temperature is more stable and easier to adjust for.

Red Bull lost its court appeal because it could not show that its calculation methods were more precise than the sensor. Especially as the sample calculations it presented to the court ignored several variables, such as vibration and race conditions. It was also revealed, from the court's interpretation of its own race data, that it did indeed exceed the 100kg/hr limit set by the FIA. Yes, it is extremely complicated! This is why the FIA requires teams to coordinate with them beforehand to work out accepted adjustments to the electronics in case of sensor failure, which Red Bull failed to do.

Moving forward, it appears as though Red Bull's issues are due either to modifications to the sensor fittings for installation in the fuel tank, or to additives in its fuel that degrade the rubber gaskets. Hopefully, by the time the race starts this weekend, things will have been sorted out.

Such are the teething problems of new technology. But in the quest for better fuel economy, accuracy is top priority. Without it, you could be left high and dry, long before the finish line.

Which body style of the all-new Mazda 3 is more popular?
View other articles about:
Recommended Videos
Read the Story →
This article originally appeared on Topgear.com. Minor edits have been made by the TopGear.com.ph editors.
Share:
Retake this Poll
Quiz Results
Share:
Take this Quiz Again
TGP Rating:
/20