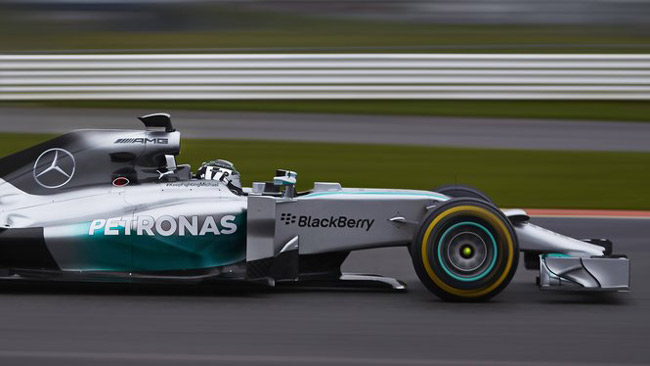 The Canadian Grand Prix is one of the few venues on the calendar where the new Formula is expected to produce lap times approaching those of previous years. While this year's cars are down on mechanical and aerodynamic grip from cars in years past, the benefits in terms of usable power given by the more extensive hybrid systems and the turbocharged V6 units are expected to show up on faster tracks like Montreal.

So far this season, however, none of the competition has been able to hold a candle to the Mercedes V6. And this is mostly thanks to the split-turbo solution dreamed up by Mercedes engineers. But why should simply cutting a turbocharger in half make such a huge difference?

A turbocharger is basically an air pump meant to increase airflow into the engine. More air to burn means more power. Typically, engines have to pull in that air using the vacuum created by the pistons moving up and down, pulling in air through the intake valves. Understandably, there are limits to how much air the pistons can suck in, no matter how fast they move. A turbocharger pushes the air into the motor, forcing much more into the combustion chambers than can otherwise fit. This is why we refer to turbocharged engines as "blown" motors.

One of the reasons for the turbo's effectiveness is that more intake air means more exhaust air, which means more pressure to drive the turbo--a positive feedback system that makes for big power gains, with sometimes explosive results. Traditionally, turbochargers have used wastegates, which bleed off excess pressure, to control impeller speed. Formula 1 uses an electric motor to instead slow down the turbo by using that excess speed to generate electricity--electricity that can then be used to power electric assist motors or to speed up the turbo for better response at lower engine speeds.

One problem that the electric assist motor can't solve is heat. Not only is pressure transmitted between the exhaust and the intake, but also heat. And with the turbocharger spinning at 125,000rpm, it also naturally generates a lot of heat in and of itself.

To remove this heat from the intake air, large intercoolers are used. These are called "inter" as they're between the turbo and the engine. These are effective, but take up a lot of space on these tiny, aerodynamic cars. What Mercedes has done with the split-turbo is separate the exhaust turbine and the intake compressor and put them on separate sides of the engine. These are already split on most F1 cars because the electric motor sits in the center cartridge. Mercedes has simply carried that idea to the extreme. While the complicated linkage that connects the two makes for less efficiency, the huge difference in heat buildup more than makes up for it.

Mercedes engines can run cooler, generate more power and use less fuel. Extra fuel is often sprayed into turbo motors to cool them down through evaporative cooling, much like spraying water on a hot surface. Mercedes needs to do this less than anyone else. And they need smaller intercoolers than anyone else, which makes for tighter packaging and better aerodynamics. And this cool intake air is denser, meaning more air and more power.

Other manufacturers are not expected to catch up until 2015, as engine freeze rules prevent them from making structural changes to the system within the season.

12 reasons why endurance racing may be better to watch live than F1
View other articles about:
Recommended Videos
Read the Story →
This article originally appeared on Topgear.com. Minor edits have been made by the TopGear.com.ph editors.
Share:
Retake this Poll
Quiz Results
Share:
Take this Quiz Again
TGP Rating:
/20