Inaugural Asian V8 Championship to be held at PH racetracks 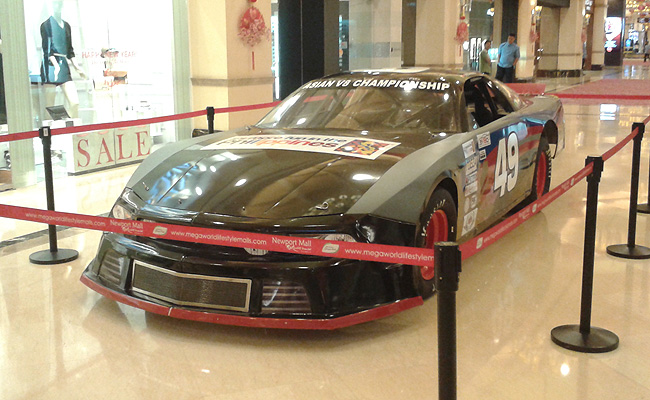 For the first time, the Philippines will see the NASCAR kind of racing that’s popular in the United States, as the Philippine Formula Autosport Foundation stages the very first Asian V8 Championship Series in the country.

The Asian V8 Championship Series is an adaptation of the NASCAR Whelen Euro Series in which popular and talented local driver Enzo Pastor proved his mettle by finishing sixth overall after 12 races. The cars in the series are eight late-model 5.7-liter V8 NASCAR race cars--all acquired by PFAFI at $80,000 to $100,000 per car--that have been detuned to produce 450hp and are equipped with a four-speed manual transmission and slick tires.

According to PFAFI founder Tom Pastor, the series' aim is "to develop the Philippines as a hub for late-model NASCAR racing in Asia" and to help make Asian race car drivers "competitive in international racing events in Europe and America." As such, drivers from other countries have signified their intent to join the Asian V8 Championship Series, including Christian Jones, the son of former Formula 1 world champion Alan Jones.

Asked how much it would cost PFAFI to organize the series, Pastor gave a ballpark figure of P10 million, "and that doesn’t count the cars."

Like in the NASCAR Whelen Euro Series, each car will have two drivers with one competing in the Open category and the other running in the Pro category. At the end of the series, the Open category winner will reportedly race in the NASCAR Whelen Euro Series, while the Pro category victor will see action in the K&N Pro NASCAR Series in the US.

"With the Philippines being my home court, I don't see any reason why I should lose," Enzo Pastor said confidently.

With Pastor's father organizing the event, TopGear.com.ph asked the multi-awarded driver if this didn't present a conflict of interest in the series.

"That's why I have no part in organizing this," the younger Pastor pointed out. "My father's the one organizing the series. I'm just a driver here."

The younger Pastor also pointed out that since the Asian V8 Championship Series will be following the format of the NASCAR Whelen Euro Series, the cars will be strictly regulated--like the engines being completely sealed and limiting the car's spring rate--leaving the team's mechanics very little to work on, like damper setups, for example. International competitors, however, will have access to the car for testing anytime in between races.

The inaugural season will only see six races, but the elder Pastor expects the number of cars on the grid and the races itself to increase in the next five years that PFAFI is planning to hold the series.

"We'd like to see the Asian V8 Championship Series race in other Asian countries," Pastor said, adding that the cars have already been invited to run an exhibition race in Malaysia at the Sepang International Circuit later this year.

The official launch of the Asian V8 Championship will be on February 27 at 6pm at the Resorts World Atrium. Testing for the series will then begin on March 1 at Batangas Racing Circuit, with local and international celebrities reportedly being invited to join in the action. Come April 5 and 6, the first of three two-day motorsport festivals to showcase the Asian V8 Championship Series will be held at Clark International Speedway.

So, if you're a big NASCAR fan, this could be the closest thing you'd ever get to seeing American stock car racing in action. Time to mark your calendar then.

Hyundai PH announces availability, specs and price list of Grand i10
View other articles about:
Read the Story →
This article originally appeared on Topgear.com. Minor edits have been made by the TopGear.com.ph editors.
Share:
Retake this Poll
Quiz Results
Share:
Take this Quiz Again
TGP Rating:
/20