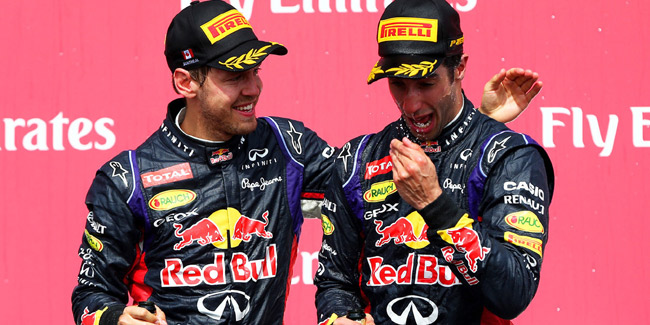 The Wall of Champions. The mere mention of the infamous wall on the start-finish straight sends shivers down many a driver's spine. But one of the more controversial incidents at the action-packed Canadian Grand Prix was noteworthy mostly by how it didn't involve the Wall at all. But we're getting ahead of ourselves. The Canadian GP is not the easiest to catch, happening at two in the morning here in the Philippines, but few of those who did watch it got any sleep. "Nail-biter" doesn't even begin to describe it. Here are some highlights:

It was almost a terrible day for Nico Rosberg. The young German beat teammate Lewis Hamilton fair and square in qualifying and held him off on a very early challenge. But Lewis proved faster mid-race, at one point forcing Nico into an off at the chicane by the Wall of Champions. Nico stayed right on the gas and came out ahead, which prompted an investigation. He got off with a mere warning, but just a dozen laps later, a possible software glitch in the regenerative rear brakes reared its ugly head, leaving the Mercs the slowest cars among the front-runners.

From there on, Nico drove the race of his life, setting fastest sector times on the twistier sections of the track to counter the loss of power. After a brilliant drive and defense against a hard-charging Daniel Ricciardo, Nico is surely very pleased to have salvaged second place from what looked like a sure DNF.

It was definitely a terrible day for Lewis Hamilton. Lewis, on the other hand, got that DNF. He was arguably the fastest driver with the fastest car this weekend, but relying on a rear heavy brake balance caused his rear brakes to seize when the Mercedes glitch came to the fore. With two DNFs this year, Lewis will need three wins in a row to win that championship lead from Rosberg. At least he's no longer claiming that they're no longer friends.

It was a great day for Sebastian Vettel. The Bulls captured two spots on the podium with Vettel finally showing that qualifying flair he's known for, pipping his tremendously quick rookie teammate by mere hundredths in the Q3 shootout. Vettel drove an excellent race, splitting the Mercs in the first stint, staying in contention through the middle stint, and avoiding the mother of all collisions to claim his second podium of the season in third.

It was an ecstatically fantabulous day for Daniel Ricciardo. Red Bull's red-hot rookie is nothing if not consistent. His raw speed allowed him to pip the Williamses and Vettel as they all cycled through their pit stops, coming out behind the one-stopping Force India of Sergio Perez in third place on his last stint. With only a few laps left, Ricciardo made a daring move on Perez and got past, and latched onto Nico's tail, finally overtaking him on the penultimate lap in a move that brought the crowd roaring to its feet. Say what you will about the quieter new engines, but hearing that crowd during the many spectacular overtakes of the day is a worthwhile trade-off. The plucky Australian may be the most popular race winner this season. And speaking of popular drivers...

It was a horrible day for Sergio Perez and Felipe Massa. With the leading Mercs in trouble, Massa must have felt that this was his race to lose. And lose it he did, in spectacular fashion. He had trouble clearing his teammate Valtteri Bottas in the first stint, then had to work his way back up the order after the pits. Near the end, Massa had to appeal for team orders to move his slower teammate aside so he could shoot for the podium. While Massa seemed set for fourth, disaster struck when Perez jinked left as Massa challenged him going into turn one, causing a last-lap yellow flag and denying both drivers a good finish to a scrappy afternoon. Perez would later be assessed a penalty for this reckless move, to be served at the next race.

But it was a quietly good day for Jenson Button. Somehow, sight unseen, Button managed to improve on his sixth place at Monaco with a fourth place at Montreal. After going backwards at the start of the race, needing an early pit for tires and having to sit outside the top 10 for most of the race, he finally found his groove in the last stint, overtaking several other drivers on track, including Fernando Alonso and Nico Hulkenberg. The last-lap fracas between Massa and Perez gifted him with fourth. Slow and steady may not win an F1 race, but it will get you halfway there. Just ask Hulkenberg, whose one-stopping rolling chicane of a Force India put him in fifth place.

Up and down the rest of the field, there were drivers and teams having really bad days. Pastor Maldonado managed to get through the weekend without earning any more points on his license, his Lotus Renault instead playing Flappy Bird--er, bodywork--and retiring in the pits. Max Chilton ended his consecutive-finishes streak, taking out Marussia teammate Jules Bianchi on the very first lap, and earning a penalty for the next race in the process. Caterham's Kamui Kobayashi played Tokyo Drift with a broken suspension, while Kimi Raikkonen managed to avoid a top 10 spot all race, until the last lap incident gifted the Ferrari ace a solitary point.

If that's progress at Ferrari, we'd hate to see what regression looks like. Red Bull Racing, on the other hand, should be ecstatic going to the Red Bull Ring in Austria on an unfamiliar high in this silver-washed season.