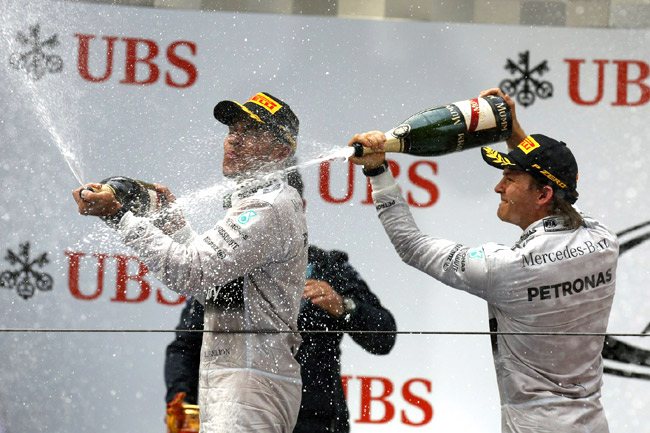 Coming into the fourth round, all the talk was about Mercedes and their drivers. Bahrain gave us a taste of what is to come between them. "I strongly dislike coming second to Lewis," revealed Nico Rosberg.

Lewis Hamilton, meanwhile, said: "Three in a row will be special."

While Hamilton won one of the closest tussles we've seen lately, Rosberg said it was payback time in China. Was it really?

Coming second to Lewis in the previous two races, Rosberg knew he had to deliver. The German looked to be on the back foot compared to his teammate right from the start. Come qualifying, he spun on the last corner of his penultimate lap, ending up behind the Red Bulls while Hamilton increased his advantage to Daniel Ricciardo who started in P2. Was it a case of trying too hard for Rosberg? It certainly looked that way.

At the start of the race, he had to take caution with Felipe Massa's wild start, and he also collided with Valtteri Bottas. Luckily, Nico continued on without a hitch. It was a bit of a recovery drive as he fell to seventh, but the cars in front of him were easy pickings. Given that slight scare at the first corner on the first lap and the lack of telemetry throughout the race, Nico must be happy to finish behind Lewis this time around.

...just a better one for Lewis.

The Brit looked to be on it all weekend. While he had slight issues with the car during practice, his pace was there. No one could match that pace in qualifying. Lewis drove exceptionally well in the mixed conditions.

He looked untouchable. Again, no one could match his pace during the race, crossing the line 18 seconds ahead of Rosberg and bagging three victories in a row for the first time in his career. "Tough race?" Nico jokingly asked Lewis before claiming the silver.

It was a great day for Fernando Alonso...

Forget the Mercs. They're one second faster than everybody else. Alonso's target is the Bulls. And with another dazzling start the Spaniard battled with them, particularly Daniel Ricciardo. Fernando did a long stint with his final set of tires and fended off the Red Bull hotshot, claiming his first podium of the season. Brilliant drive. Even a fellow writer said "If the Ferrari's turbo were half as big as Alonso's cojones, he'd have a fighting chance at the championship.”

...and an even greater one for new Ferrari team principal Marco Mattiacchi.

The former head of Ferrari's North American road car division attended his first grand prix as the Scuderia's new boss, and the timing couldn't have been better to score your team's first podium of the season.

It was an exciting day for Daniel Ricciardo...

Sebastian Vettel had his hands full with his teammate. Last time out in Bahrain, Ricciardo blitzed past the four-time champ, showing that he meant business. In China, the Australian out-qualified his more experienced teammate yet again, but Vettel managed to move up to second while Ricciardo's somewhat slow start dropped him to fourth. As the race reached half distance, the German started to struggle with his tires and Ricciardo quickly made up ground.

...which became even more exciting with a radio message relayed for the second time.

"Sebastian, Daniel is faster than you," we heard in Bahrain. We heard it again in China: "Sebastian, let Daniel through." Okay, the call in China was a bit premature given that Ricciardo was still only gaining on Vettel. Sebastian appropriately asked about the strategies and replied: "Tough luck."

We want a good fight between these two. But Vettel's tactlessness surely didn't win him any favors from his fans, and those who already didn't like him to begin with, hated him even more. He just sounded like a brat.

It was an encouraging day for Renault...

Mercedes is still way ahead, but Renault can reflect on its performance in the Chinese Grand Prix. Red Bull Racing finished fourth and fifth, while Daniil Kvyat in the Toro Rosso crossed the line in 10th. The Caterhams also lasted the entire race. Too bad Kamui Kobayashi's pass on Jules Bianchi for 17th place didn't count.

...and an impressive one for Daniil Kvyat.

The Russian rookie continued his solid start to his Formula 1 career by finishing in the top 10 once again. Quick all throughout while looking after his tires, he had a good battle with Jenson Button and beat the Brit for the final point. STR is widely regarded as the school of hard knocks, and he seems to be thriving quite well.

Audi A3 is 2014 World Car of the Year; beats BMW 4-Series, Mazda 3
View other articles about:
Recommended Videos
Read the Story →
This article originally appeared on Topgear.com. Minor edits have been made by the TopGear.com.ph editors.
Share:
Retake this Poll
Quiz Results
Share:
Take this Quiz Again
TGP Rating:
/20