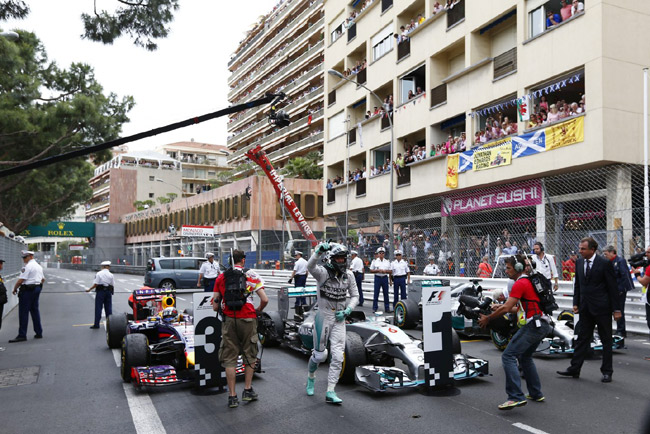 Monaco. Sun, sand and casinos make it one of the most popular destinations for the European jet set. With the greatest per capita concentration of supercars and exotics anywhere in the world, it seems a natural venue for Formula 1. Normally, it's fantastic to watch the cars roaring through the dangerously twisty city streets for a few laps, right before the lack of overtaking opportunities and the prevalence of yellow and red flags put you to sleep. But the infighting this season took things up a notch. Play the right music, and even the most boring party will seem exciting.

Aside from Adrian Sutil's big off--after which he was probably asking his team to "Wake Me Up When It's All Over"--there was remarkably little carnage in the race, though there were a lot of scrapes and bumps along the way. Yet even with the yellow flag to bunch the cars up, the two Mercs and Daniel Ricciardo's lone finishing Red Bull lapped everyone except Fernando Alonso, sitting in a lonely fourth place.

The race was dominated by the silver divas, with their smash hit "Let It Go." Nico Rosberg had played the gentleman for the longest time, but now that boy was gone. Over just one weekend, Nico stamped his mark on the Mercedes team and the season with authority. After a few "almost there" races, he finally showed that he's going to do whatever it takes to win, including "accidentally" blocking Lewis's last qualifying lap, and keeping a straight face about it in the stewards' room afterward. Hamilton, on the other hand, can't let it go at all. He moaned about everything: Nico's "accident," murky conspiratorial cover-ups involving telemetry data, and the team's decision not to pit him first behind the safety car. Which would have been an odd thing to do, as the leading driver always gets first dibs on the choice of radio stations. Lewis may be the proven superstar, but Nico stole the show. As Jason dela Cruz, our new road test editor, said: It only takes a competitive car to ruin a friendship. And according to Lewis, it's over. Nico? He's having the "Best Day Of His Life."

Everybody's heard Ricciardo's "Roar," but we're still not tired of it. Red Bull Racing's "so-not-number-two" Australian ace lost ground at the start, but finished the race chewing at Lewis Hamilton's gearbox. While hoping for him to overtake the faster Mercedes on this tight track was a vain hope, it still added a little spice to the proceedings late in the game.

"For The First Time In Forever," it was Kimi Raikkonen's turn to shine. He got a great start, dragging himself up behind the Mercedes duo by the first corner. The Ferrari man was the only driver who could match the Mercs during the first stint, and looked set for a podium. Until Bianchi gave him a puncture while he was lapping the Marussia driver. And then, after working his way back into the top 10, there was that other collision. Maybe Kimi would rather just forget it all. This race also seemed prime for a Vettel comeback. But his was shorter-lived. A broken gearbox and possibly blown turbo saw him limp into the pits a few times for quick fixes, but it now looks like there's going to be no quick fix for this season.

Speaking of Jules Bianchi, he must have stayed up all night to "Get Lucky." Other drivers, like Nico Hulkenberg, had a great day, but Bianchi's run was the most epic. After an incredibly eventful afternoon filled with collisions, overtakes and a five-second penalty for taking his previous five-second penalty under a yellow flag, he scored Marussia's first points. Ever. Highlights of the race included doing a Kobayashi on Kamui Kobayashi, barging his way past the Caterham driver at the hairpin. Kamui, on the other hand, was doing his best to prove that "Love Is An Open Door." Kamui was leaving that inside door open all race long, and could be in the running for the "most overtaken driver in a single race at Monaco" record.

Pastor Maldonado must feel he got "Locked Out Of Heaven." After DNF'ing in qualifying in Spain, the last thing he needed was a rare DNS, his Lotus Renault conking out before the formation lap. Jenson Button's unlucky streak, however, is over. The McLaren driver, who hadn't been feeling the love over the past few races, was finally singing "Love Never Felt So Good" after getting some much-needed points in Monaco. And all it took was several front-runners getting shafted for that to happen.

Ericsson qualified 22nd, required to start from pit lane for causing a collision. Bianchi qualified 19th, dropped five grid spots after a gearbox change, then finished 8th, five seconds added to race time for serving a penalty under the safety car. Maldonado stalled on formation lap, and did not start the race. Vettel pitted with gearbox issues, and retired with turbo issues. Q1 red-flagged due to Massa-Ericsson collision. Incident involving Rosberg leaving track in Q3 was investigated after the session, but no penalty was given.

PhilAuto 2014 is not your usual automotive show
View other articles about:
Recommended Videos
Read the Story →
This article originally appeared on Topgear.com. Minor edits have been made by the TopGear.com.ph editors.
Share:
Retake this Poll
Quiz Results
Share:
Take this Quiz Again
TGP Rating:
/20