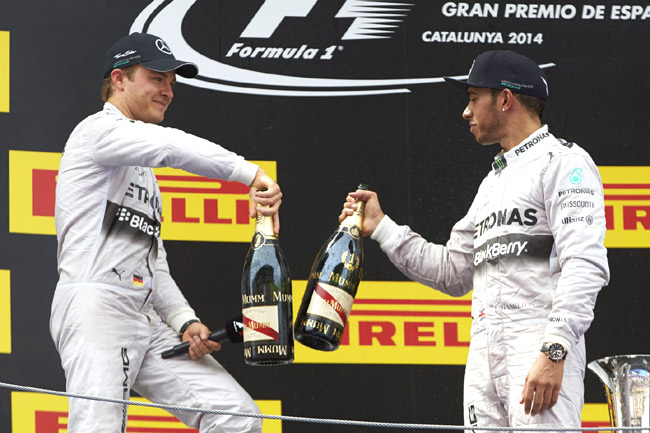 It is said that the rain in Spain falls mainly on Narain (Karthikeyan). But since the World's Fastest Indian isn't on the Formula 1 grid this year, all we got this weekend was the occasional droplet on the cameras, leaving the race cool and dry. With the host of upgrades brought by the teams to the track, it was a bit disappointing that the F1 backmarkers were slower than the GP2 race leaders. Then again, the F1 grid was limited to the "medium" Pirelli tires, while GP2 used the soft compounds. With the Mercs four to five seconds faster than both GP2 leaders and F1 backmarkers, it's pretty obvious these teams have a lot of work to do in catching up.

Mercedes's pace is amazing. With the Mercs lapping everyone up to seventh place, you'd think the race was a boring processional. But far from it. A lot of dramas played out over the afternoon, in multiple track sections and with multiple outcomes. Let's take a look at some of the best of them:

So close yet so far
Daniel Ricciardo may have qualified his Red Bull in third, but he got jumped off the start by Valtteri Bottas's Williams, and didn't get past him until the first round of pit stops. This meant that he was never a threat to Mercedes, despite his podium never being in doubt.

So far yet so close
Sebastian Vettel lost more time off the starting blocks, but made up for it in grand fashion, finishing just eight seconds off his teammate, who was sitting in a lonely third place. And speaking of Vettel...

From zero to hero
Despite losing a gearbox in qualifying, Vettel managed to make good on the promise shown by his pace there by driving his Red Bull from 15th on the grid up to fourth place, overtaking both Ferraris on the track, despite Fernando Alonso being on the same tire strategy. And he nicked another fastest lap record to add to his monumental tally.

From zero to zero
Pastor Maldonado binned his Lotus Renault at the very start of qualifying, pushing way too hard on ice-cold tires. During the race, he seemed ready to blow through the field to get up into the points, but instead earned himself a drive-through penalty for crashing into a Caterham just three laps in. In the end, the only cars he finished ahead of were the backmarkers. Embarrassing. Expected, yes, but still embarrassing.

Kimi finally beats Fernando
The Iceman finally pipped Fernando Alonso in qualifying, by a mere 400ths of a second. And in some brilliant driving and timing, he managed to pip Alonso in each pit stop, covering the Spaniard brilliantly throughout most of the race.

Fernando finally beats Kimi
Despite a creative pit strategy, Alonso always seemed to come out right underneath Kimi's tailpipes on the pit exit. A switch to a three-stop strategy, however, gave him an edge in the last few laps, allowing him to finally flash by the Flying Finn in a thrilling three-corner battle just two laps from the end. The crowd may have been hoping for Alonso to win, but that battle still got them on their feet.

Onward and upward
The Mercedes team overtook every car on track up to seventh place, on a tire-saving two-stop strategy that saw them give up fastest lap to Sebastian Vettel. This is definitely their season to lose.

Downward and downward
The promise shown by McLaren early in the season has fizzled away into consistent out-of-the-points performances. The cars never looked more miserable than when they were being lapped by the race-winning Mercs, though Jenson Button tailing Hamilton for a short while provided some comical relief in the middle of the race. Maybe the team should look at fitting racing slicks to their P1 Supercar, given how badly the new MP4-29 is doing out there.

Even when everything goes right, he still can't win
Nico Rosberg qualified less than two-tenths behind his teammate, and over the course of the race, his pace was incredible. He was faster than Lewis on the "slower" hard tires during the middle stint, setting up a late race battle against Hamilton, who would be on those hard tires for the last stint. Driving to the ragged edge of adhesion, he got just close enough to try a move in the last few laps, but couldn't make anything stick.

Even when everything goes wrong, he still can't lose
With radio issues, setup problems, dog-slow pit stops and Nico breathing down his neck, you could almost feel the steam rising out of Lewis Hamilton's collar as Rosberg got closer and closer. But the edginess in his voice never showed in his incredibly steady driving. He used his tires gently and saved more gas than Nico, leaving enough in reserve to allow himself a fine defense in the last few laps. Still, the tension in the air after that race was quite palpable. No more hugging in parc fermé after the race. It seems like the feud is finally on.

* Gearbox failure
**Served 10-place grid penalty due to unsecured wheel in FP2
***Crashed in Q1, causing session to be red-flagged

All-new Lexus NX small crossover SUV to be launched in PH in August
View other articles about:
Read the Story →
This article originally appeared on Topgear.com. Minor edits have been made by the TopGear.com.ph editors.
Share:
Retake this Poll
Quiz Results
Share:
Take this Quiz Again
TGP Rating:
/20