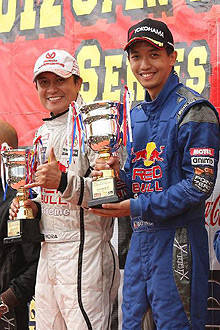 Motor racing, particularly karting, is alive and well in the country. Despite not receiving publicity from mainstream media, a national karting series actually continues to exist, and seems to be doing just fine--as a matter of fact concluding another successful season.

The team's domination of the series was absolute as it won all eight of the Expert-class races, with the victories shared between Mora and Batino. For the Veteran class, Mora bagged six of the eight races. Making the season-ending race even sweeter is Batino being recognized as the 'SQ Karter of the Year.'

Red Bull Supreme Racing team's victory in both the Expert and Veteran classes reportedly marks a milestone for the Philippine National Super Kart Series as this is the first time a single team has won the season championship for both classes.

Congratulations to the winners. Here's hoping karting--and other forms of auto racing, for that matter--enjoys more media coverage to encourage more participants, spectators and sponsors to come in.

So, you want a Toyota 86 ASAP?
View other articles about:
Read the Story →
This article originally appeared on Topgear.com. Minor edits have been made by the TopGear.com.ph editors.
Share:
Retake this Poll
Quiz Results
Share:
Take this Quiz Again
TGP Rating:
/20