Safety and the City 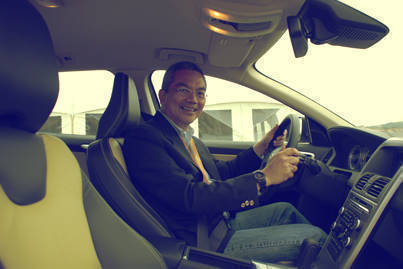 This was the common response I got from people when I told them I was soon flying to Valencia, Spain, for a Volvo test drive. Coming from friends, this response meant a wish for a harmless journey. But coming from my editor, I took it as an instruction for me to be cautious - and to make sure I would return to Manila with the story and the photographs.

As Top Gear had been given exclusive coverage of the Volvo XC60 media test drive in Spain, and as I'd received the assignment pretty close to the event date, it was a solo trip with a tight and punishing itinerary. Within the same afternoon, I picked up my Schengen visa from the Spanish Embassy and boarded a plane bound for Valencia, with stopovers in Hong Kong and Paris. I felt like a contestant in The Amazing Race rushing off to my final destination. To keep on course, I mumbled "Safety First" to myself like a mantra.

Valencia is the third largest city in Spain. It has an interesting history, but also an equally interesting future. From my hotel window overlooking the Plaza del Ayuntamiento, I had a front seat to a replay of history as Valencia celebrated its Dia De La Comunidad Valenciana (or The Day of Valencian Community) with a pompous procession to mark its nationalism.

On the same October day in the year 1238, the Christian army of King Jaime I reconquered Valencia to end over five centuries of Islamic rule.

Some seven centuries later, all of the King's men - the mayor, the cabinet, the clergy, the military and others - garbed in traditional medieval costume, joined the crowd for a procession to carry the Senyera (the original Valencian flag carried by King Jaime¹s forces) around the Old Town.

The biggest sailing adventure ever - the Volvo Ocean Race - and the recent Formula One street race would make the city an excellent and fresh European travel destination. Valencia is best known for its Valencia orange groves, and its warm and dry weather.

For the Swedes, good weather was the key reason for choosing Valencia in which to launch Volvo's new crossover SUV, the XC60. 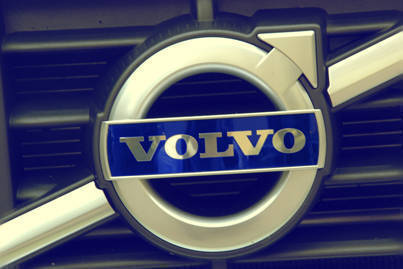 Volvo has become synonymous with safety. Volvo invented the three-point seat belt in 1959, which has since become the single most effective lifesaver on the road. Other carmakers followed suit, and the seat belt became accepted safety equipment. Volvo's cars have over the years been equipped with an ever longer list of safety solutions‹from crumple zones, safety cages, airbags and whiplash protection, to systems for dynamic stability and driving control.

Dressed in a thrilling blend of muscular cross-country capability and the sporty charisma of a coupe, the 2009 Volvo XC60 is stepping boldly into what is currently the automotive world's fastest-growing segment: the "Small Premium Utility" class.

"The new XC60 is our boldest crossover so far," shared Volvo design director Steve Mattin. "This car is charged with more emotive form and far more energy than any previous Volvo model. We're elevating our design DNA to an entirely new level by literally turning up the visual volume. If you say that you¹d recognize a Volvo from a hundred meters away today, I'd say the XC60 radiates a clear Volvo presence from at least twice that distance. In the past, Volvo's interpretation of DNA signified ‘Do Not Abandon' the design traditions. We have now expanded its significance to also include the more exciting ‘Dramatic New Approach'."

"The XC60 has its sights set on a target group that imposes high demands on design, brand integrity and high-tech content in its choice of lifestyle products," added project manager Lennart Odhner at the XC60 presentation at the Hotel Palau de la Mar. "The XC60 could be the C30 owner's next car. It's as sporty and exciting, but way more capable. An all-around car for the person who lives single in the city, and for the young family taking the kids for a weekend of fun and adventure."

The target buyer seems to be the tech-savvy consumer, who depends upon the world of microchips and electronics to stay in the lead. This crossover is also designed for the customer with an active urban lifestyle.

As this car segment's name so clearly reveals, Volvo's new crossover is spiced with the very best from two car types. Down below, the unmistakable and capable XC (cross country) muscles are pumped up, creating a strong athletic body that is complemented by a high ground clearance (230 millimeters) and large wheels. Up above, the flowing lines create the sporty charisma of a coupe. 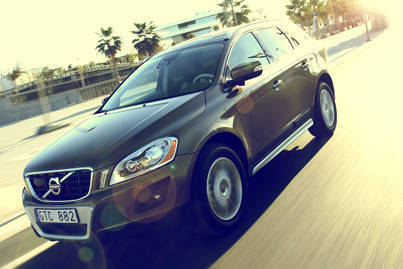 "You will attempt to bump balloon cars today," Volvo senior technical advisor Thomas Broberg instructed the journalists at the starting gate of the City Safety test track at Vallesa de Mandor, an old orange and olive hacienda in the outskirts of Valencia. "Just keep the XC60 at a steady speed between 20kph and 30kph in the direction of the blue balloon car. And do not step on the brakes."

A member of the XC60 safety design team, Broberg was on hand at the media event to answer the technical questions, and to guide the journalists through the test track.

As I took off in the XC60 in the direction of the balloon car, my mind was alternately reciting "have a safe trip" and "safety first." Flashes of a death-wish stunt drive came to mind. Despite all instinct, I took control and told myself to simply follow the instruction. I drove the XC60 straight in the direction of the stationary balloon car, and then the XC60 came to a sudden halt a few inches away without any action on my part. I was impressed with Volvo's idea of safety!

The new XC60 is equipped with "City Safety" as a standard feature. It is Volvo's in-house-developed unique technology for avoiding low-speed collisions in city traffic. City Safety, in combination with the Collision Warning with Auto Brake, means that Volvo can now offer functions for auto-braking at all speeds.

The City Safety's radar scanner is located on the upper part of the windshield, at the same height as the rear-view mirror. It can detect vehicles six meters ahead. Volvo says City Safety will prevent collisions at speeds up to 30kph, when the speed difference between two vehicles is less than 15kph. Under these parameters, the system is designed to focus on reducing speed as much as possible before an impact.

The radar, which emits infrared light that can't be seen by oncoming drivers, continuously scans traffic in front of the car. Calculating the distance between a vehicle in front and the City Safety-equipped Volvo fifty times a second, the system determines the brake force necessary to prevent a collision.

City Safety works equally well during day and night. However, the detection capacity can be limited by dirt, fog, bugs or heavy rain. But as the sensor is within the area covered by the windscreen wipers, it is easy for the driver to keep the sensor area clean.

A collision can thus be entirely avoided. If not, the damage to cars and personal injuries can be reduced. Insurance companies abroad are recognizing this safety feature and granting a reduction in insurance premiums for City Safety-equipped Volvos. We hope insurance companies in the Philippines will follow suit.

For Metro Manila, the typical collision is like a cocktail made from a mixture of the following ingredients: the 18kph average speed in Metro Manila's streets; the stop-and-go traffic; a driver preoccupied and distracted by his passenger, his cell phone, the radio or a billboard; and a sudden stop by the car right in front caused by a bus cutting into its lane. City Safety seems ideal for Manila considering that Pinoy drivers have yet to learn about common road rules like right of way, merging lanes, and basic road courtesy.

It is important to stress that City Safety does not relieve the driver of the responsibility for maintaining a safe distance to avoid a collision. In addition, City Safety does not detect objects smaller than a car, such as pedestrians, motorcycles, bicycles or animals.

For speeds over 30kph, the Collision Warning with Auto Brake warns the driver via an audible and visible signal, and then engages the brake pads to reduce the braking system's response time, before braking automatically if a front collision is imminent. 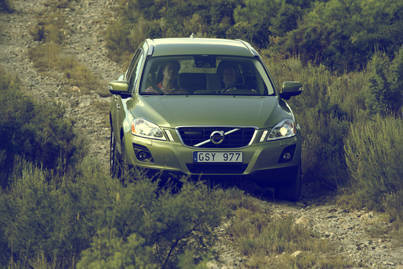 The Volvo XC60 will initially be available with the six-cylinder turbocharged T6 engine producing 285 horsepower, and two five-cylinder turbodiesels (the D5 producing 185hp, and the 2.4D with 163hp).

The engines in the XC60 are mated to a six-speed gearbox - either manual or automatic - with Geartronic. The T6 version also has a Sport mode. Geartronic makes it possible to change gears manually should the driver prefer a sportier driving style, or if he wants to hold on to a specific gear.

We drove on a combination of highways and winding provincial roads. From the driver's seat, the ride is aggressively sporty and yet car-like in comfort. The XC60 in Sport mode was fun to drive, as it responded well to the driver's input.

The XC60 is equipped with Volvo's All Wheel Drive with Instant Traction to guarantee, well, traction. With the help of an electronically controlled clutch, the AWD system distributes drive between the front and rear wheels automatically. The Instant Traction function shifts power from the front to the rear wheels - for instance, when starting from standstill on slippery or loose surfaces.

Interestingly, the power-steering servo assistance can be adjusted via a menu in the information system to comply with the individual wishes of the customer.

The XC60 owners will judge whether City Safety is good technology. I believe that City Safety will follow the three-point seat belt. We can expect other carmakers to take Volvo's lead, and City Safety will become another standard. 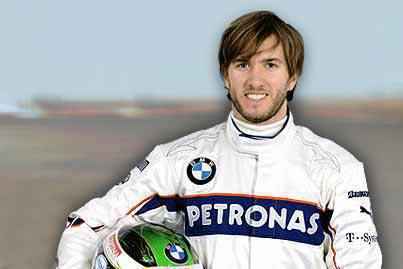 Heidfeld beats Schumi's record
View other articles about:
Read the Story →
This article originally appeared on Topgear.com. Minor edits have been made by the TopGear.com.ph editors.
Share:
Retake this Poll
Quiz Results
Share:
Take this Quiz Again
TGP Rating:
/20