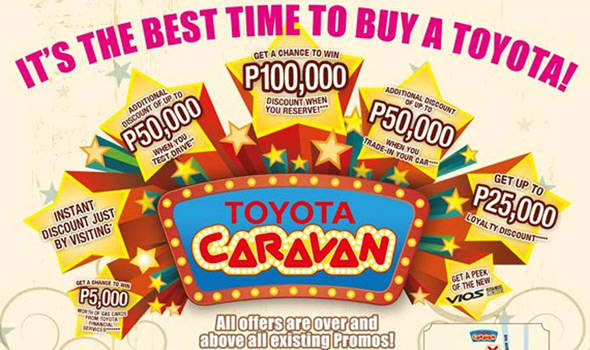 The 2011 Toyota Caravan kicks off on October 6, with buyers set to enjoy deals that may be applied on top of Toyota Motor Philippines' existing promos.

Car shoppers who buy a new vehicle at the Toyota Caravan can get discounts of as much as P230,000. New-car buyers who simply visit the Toyota Caravan are automatically entitled to an instant discount while a test drive gives the buyer as much as P50,000 as an additional discount. Shoppers who trade-in their car for a brand-new Toyota also get a discount of as much as P50,000 while loyal Toyota owners get up to P25,000 off. The biggest discount, however, is P100,000 that may be won by those who place a reservation for a brand-new Toyota.

Buyers who avail of financing plans from Toyota Financial Services also get the chance to win P5,000 worth of gas cards.

A sporty variant of the Vios known as the SE Limited with 15-inch TRD wheels and a mesh grille among other add-ons will be on display at the Caravan.

The 2010 Toyota Caravan proved to be a successful one for Toyota Motor Philippines as over 6,600 visitors dropped by the event with over 2,000 placing their reservation on brand-new cars. With this year's Caravan running a day longer and with the huge discounts being offered--up to P90,000 more than last year--Toyota Philippines is confident it will surpass last year's numbers.

The 2011 Toyota Caravan will be held from October 6 to 12 from 10am to 8pm at the vacant lot on 8th Avenue of Bonifacio Global City behind the Lexus Manila showroom. Entrance is free.

Lamborghini is first Italian carmaker to receive ISO 50001 certification
View other articles about:
Recommended Videos
Read the Story →
This article originally appeared on Topgear.com. Minor edits have been made by the TopGear.com.ph editors.
Share:
Retake this Poll
Quiz Results
Share:
Take this Quiz Again
TGP Rating:
/20