Shell to launch new fuel product in the Philippines 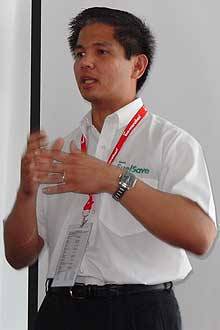 Sepang, Malaysia--Oil giant Shell is firming up plans to bring FuelSave, its newest product designed to help consumers and their vehicles be more fuel efficient, to the Philippine market.

FuelSave contains an additive that allows a motorist to save up to one liter of fuel for every full tank, said Shell vice president for Retail East Cesar Romero (in photo). This claim is based on studies made by Shell and by independent laboratories.

FuelSave was launched in the global market last year. In Asia, it is currently available only in Hong Kong, Malaysia and Singapore.

"There are roll-out plans in the rest of the countries in Asia," Romero told reporters covering the ongoing Shell Eco-marathon Asia. "It's coming very soon to the Philippines."

"It is formulated to act as a surface coating to support smoother gliding (in the engine)," Holthusen said. "Less friction means less energy loss."

Despite potential savings consumers are likely going to get by using FuelSave, Romero assured he product will be affordable to Filipino consumers.

"The pricing policy is that it should not be more expensive than the main grade fuel," he said.

Thai actress is Asia's most fuel-efficient driver
View other articles about:
Read the Story →
This article originally appeared on Topgear.com. Minor edits have been made by the TopGear.com.ph editors.
Share:
Retake this Poll
Quiz Results
Share:
Take this Quiz Again
TGP Rating:
/20