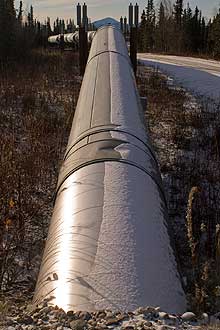 It has been nearly a year and a half since an oil leak from a commercial pipeline used by First Philippine Industrial Corporation (FPIC) was found in the basement of the West Tower residential condominium in Makati City. With government still unable to find any solution to the problem, two solons are now proposing the creation of a national pipeline board to regulate the use of oil and gas pipelines in the country.

"It must be clarified and put into law that oil and gas pipeline systems are national security concerns and that the transport of oil and gas is an act of common carriers and as such requires the owners of the oil and gas pipeline to secure a Congressional franchise before they could operate," said Rep. Rufus Rodriguez (2nd District, Cagayan de Oro City).

House Bill 5477, which Rodriguez co-authored with Rep. Maximo Rodriguez Jr. (Party-list Abante Mindanao Inc.), also requires the owners of fuel pipelines to secure a congressional franchise before they are allowed to operate.

According to Rodriguez, the incident showed the consequence of not having a a governing body that regulates the operation of fuel pipelines in the country and ensures that necessary safeguards and regulations are in place to protect the public from potential disasters that oil leaks could cause, which led to the filing of the bill.

"The creation of this new Board comes at an opportune time considering that the Department of Energy is prioritizing the establishment of gas pipelines from Batangas to Metro Manila and establishing other pipelines in order to improve the delivery of supply all over the country," Rodriguez said.

The bill seeks to create the National Pipeline Board will be responsible for prescribing the safety and environment standards in all aspects of the oil and gas pipeline systems as well as in remediation procedures in cases of pipeline leaks or other physical disturbances.

The bill also states that Congress may grant, upon application to any person or entity, a franchise to construct, install, own, operate and maintain for commercial purposes an oil and gas pipeline system--including such other equipment or facilities as may be needed from time to time--for the purpose of transporting and distributing oil and gas through pipeline in the country.

The measure also limits the term of a pipeline franchise to, but not exceeding, 25 years counted from the date of issuance and is renewable for another 25 years upon application of the grantee filed prior to the expiration of the original term.

A grantee of a pipeline franchise is also required under the bill to pay an annual franchise tax equivalent to five percent of the gross income earned during the year in lieu of all national internal revenue taxes.