Your chance to win the all-new compact car
Aug 30, 2012
CAR BRANDS IN THIS ARTICLE 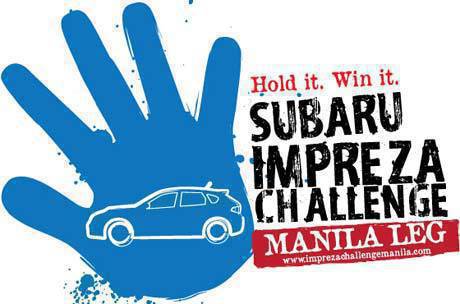 Motor Image Pilipinas has moved the 2012 staging of the Subaru Impreza Challenge's Philippine leg to September 8 after the original date of August 11 was cancelled following the incessant habagat rains that flooded a good part of the metro that week.

To be held at the Bonifacio High Street Activity Area in Bonifacio Global City, Taguig, the Subaru Impreza Challenge is an endurance competition requiring the participants to place their palm on a specific area on the car. The last 10 contestants standing in the Philippine leg will be flown on an all-expense paid trip to Singapore where they will represent the country in the Asian Face-Off of the Subaru Impreza Challenge, to be held on October 27-30. At stake? A brand-new Subaru Impreza worth P1.158 million.

According to MIP, this year's competition will be tougher as different challenges await the contestants. The same rules and regulations used in the regional face-off event will still be used for this competition, so this means that--apart from not being allowed to eat or drink during the challenge and using only their right palms--contestants will be disqualified after being warned three times for any violation. Any accessories, like sunglasses, hats, sweatbands or any change of apparel or footwear, will not be allowed during the challenge. For the five-minute breaks that will be given every six hours, contestants can go to the toilet, rest and recharge with food.

Interested participants must be at least 21 years old as of January 1, 2012; a Filipino passport holder; and in good health condition. They can download the entry form at www.motorimage.net/ph or from the I Love Subaru Facebook fan page. For more details on the event, call the Motor Image office at (02) 727-8333 or (02) 727-3687.

AVID members start 3rd quarter with 27-percent growth
View other articles about:
Read the Story →
This article originally appeared on Topgear.com. Minor edits have been made by the TopGear.com.ph editors.
Share:
Retake this Poll
Quiz Results
Share:
Take this Quiz Again
TGP Rating:
/20