See if you like the styling
by Patrick Everett Tadeo | Jan 11, 2013
CAR BRANDS IN THIS ARTICLE 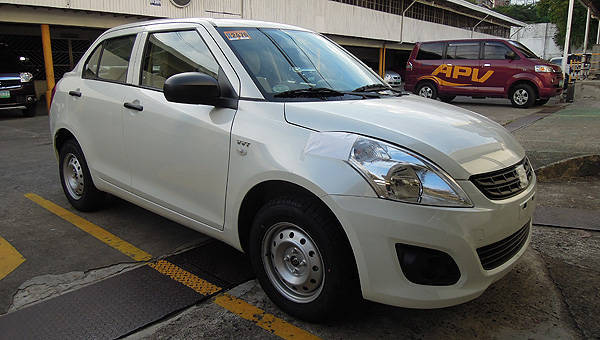 We visited Suzuki Philippines' headquarters yesterday and stumbled upon the latest model the Japanese carmaker will launch in our market. The unit was so new that nobody outside of the company had driven or touched it. We're referring to the all-new subcompact sedan called the Swift Dzire.

Yes, that's how the car is called, which is the same name it carries in the country it's assembled in, India, and in the Latin American markets where it is also on sale. For the Philippines, however, we were told that it might simply be called the Suzuki Dzire, supposedly so it won't dilute the sporty reputation of the Swift hatchback.

The Dzire is basically a sedan version of the Swift, but instead of being powered by a 1.4-liter engine, a 1.2-liter mill rated at 86hp and 114Nm resides under the hood. Paired with a five-speed manual transmission, this small powerplant is expected to be even more fuel-efficient than the already frugal engine of the Dzire's five-door sibling.

The variant you see here is supposedly designed for fleet sales--specifically the taxi market--so its features are quite minimal. According to our contact, this variant's features will likely be limited to just a single-DIN audio head unit and dual airbags. The only letdown--at least in our eyes--is the mainly beige interior, which means the inside is bound to get dirtier faster than a white canvas sneaker on a rainy day.

The Dzire will also supposedly be made available with an automatic transmission, although our source couldn't confirm yet if it would be a four-speed automatic or a CVT. Specs-wise, this clutchless Dzire variant will be more generously equipped, with our source saying it would probably be similarly equipped as the automatic-transmission Swift.

Suzuki hopes to introduce the Dzire to the Philippine market by either March or April with a starting price tag of "less than P500,000." That's encroaching upon Mitsubishi Mirage territory, then.

It looks like the competition for the subcompact sedan market is becoming tighter and tighter. Good for us.

Nissan Motor PH reveals pricing and specs of all-new Almera
View other articles about:
Read the Story →
This article originally appeared on Topgear.com. Minor edits have been made by the TopGear.com.ph editors.
Share:
Retake this Poll
Quiz Results
Share:
Take this Quiz Again
TGP Rating:
/20