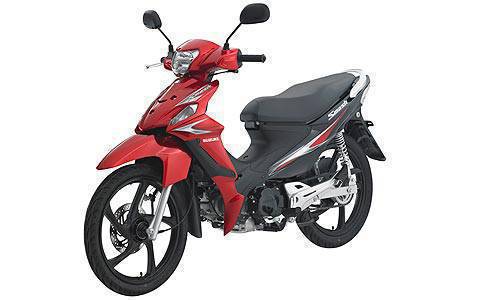 Suzuki Philippines has launched the all-new Smash 115, an entry-level motorcycle model which replaces the old Smash 110.

Though the all-new Smash 115 has a slightly bigger engine than the 110, it’s more fuel-efficient due to Suzuki’s patented Pulsed Secondary Air Injection System, which ignites unburned gases inside the exhaust port, maximizes engine efficiency and ensures cleaner emissions.

“Our tests of the new Smash 115 showed that it can run from 45 to 47 kilometers per liter," said Benedict Arreola, Suzuki Philippines’ senior marketing manager for motorcycles. "The old Smash 110’s fuel mileage was at 42 to 44 kilometers per liter. So while the power output of the 5cc difference in engine displacement is roughly the same, the new Smash is more fuel-efficient than the old model."

Besides being fuel-efficient, Suzuki said the Smash 115 is also more environment-friendly as its large-diameter 100mm muffler has a built-in oxidation catalyzer.

The all-new Smash 115’s design was inspired by Suzuki’s GSX-R sportbike as evident in the front fairing. Its high-wattage multi-reflector headlight is complemented by a multi-polygon reflector rear combination lamp while its instrument pod’s speedometer is sports-watch inspired and has a gear position indicator.

The underbone motorcycle is compact with a 750mm ride height and a 1,240mm wheelbase for easy maneuvers. It has an eight-liter underseat compartment, and a magnetic key shutter to deter motorcycle thieves.

"With the new Suzuki Smash 115, we are confident that we have a bestselling model that will appeal to a large segment of motorcycle fans, ranging from novice riders who want an easy-handling entry level bike, to company employees who want an affordable and reliable vehicle for their daily commuting needs, to experienced riders looking for a durable performance machine," said Suzuki president Satoshi Uchida.

BMW recalls select models due to power braking issue
View other articles about:
Read the Story →
This article originally appeared on Topgear.com. Minor edits have been made by the TopGear.com.ph editors.
Share:
Retake this Poll
Quiz Results
Share:
Take this Quiz Again
TGP Rating:
/20