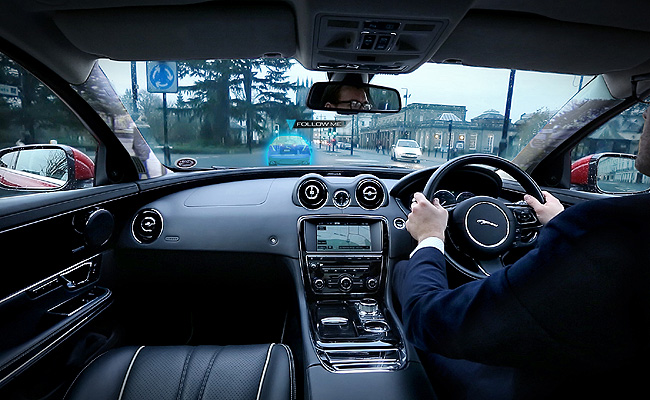 In April, Jaguar Land Rover revealed that it was developing a technology that makes the hood virtually invisible via a camera in the grille that projects the image it captures onto a head-up display to create a 'see-through' view through the hood and engine bay.

Well, the British carmaker has now launched a project that will offer drivers a 360-degree view out of their vehicle. The system works via a screen that's embedded in the surface of each pillar inside the car, and the live video feed from cameras that cover the angles of the car's exterior usually obscured by the blind spots created by the pillars. If the driver signals a change in direction, moves his head to look over his shoulder during an overtaking maneuver, or if the vehicle approaches an intersection, the system will supposedly make the left- or right-side A-pillars transparent.

"Our ultimate aim is to reduce road accidents and enhance the urban driving experience," said Jaguar Land Rover research and technology director Wolfgang Epple. "The Jaguar Land Rover research team is developing this technology to improve visibility and to give the driver with the right information at the right time. If we can keep the driver's eyes on the road ahead and present information in a non-distracting way, we can help drivers make better decisions in the most demanding and congested driving environments."

Another system that Jaguar Land Rover is currently developing is its Follow-Me Ghost Car Navigation system, "which projects an image of a vehicle in front of the driver's car for him to follow, turn by turn, to his destination."

"Driving on city streets can be a stressful experience, but imagine being able to drive across town without having to look at road signs, or be distracted trying to locate a parking space as you drive by," Epple added. "We want to present all of this information on a head-up display in the driver's eyeline, so the driver doesn't have to seek it out for himself and take his eyes off the road ahead."

Solon wants to limit public-utility vehicle drivers to 9 hours of driving
View other articles about:
Read the Story →
This article originally appeared on Topgear.com. Minor edits have been made by the TopGear.com.ph editors.
Share:
Retake this Poll
Quiz Results
Share:
Take this Quiz Again
TGP Rating:
/20